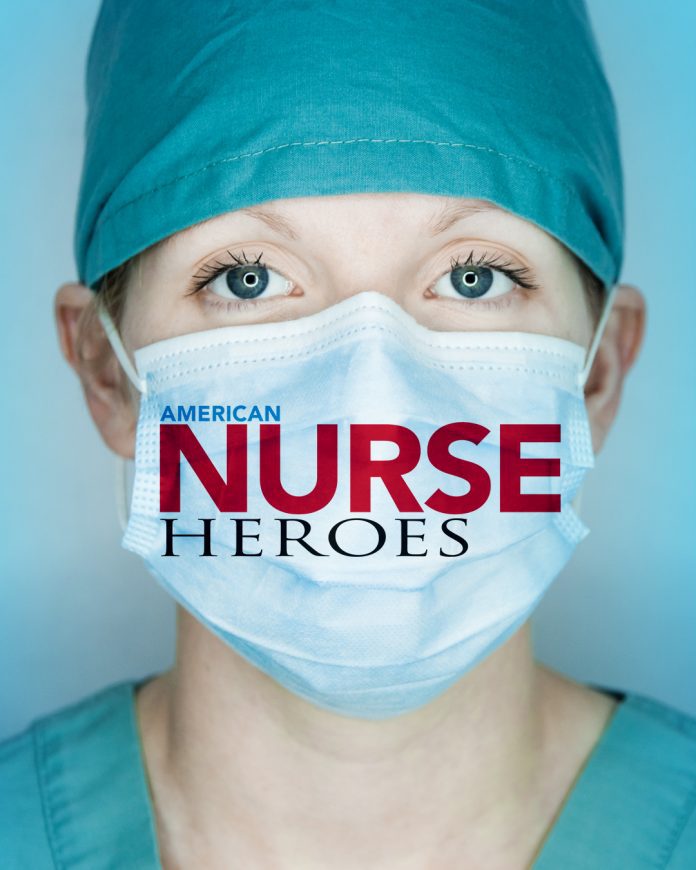 In a clinical encounter, nurses get to interview a patient, asking them the most private of questions, and with the help of a stethoscope (literally and figuratively), listen to the patient’s inner sounds–the whispers of an ailing or healing body. I hold a particular reverence for this clinical conversation since the day I learned what the letters H&P mean. This past April, I received an invitation to be among the nurses to be interviewed for the American Nurse Heroes documentary film. Although, I wasn’t going to answer questions about my expanding medical history, the interview drew a certain parallel with a desk-side or bedside clinical Q&A. I had to fully grasp the questions and provide an honest answer. I felt I was taking part in something larger than myself and I was honoring the great work of nurses who came before me. Articulating what I do as an educator during the filming gave me a confirmation that our collective professional identity as nurses is at the core of what we do on a daily basis. For me, the film is a cinematic validation of the value of nursing care and why the public trusts nurses.

Looking at my prep notes for the interview was like having an inward conversation with myself, a sort of an accounting of blessings received, and renewing promises. Being asked reflective questions that I would never have been asked aloud was quite potent. It allowed me to be silent with my thoughts, even briefly, to consider my life in nursing.

Here I share my thoughts on some of the prompt questions the film director provided me.

How did you get here?

I reminisce on how graduating from nursing school at the age of 19 prevented me from working at a hospital because I couldn’t get my RN license until I was 21. So, I took a job as a public health nurse for the Philippines National Red Cross to train village health workers. It was the beginning of a lifelong affair with teaching and learning.

The last years of the 1980s saw the explosion of the AIDS epidemic in the USA. American hospitals sent representatives to Manila to recruit nurses who had passed the Visa-qualifying nursing and English exam. I showed up at one of these recruitment agencies, signed a bunch of documents, handed them my passport photos, and three weeks later, on January 8th, 1990, I was onboard an Air China plane bound for the melting pot of mankind – New York City. My arrival in JFK was a memorable one. I vividly recall the immigration officer asking me “what kind of work are you going to do?” I replied that I was going to be a nurse. He looked at my visa and declared “taking jobs away from Americans, huh?” Then, he stamped my passport with such vigor the desk shook as he yelled “NEXT”. Eight days later, I started orientation as a float RN, mostly caring for the sickest patients in the AIDS unit – a job, I found soon enough, most Americans did not want.

Looking back on the first few years of my bedside career, I marvel at how I and other nurses managed. In the night shift there were three nurses for a 53-bed unit; we each had 16 to 17 high-acuity patients. Every shift unfolded as a marathon of mixing medications and flushes, handwriting copious notes, and cleaning and turning patients; it was a Sisyphean workload.

In a spring day in 1993, I was walking around Washington Square park and saw the graduate admissions office of New York University. I walked in, and asked about how I could apply to the masters of nursing education program. A couple of months later, I started as a grad student. Right after graduation, I became an adjunct faculty in the undergraduate nursing program.

Teaching is most satisfying for me because I have the privilege of transferring my knowledge and skills to the students, sharing with them the multitude of patient narratives that helped me become a competent nurse, and hearing the students tell me later, after they started working, what they have done with the science and the stories they have learned in nursing school. Being among students allows me to be in a learning osmosis. I love the idea that I may have had a hand in accelerating the clinical judgement skills of new nurses.

Has nursing changed forever because of COVID-19?

The pandemic enabled the public to see the value of nurses and nursing. Although I am no longer a frontline worker, I’d like to think that I made an indirect, albeit small, contribution to the patient care during the pandemic, because I helped educate so many nurses in the past 25 years. The foundations of nursing remain unchanged. What the pandemic has transformed is the performance of certain infection control practices, and the use of healthcare technology. COVID 19 highlighted the importance of team communication, our sense of duty, and going above beyond for the patient and the community. I have the impression that mask wearing among healthcare workers will stay for a while or might even become standard of practice.

Nursing as a choice

Healthcare is one of the indispensable human services. We cannot live well without it. It is safe to say that many people choose a career with consideration for the financial rewards. But I think there are many intrinsic motivators on why people go into nursing, such as gaining a unique sense of purpose, providing empathy, and belonging to the most trusted of professions.

I’d like to think that students are inspired by the pandemic because it validates their choice to become a nurse. The pandemic made the public very aware of what nurses do, particularly in a frenetic health crisis. The 7 o’clock clapping and cheering for healthcare workers was a moving daily tribute that went on for months. The only other time I remember the public burst into spontaneous applause was for firefighters in the months after 9/11.

Ongoing interview with myself

Being interviewed for the film gave me an uncommon opportunity not only to know, but to understand myself. It is like being aware of one’s footsteps while marching towards finding meaning in the work I do, treading carefully, and looking back, every now and then, to make sense of the journey.

To learn more about American Nurse Heroes, visit www.americannurseheroes.com. Tune in for the world premiere on Thursday, June 24 at 8 p.m. on the Discovery Life channel.