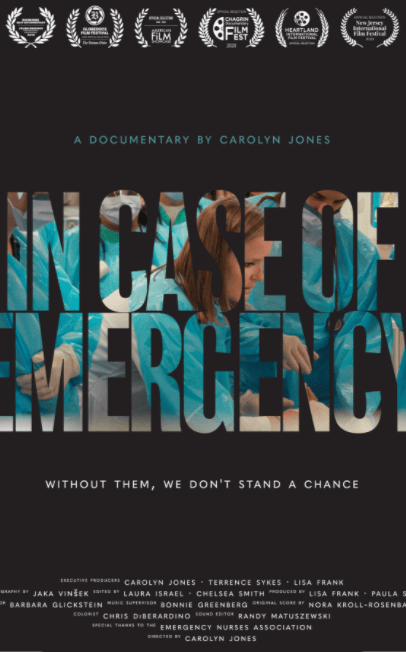 Join filmmaker Carolyn Jones for the Virtual Premiere of ‘In Case of Emergency’ on October 14th at 8pm ET followed by a live panel discussion with the filmmakers and nurse stars! Reserve your ticket here.

CBS Sunday Morning’s film critic David Edelstein “recommends new non-fiction films that will expand your world, at a time when our worlds are so severely contracted” and we are so proud that he chose to include our film as one of his recommendations! Edelstein writes “For a more positive… view of medicine at the front lines, Carolyn Jones’ “In Case of Emergency” depicts emergency rooms all over the U.S. through the eyes of nurses who attempt, in a dysfunctional system, to keep overwhelming human misery in check.

Robin Cogan, MEd, RN, NCSN is a Nationally Certified School Nurse (NCSN), currently in her 20th year as a New Jersey school nurse in the Camden City School District. She serves on several national boards including The American Foundation for Firearm Injury Reduction in Medicine (AFFIRM), a gun violence prevention research non-profit organization and the National Board of Certification for School Nurses (NBCSN). Robin is the Legislative Chair for the New Jersey State School Nurses Association (NJSSNA). She is proud to be a Johnson & Johnson School Health Leadership Fellow and past Program Mentor.