You might be surprised by what your colleagues are saying about salary, workplace violence, and job satisfaction.

American Nurse Today’s third annual Nursing Trends and Salary Survey is providing a lot of fodder for discussion among nurses. Despite ongoing challenges (such as increasing workloads) in the profession and healthcare in general, 84% of survey respondents say they would choose to become a nurse again (similar to the 85% reported last year). According to a PARADE/Yahoo! Finance Job Happiness Survey, only 41% of working Americans in general say they’d choose the same career again.

• About six out of 10 respondents had a salary increase in the last year.

• 60% of survey respondents report their workload has increased (slightly higher than the 58% reported in 2018).

• More than half of respondents who were victims of violence, verbal assault, sexual harassment, or bullying on the job aren’t satisfied with how the situation was handled.

• About eight out of 10 respondents are satisfied with their jobs and would pick nursing again as a career. 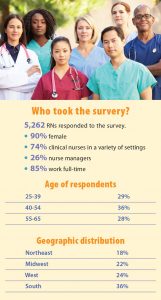 Workplace violence: Is it getting any better?

More than half of survey respondents (59%) report having been verbally assaulted by a patient in the past 2 years, and 43% have been verbally assaulted by a patient’s family member or visitor. In both cases, more than half of respondents who reported the incident weren’t satisfied with how the situation was handled (51% for patient verbal assault; 55% for family verbal assault). One nurse commented, “There is too much emphasis placed on patient satisfaction, and nurses do not feel empowered to have disruptive family members removed from the bedside or facility.”

In addition, physical violence from patients may be on the rise. Nearly a quarter (23%) of respondents have been physically assaulted by a patient, as compared to 20% last year. A total of 72% of respondents who were physically assaulted reported the incident, but only 44% were satisfied with how it was handled. One respondent said, “Workplace violence needs to be addressed, with nurses being confident that any reporting will not result in retaliation, but support and action.”

Nipping workplace violence in the bud

• 90% of respondents report that a protocol exists in their workplace for handling violence.

• More than three quarters of respondents (76%) have received de-escalation training, with 83% saying it is helpful.

• Many respondents (73%) who received training have had the opportunity to apply it in practice.

Bullying and verbal assault by coworkers

Survey results show that bullying and verbal assault continue to be a problem in the healthcare workplace. The prevalence of verbal assault among coworkers hasn’t changed much from the 2018 survey. In 2019, 35% of respondents say they had been verbally assaulted by a healthcare provider in the past 2 years, as compared to 36% last year. A total of 64% reported the incident, but only 25% were satisfied with how the situation was handled.

Nearly 46% of nurses say they have intervened when they witnessed bullying, and 77% reported the incident. However, only 48% were satisfied with how the situation was handled. According to one nurse respondent, “More needs to be done to stop nurse-on-nurse bullying. Managers need more training, and victims need to quit being blamed as part of the problem when they report it.”

Me Too: Sexual harassment on the job 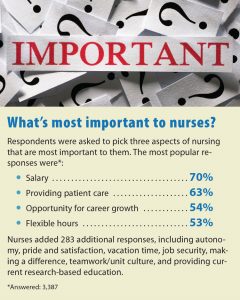 The percentage of responding nurses who experienced sexual harassment has dropped slightly from 10.5% last year to 9% this year. However, just as in other work environments, sexual harassment in healthcare is thought to be underreported and not handled satisfactorily. The survey found that 70% of respondents who were harassed didn’t report the incident. Of those who did report it, many (69%) were dissatisfied with how the situation was handled. Fear of retaliation may be another factor. For example, one nurse stated, “I reported a physician for sexual harassment, and I was terminated after 21 years.”

The sexual harassment of male nurses by females also may be underreported. One respondent said, “As a male, I get sexually harassed by female coworkers, and I’m embarrassed to report it because I feel it will make me less masculine.” 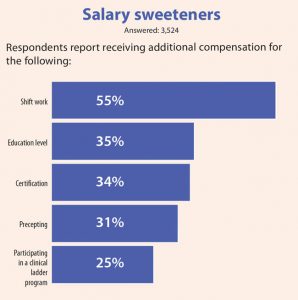 Demand for nurses is putting them in the driver’s seat when it comes to salary.Respondents report that 62% (65% of managers, 60% of clinical nurses) have had a salary increase in the past year, up 2% from last year’s survey. Despite this, compensation still may not be keeping up with the cost of living and the value nurses put on their skills. Only six out of 10 respondents say they’re satisfied with their salaries.

Eight out of 10 survey respondents say they’re satisfied with their current jobs. This corresponds with the 84% of respondents who say they would choose nursing as a career again. In comparison, about half (49%) of American workers in general say they are very satisfied with their current job, according to the 2016 The State of American Jobs study by Pew Research Center.

Satisfaction with other important factors related to job satisfaction varies”

• 9 out of 10 respondents are satisfied with their relationship with their peers.

• 7 out of 10 are satisfied with the amount of authority they have.

• 6 out of 10 are satisfied with the support they get from management who is not an immediate supervisor. 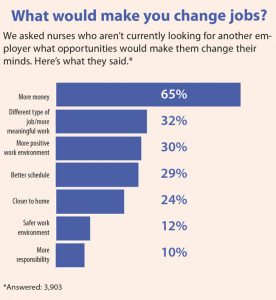 How are the benefits?

Most, but not all, survey respondents report receiving some employment benefits. Most receive major health benefits, including sick and vacation time (86%), health insurance (82%), dental insurance (77%), and retirement contributions (76%). Less than 60% receive bonuses, disability insurance, professional liability insurance, and reimbursement for tuition and certification. Only 5% of respondents receive no benefits, but a few of these nurses commented that they work part-time, as needed, or per diem. The percentages of all major benefits are similar among both managers and clinical nurses.

Although recruiting nurses remains an ongoing challenge, the good news is that only 10% of respondents plan to retire in the next 2 years. Almost 57% of clinicians and 52% of managers aren’t planning to retire until after 2025. In addition, 42% of respondents say they plan to stay with their current employer for 5 years or more. However, in a different question, 76% say they’re currently seeking a job with another employer or plan to in the next 3 months. 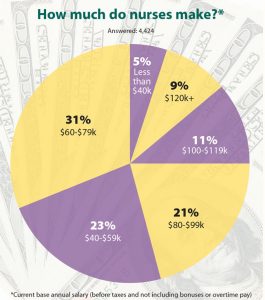 Of those who are planning to stay, 65% would change their minds for more money.

In total, 71% of respondents have been with their current employer for less than 10 years (more than half for less than 5 years).

Most survey respondents who are managers (77%) work in a clinical setting, such as a hospital, ambulatory care, or extended care, and 8% work in academia. Almost 25% directly supervise fewer than five employees, and 16% directly supervise more than 50 employees. Most mangers (88%) report working 40 or more hours a week. Many of them regularly work long hours, with 23% working 46 to 50 hours a week, and 6% working more than 60 hours a week. Only 12% work less than 40 hours per week. Two thirds of responding nurse managers have been in their role for less than 10 years. 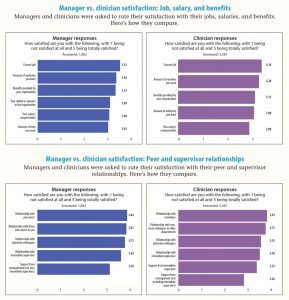 Staffing continues to be challenging for managers, and difficulty filling positions may be increasing. The survey found that 54% of respondents have seen an increase in open positions in the past 12 months, as compared to 52% last year. Additionally, 64% of this year’s respondents (vs. 63% last year) report that recruiting nurses is more difficult, and 56% say that turnover has increased.

Other key takeaways from manager respondents include:

• 19% of nurse managers use an acuity-based staffing system, but these respondents only include managers who work in a hospital setting. 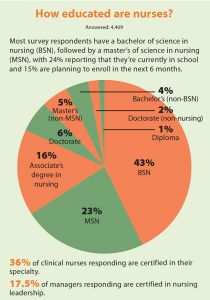 More than half of clinical nurses who took the survey identify as clinical/ staff nurses (57%). About nine out of 10 of all clinicians work in a clinical setting, such as a hospital, ambulatory care, or extended care, and 60% work in acute care. Respondents included 7% advanced practice nurses, 77% of whom are nurse practitioners. The most common specialties include medical-surgical, critical care, cardiovascular, emergency care, psychiatric/mental health, pediatrics, and perioperative services.

Other key takeaways from clinical nurse respondents include:

• Almost 9 out of 10 are satisfied with their relationships with physicians.

The end of the COVID-19 pandemic is in sight. Nurses may think the mental and emotional stressors experienced at the height of the pandemic...
Read more
ANA on the Frontline

ICN Annual Report looks back on an extraordinary year  The 2020 International Council of Nurses (ICN) Annual Report covers a momentous year in the organization’s...
Read more