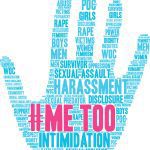 The #MeToo movement has taken the world by storm, and many say it’s been a long time coming. The New York Times revelation last fall seemed shocking at the time—famed Hollywood producer Harvey Weinstein was accused by multiple women of sexual misconduct in what appeared to be an alleged pattern of psychological manipulation and strategic harassment spanning decades. Apparently, some victims were paid for their silence. Most reactions I heard about the “Weinstein phenomena” from news reporters and colleagues agreed about one key point: It was wrong.