Over 4,500 nurses from coast to coast gave us their thoughts on everything from job satisfaction to salary and benefits. Here’s what they had to say.

Editor’s note: Because of rounding, the total of some percentages may not add up to exactly 100%.

American Nurse Journal’s fifth annual Nursing Trends and Salary Survey offers a mixed bag of results pertinent to the present and future of the nursing profession. Recruiting challenges top the list of potential concerns, but as we begin to emerge from the COVID-19 pandemic, job satisfaction rates within the profession remain steady.

Despite the most challenging working conditions in our lifetimes, 80% of the 4,517 nurses who replied to our survey indicated they would choose nursing as their profession again. That’s down slightly from last year’s figure of 85% but aligns with a Conference Board Survey that found job satisfaction reached a 20-year high in 2020 despite the pandemic.

Reflecting current news, survey results indicate that the profession has entered a challenging period in terms of nurse recruitment and retention. Among nurse manager respondents, 71% report that the number of open positions has increased over the past 12 months (up from only 45% in 2020); 72% cite an increase in RN turnover as a challenge (up from 50% in 2020).

Compounding the issue is an increase in difficulty recruiting new RNs, which 76% of nurse managers cited as a growing problem in the past year. We asked about the role of the COVID-19 pandemic in staffing, and it’s clearly a contributing factor, with 73% reporting an increase in staff shortages.

Here’s a sampling of remarks from nurse managers about the recruitment challenges they’ve faced recently:

Despite recruitment struggles, nurse managers report a strong sense of satisfaction within their working environments and generally are satisfied with the opportunities and perks offered by their employers.

We asked managers to rate their level of satisfaction in each of five categories (1 = not at all satisfied, 3 = satisfied, and 5 = totally satisfied):

So which direction are the salaries moving? Of those who responded, 60% said that they’ve seen a raise over the past year, an encouraging sign that salaries are generally on an upward trend. When asked about benefits, respondents said that paid time off was the most commonly offered (82%), followed by health insurance (80%) and dental insurance (76%). Other popular benefits included the following:

For the purposes of the 2021 Survey, we grouped the United States into four distinct regions: 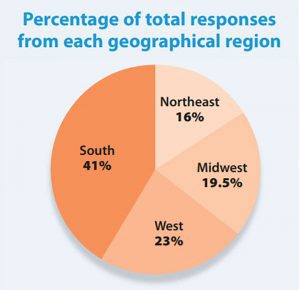 Most nurse managers (63%) are supervising fewer than 20 employees, with 43% in charge of 10 or fewer. However, a significant number (16%) answered that they’re directly responsible for 50 or more employees on any given day. 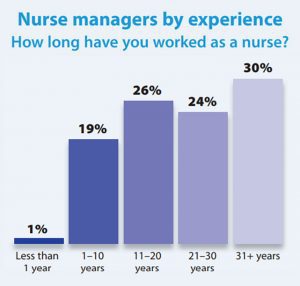 We saw an impressive increase in managers certified in leadership over the past year (27% in 2021 compared with only 18% in 2020). That figure is even more notable considering the demands of the pandemic.

Many nurse managers (78%) believe their workload has increased in the past year, similar to the 77% who said likewise in 2020. Almost two-thirds of managers (63%) said they’ve been working for their current employers for less than 10 years, and most (54%) have been in the profession for over 20 years.

Other interesting observations from our managerial respondents included the following:

What keeps you awake at night?

We asked nurse managers, “What about the future workforce and/or workplace keeps you awake at night?” Here are a few of the more than 800 responses we received:

Among clinician respondents, 39% reported a certification in their chosen specialty, a small decline from 42% in 2020. Responses were just about evenly split between those who do and don’t work 12-hour shifts on a regular basis.

A few concerning answers from clinicians included the fact that, although only 12% report serving on a staffing committee, nearly half (49%) said their organization doesn’t have a staffing committee at all. This may partly explain why only about half (51%) of clinicians think staffing assignments are appropriate to meet patient needs at least 80% of the time. 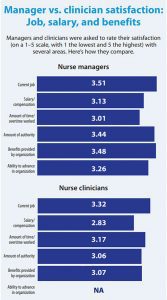 The most noticeable difference between clinicians and managers was in terms of satisfaction. “Amount of time worked” changed to “Amount of overtime you work” for clinicians, but otherwise the questions were identical, except clinicians didn’t answer the “Ability to advance in organization” question.

We asked nurses to rate their level of satisfaction in each of five categories (1 = not at all satisfied, 3 = satisfied, 5 = totally satisfied):

The pandemic’s impact on nursing

The profession continues to face significant challenges related to the COVID-19 pandemic. What’s the damage? About 4.5% of survey participants said they had plans to leave nursing in the wake of the pandemic. Interestingly, nurse managers were almost twice as likely as clinicians to indicate a change in career plans.

Using the 1–5 scale, nurses indicated an average satisfaction level of 3.33 with their employer’s response to the pandemic; 75% said they were “satisfied”. But when answering the question “How prepared is your organization to handle a surge in patients from a pandemic, natural disaster, or another reason for a sudden influx in patients?”, only 55% indicated that preparation was sufficient.

Nurses shared their thoughts about how the pandemic has affected nursing’s future. Here’s a sampling:

Workplace violence—What’s being done, what can be done?

For the past several years, we’ve looked at workplace violence and asked nurses several questions about its prevalence and how the problem is addressed in their respective workplaces.

This year’s information is particularly interesting, with the Joint Commission’s new workplace violence-related mandate scheduled to go into effect in January 2022. Next year, hospitals will be required to conduct annual analyses related to workplace violence prevention programs and take action to mitigate or resolve any risks based on their findings.

According to our survey results, hospitals have their work cut out for them. Almost half (48%) of our respondents reported intervening after witnessing an instance of bullying over the past 2 years; 43% said they hadn’t seen any such behavior. Just over half of respondents indicated they had personally been victims of verbal assault or bullying by a patient in the same timeframe, with 73% of those reporting the incident via oral or written report (or both). 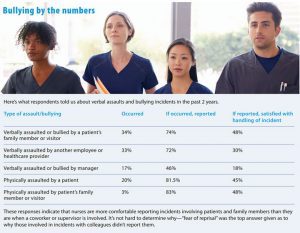 Although these numbers aren’t greatly changed from previous Trends and Salary surveys, the sheer magnitude of incidents remains alarming.

“We’re often made to feel as if being victims of violence and abuse… is part of the job,” commented one nurse. Another said, “Organizations need to promote a safety net of support to the victims.”

Of respondents who didn’t report incidents, 86.5% chose not to because they either felt the instance wasn’t serious enough to warrant a report or they felt nothing would be done to address the situation.

When asked if they’d experienced sexual harassment at work in the past 2 years, 10% said yes; 48% reported the incidents. The top reasons for not reporting these events were that the victims didn’t believe they were serious enough to merit a report or that they wouldn’t be taken seriously. For those who did report, 42% expressed satisfaction with the resolution.

“Patients and their families have become more aggressive towards nursing staff,” shared one respondent. “This puts more pressure on staff and their mental health. There is no social awareness on how patients and families abuse and mistreat healthcare workers.”

“I had to leave my position to get away from a bully boss that I reported [after I] received retaliation,” added another. “We need to come together to prevent these behaviors and remove these leaders from their positions. We need to have zero tolerance for bullying.”