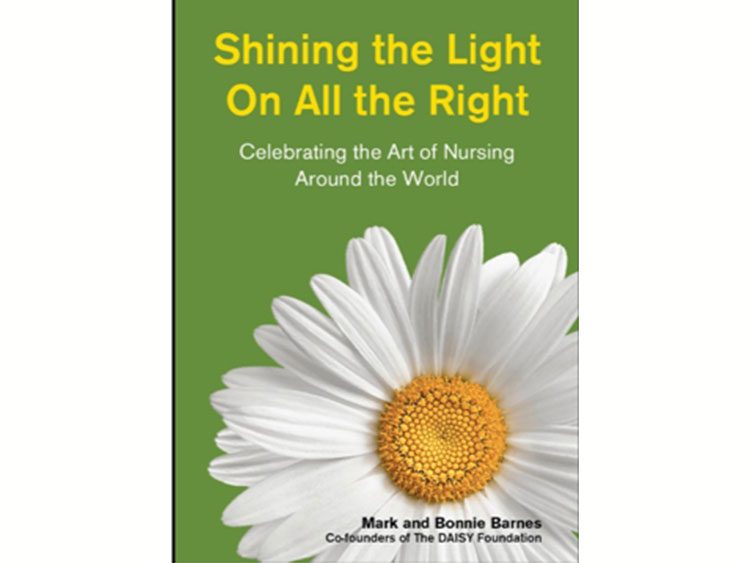 Community highlight – Shining the Light on All the Right: Celebrating the Art of Nursing Around the World

American Nurse would like to highlight a new book released by The DAISY Foundation to celebrate its 20th anniversary, as well as the World Health Organization’s Year of the Nurse and Midwife initiative.

The newly released Shining the Light on All the Right: Celebrating the Art of Nursing Around the World by Mark and Bonnie Barnes, co-founders of The DAISY Foundation, tells the story of how their family’s gratitude evolved into a prestigious award that recognizes the remarkable contributions nurses make every day.

American Nurse would like to congratulate Mark and Bonnie on the book and share a sample with our readers.

Excerpt from chapter: The Power of Stories and Gratitude

I grew up on a dairy farm with seven siblings. My parents said if we wanted to go on to college we would have to pay our own way. Wanting to be a nurse from childhood, I worked as a nurse aide for several years and saved my money to go to nursing school. When I went to pay my admissions fee, I found they had raised tuition significantly, and I didn’t have enough money to enter the program. My dad said he would somehow work something out to get the money. A few weeks later, he took me back to the school and put down the remaining money needed. It was only when we got home that I realized he and Mother had sold our prize milk cow to get the money. The cow’s name was Daisy. When I heard Bonnie and Mark’s story, I loved the idea of yet another way to recognize my nursing staff. But the name Daisy held a special place in my heart.

We have loved that story since the day we heard Jane Swaim, then the chief nursing officer at St. Elizabeth’s Healthcare, tell it to us in 2007. Truth is, we had to reach out to her to get the story again when we were writing this book. We were bad at recording any stories back then. We didn’t start featuring DAISY Honorees and their nominations on our website until that same year. Our early nomination forms and many of those from our partner hospitals didn’t have much room for those stories, either. Some of them were just a small sheet of paper you tore from a pad. To help sustain our program, we asked our participating hospitals to create their own criteria that fit their culture under the banner of compassionate care, which is what DAISY was established to recognize. So many of the hospitals’ criteria were things like positive attitude, meeting patient and family needs, collaborating with the healthcare team, and interpersonal skills. But then the form had just a line or three for an explanation. They read, well, clinically. Some didn’t even use the word compassion, despite our mission. As a result, a lot of the early nominations went something like, “Mary was a wonderful nurse. She went above and beyond to take care of us during this time.”

Shining the Light on All the Right: Celebrating the Art of Nursing Around the World is available on Amazon for purchasing. For bulk orders, please go to The DAISY Foundation’s website.