MATTHEW* is a previously healthy 5-month-old baby hospitalized for poor feeding and lethargy secondary to bronchiolitis resulting from respiratory syncytial virus (RSV). He’s been on the general care pediatric unit for 24 hours when Wayne, his bedside nurse, notices an increase in Matthew’s work of breathing. His vital signs are axillary temperature 100.04° F (37.8° C), heart rate (HR) 150 beats per minute (bpm), respiratory rate (RR) 70 breaths per minute, and an oxyhemoglobin saturation (SpO2) of 89%. Even after Wayne places Matthew on oxygen via nasal cannula and increases the rate to 2 liters per minute, his SpO2 improves only to 90% and his work of breathing persists. Wayne calls the rapid response team for further assessment and possible escalation of care.

Natalie, the rapid response nurse, arrives at Matthew’s bedside and notes nasal flaring, intercostal retractions, and tachypnea. On auscultation, she finds mild crackles in all lung fields, and she notices that Matthew has rhinorrhea. Natalie gently suctions both nares for copious amounts of secretions with minimal improvement in his work of breathing. She then initiates naso- and oropharyngeal suctioning to help Matthew elicit a cough and clear thick obstructing mucous. After Matthew rests for a minute, his HR is 130 bpm, RR 50, and SpO2 97%. 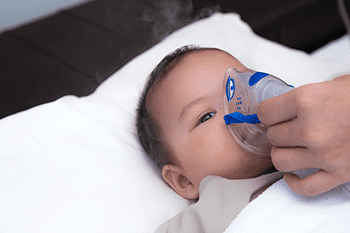 Natalie talks with Wayne about the importance of suctioning and mucous clearance, especially the nares of infants who are preferential nasal breathers. Natalie recommends that Wayne suction Matthew’s nares as needed to ensure patency for adequate oxygenation and ventilation and to suction the naso- and oropharynx if nasal suctioning doesn’t help. Natalie understands that nasopharyngeal suctioning isn’t evidence-based, but she also knows that it’s a nursing intervention that may provide temporary relief for the patient and prevent further escalation in care. Natalie also talks to Wayne about proper patient positioning to prevent neck flexion and further airway obstruction.

A number of characteristics place pediatric patients at risk for decompensation—the leading cause of cardiac arrest in pediatric patients—during a respiratory illness such as RSV. Pediatric patients have narrow airways, so the loss of diameter that may occur with inflammation often leads to increased airway resistance and increased risk of obstruction. Infants and children also have large tongues that tend to move to the posterior of the mouth and a large occiput that places their neck in a flexion position. In addition, infants younger than 6 months old are preferential nasal breathers, which places them at high risk for respiratory failure caused by mucous obstruction.

Care for infants and children with RSV is primarily supportive and may include mucous clearance. Nasal suctioning is a minimally invasive, simple nursing procedure that can be performed by acute care nurses and family members. Nasopharyngeal suctioning may produce vagal stimulation leading to transient bradycardia; however, with proper technique and judicious use, it may prevent further decompensation and escalation to the intensive care unit (ICU).

Natalie’s assessment and interventions not only provided prompt nursing care to a sick patient and helped support the acute care nurse, but also avoided an admission to the ICU and further decompensation.