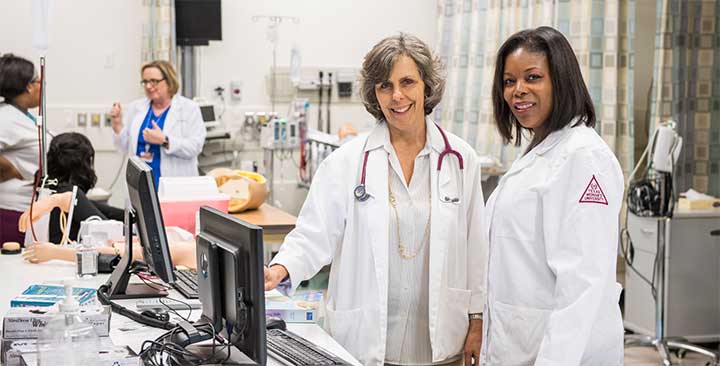 Helen O’Shea, PhD, RN, hasn’t retired completely from her role as a nurse educator, and that is very fortunate, for the number of nurse faculty is dwindling, with many saying the shortage has reached crisis proportions.

O’Shea also is part of the solution. Every summer she conducts a post-master’s teaching certificate program, which she developed at Emory University in Atlanta in 2003—the same year she retired from her full-time faculty role.

The Georgia Nurses Association member is among a chorus of nurse leaders in academia and professional nurses associations calling for a range of programmatic and financial resources to boost the number of qualified educators. “The state of Georgia is experiencing a shortage of nurses, but schools of nursing have waiting lists with qualified students because there aren’t enough faculty to teach them,” O’Shea says.

Beverly Malone, PhD, RN, FAAN, chief executive officer of the National League for Nursing (NLN) and a past president of ANA, says that nurse faculty are a crucial part of the nursing workforce pipeline. “Right now, we have a global nursing shortage,” Malone says. “When we look at who’s going to teach the nurses needed to meet the demand, it’s really an extreme crisis.”

To effectively tackle the faculty shortage, Malone believes the barriers that prevent nurses from choosing the faculty role, such as pay, image, and fewer nurse educator career tracks in schools of nursing, need to be overcome. “We also need to shore up funding for the government programs that provide financial assistance to nurses who want to pursue faculty roles,” Malone says.

By the numbers
The latest data from the American Association of Colleges of Nursing (AACN) found that 42,866 qualified applicants to baccalaureate and graduate nursing programs were turned away in 2006, largely due to an insufficient number of faculty. This shortfall is nothing new.

Among all pre-licensure RN programs, an estimated 92,000 qualified applications were not accepted, according to the NLN’s Nursing Data Review, Academic Year 2004-2005: Baccalaureate, Associate Degree, and Diploma Programs, published in 2006.

Looking at another statistic, there were nearly 1,400 vacancies among budgeted faculty positions in all pre-licensure RN programs in 2006—just over a 6% vacancy rate—according to the NLN’s Nurse Educators 2006: A Report of the Faculty Census Survey of RN and Graduate Programs.

“What we’re anticipating is a very large jump in the number of vacancies based on the number of nurse faculty who are expected to retire,” says Kathy Kaufman, PhD, the director of research at the NLN. Specifically, almost half the nurse faculty polled in 2006 said they were very or somewhat likely to retire in the next 6 to 10 years.

When looking at the reasons—other than retirement—nurse educators gave for leaving their faculty positions, about 65% said they were seeking better compensation; 46%, more advancement opportunities; and almost 40%, more balance between work and other life activities. The NLN-polled faculty members also reported increased compensation and part-time opportunities as successful strategies in recruiting nurses to the teaching role.

Recruitment and retention strategies
ANA continues to work with federal lawmakers to gain more funding and expansion of programs that can help boost the number of nurse faculty.

For example, ANA supports the expansion of the federal “Troops to Teachers” program, which was established in 1994 to help former service members earn their teaching credentials. The proposed program, called “Troops to Nurse Teachers” (TNT), would provide financial inducements to encourage nurses retiring from the military to pursue a second career as a nurse faculty member, according to Erin McKeon, associate director of ANA’s Department of Government Affairs.

For military nurses who already have a master’s or doctoral degree in nursing or a related field, TNT would provide them with “transitional assistance” to help them gain a faculty position. It includes career placement assistance, transitional stipends and educational training, according to the office of Senator Richard Durbin (D-IL), who was expected to re-introduce the measure. Financial assistance would be limited to $5,000, and nurses would be required to become mentors to nursing students and encourage their entry into the military.

The other major component of TNT is a scholarship program, which would provide up to $30,000 annually to help nurses with educational expenses associated with their nurse faculty education. In turn, participants would be required to teach at a nursing program for 3 years upon graduation.

In addition to ANA’s ongoing efforts to increase federal funding for nurse education, including the fast-track faculty loan repayment program, ANA supports the “Nursing School Capacity Act of 2007” (HR 677). This measure, introduced by Representative Rush Holt (D-NJ), would require the National Academy of Sciences to research the reasons behind nursing schools turning away qualified applicants, sources of the faculty shortage, and measures to improve nurse retention.

One of the nurse educators featured in campaign materials is Carol Toussie Weingarten, PhD, RN, an associate professor at Villanova University’s College of Nursing in Philadelphia and chair of the Cabinet on Nursing Practice and Professional Development for the Pennsylvania State Nurses Association.

Since the campaign was launched in 2004, Weingarten says she frequently has been contacted by nurses interested in pursuing a career in education. “I became involved in the campaign, because I feel I have responsibility to do more to ease the faculty shortage, which is affecting everybody,” Weingarten says. “The campaign really has brought visibility to nurse educators and what we do.”

But more needs to be done. “We must promote nationally and at a grassroots level the benefits of a career in nursing education,” Weingarten says. “We need to talk with our nursing students and the public about our role and why we believe it’s the best job in the world.”

Weingarten believes that other solutions to recruiting and retaining nurse faculty lie in making advanced education programs more accessible; offering faculty diverse career paths; and creating more opportunities for them to have joint appointments in education and practice settings.

Bolstering nurse faculty
Accessibility and creativity are key to the program that O’Shea started at Emory. Nurses participating in the post-master’s teaching certificate program attend all-day workshops for 2 weeks in early summer, followed by 6 weeks of homework and online activities, 2 more days on campus, and then a fall internship with a nurse mentor. The internship can be as an unpaid teaching assistant or as a paid faculty member. Program content ranges from learning theory, to curriculum and course development, to evaluation strategies for classroom and clinical. To be admitted, nurses must have a master’s degree in nursing and at least 3 years of clinical practice experience.

“The unique features of the program are that students are totally immersed in the process, and they get immediate feedback,” O’Shea said. “Students who complete the program say they feel confident and prepared to teach, and those are factors that ultimately enhance faculty retention.”

So far, 23 nurses have completed the program, and all are teaching at least part time. Those with many years of experience generally decided to pursue the program and a teaching position because they wanted to remain in nursing, but their current clinical jobs were too physically taxing, according to O’Shea’s survey. Those with less experience spoke of always wanting to teach.

Jeanette Merriweather, MSN, RN, CNN, participated in the Emory program. “When I was working in a hospital setting, I saw new nurses coming in feeling unprepared for the enormity of the job and the judgment it takes,” says Merriweather, currently an assistant nursing professor at Augusta State University in Georgia. “I wanted to see if I could better prepare them.”

Even though she had some college teaching experience under her belt, Merriweather came away from the Emory program with a greater understanding of learning styles and curriculum development, as well as a well-thought-out philosophy of teaching. “I’m happy with my faculty role,” Merriweather says. “It’s more challenging than I thought, but I feel I can really make a difference in the way future nurses provide care to patients. And I encourage other nurses to consider this path.”