How to deliver bad news 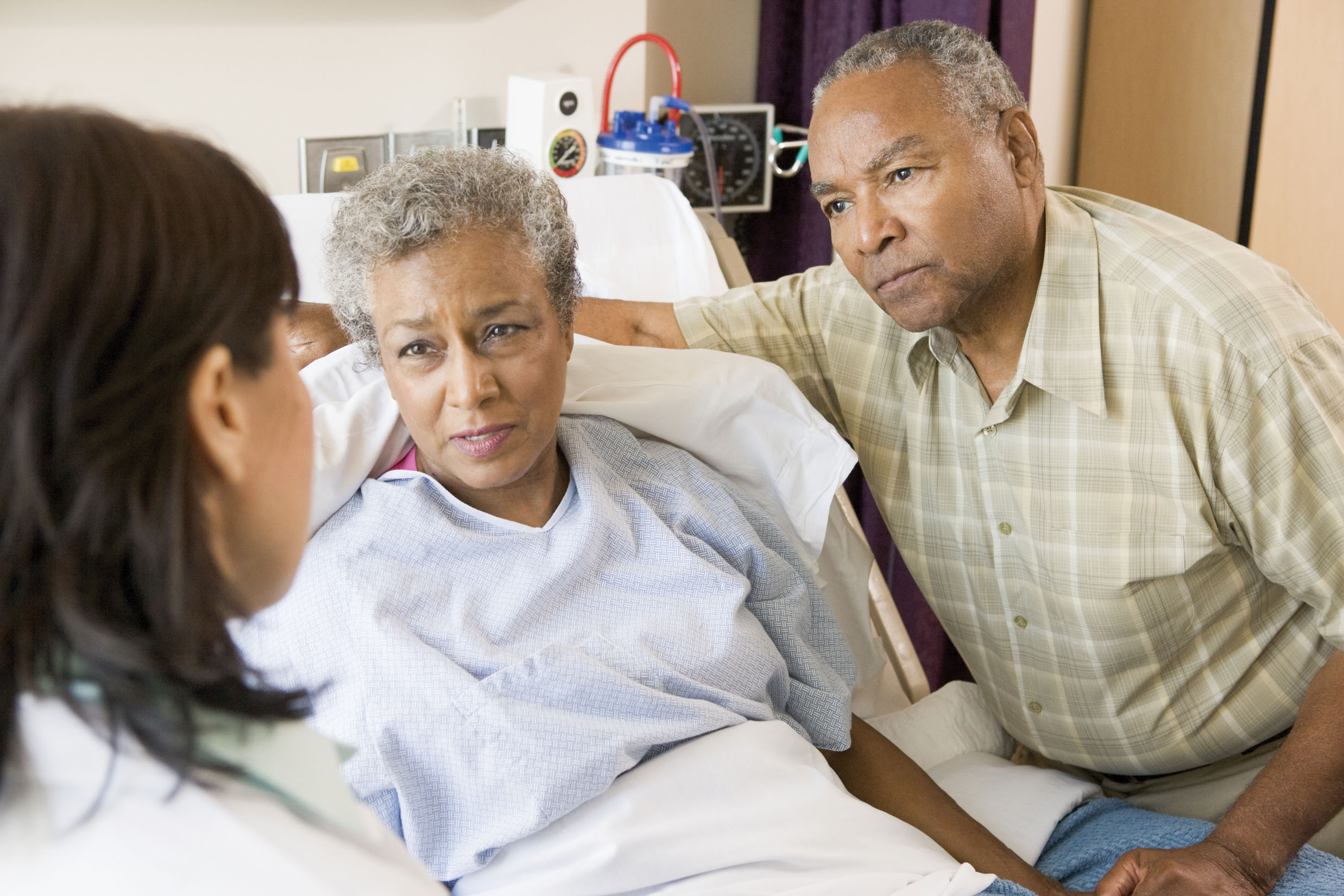 Dad was almost 90 years old, nearly blind, hard-of-hearing, and suffering severe short-term memory loss. Yet despite his ailments, he was always upbeat and cheerful during the 6 years he’d lived with us.

One day, he had a routine doctor’s appointment scheduled. By appointment time, he’d turned yellow. I knew this odd change meant something pretty serious.

I was right. The doctor took one look at the 130-pound canary seated before him and asked me with alarm, “How long has he been this color?” As he thumped and probed Dad’s body, he said, “This color change could be as simple as a gallstone, but at his age it’s more likely we’re dealing with something far more serious.”

The next Monday, we took Dad to the emergency room, where he underwent a computed tomography scan of his gallbladder. After waiting 2 hours for the results, we found out what was wrong.

When the radiologist walked in, I could tell from the look on his face that he was about to deliver bad news. Frankly, I was glad his facial expression foreshadowed what he was about to say. “There’s a growth in your father’s gallbladder region.”

“What exactly does that mean?” I asked. He replied, “We’ll know more after the specialists take a look. His heartbeat is irregular, too, so we’re going to admit him to the hospital to stabilize that. Tomorrow, the hospitalist will meet with you and give you a more complete explanation.” And with that, the pleasant young man left.

The next day, the hospitalist spent the first 5 minutes explaining her role. Then she asked if I had any questions. We still hadn’t been told what was wrong with Dad or what we could expect, so I asked her. Referring to the growth, she said that because of Dad’s age and health status, there was no need for a biopsy and they wouldn’t perform surgery. They would stabilize him, put him into long-term care, and let the problem “take its course.” Because he was expected to die within 30 days, she added, he would qualify for hospice care.

Hospice care? Expected to die within a month? Not one of the other doctors I’d seen over the past few days had stated that.

She was right, though. Dad died 30 days later under the kind care of hospice professionals. When discussing the cause of death, the physician finally used the “c” word—cancer of the gallbladder. This was the first time anyone had used it. Actually, he didn’t even say it aloud. He wrote it.

Throughout the ordeal, everyone had been pleasant. Whatever training they’d had on dealing with terminal patients or giving bad news to family members, the directive to be pleasant had stuck. The unspoken instruction seemed clear: Move on quickly (to keep costs down), say little, and don’t make promises or even a prognosis (thus avoiding legal problems). Plus, don’t upset the patient or family; it might worsen the patient’s medical condition.

For the past 30 years, I’ve studied interpersonal communications within corporations. But this was my first experience with the healthcare industry’s own brand of silence. Research confirms that in any type of organization, when people are faced with high-stakes, potentially emotional conversations, they clam up rather than speak up. Silence rules.

In healthcare settings, where bad news frequently needs to be delivered, the option of saying little can be tempting. Most healthcare specialists haven’t been trained to give bad news or deal with the strong emotional responses that follow. They figure it’s better to minimize communication and hope somebody else will tell the patient and family the whole story—and face their painful emotional reactions.

To get a feel for what healthcare professionals are told about delivering bad news, I read several articles on the topic. They all recommended following a laundry list of steps. Some authors had 22 steps; others, as many as 44. Each list started with advanced preparation to arrange the right setting and people. Unfortunately, my experience with my father allowed for little of this; the results came at us fast.

Next, they’re told to create the right therapeutic relationship by determining how much the patient wants to know. Then they’re to find out what the patient already knows. Each step calls for delays.

But I didn’t want delays. Here’s what I wanted someone to tell my father and me: “My name is Dr. Jones. I’m a radiologist. I have the results of your CT scan. I’m sorry to say you have a large mass growing around your gallbladder. It’s cancer. While we can’t be certain of the prognosis, we know it probably isn’t good. The hospitalist will talk to you later, but it’s the kind of cancer that can’t be removed under the circumstances and will probably run its course in a matter of a few weeks.”

Instead of this candid report, we got information in dribs and drabs from four different people over several days. No one directly stated the facts of his case, and no one stopped to find out how we were feeling. Such avoidance may have been convenient and time-saving for staff members, but it made the situation harder for us.

Delivering bad news is difficult—so difficult that it takes finely tuned skills, coaching, and practice to do it candidly and respectfully. Be prepared to adapt your communication approach to the needs of those involved. Even then, it’s something that will never be easy.

Although there’s much you need to do before and after delivering a bad diagnosis, giving that particular bit of news is the moment you must manage most carefully, as it will make or break the patient’s overall care experience and perception of your facility. Here are the steps to follow when sharing bad news.

Step up to your role

Ask yourself, “What information will I deliver? Am I going to state both the diagnosis and the prognosis?” If so, step up to the challenge. Clearly state the medical facts, avoiding jargon. Then discuss the prognosis without sugarcoating it or passing the buck to someone else. If you know the statistics on the chance of recovery, share these; in that chance lies hope.

Make it safe for the patient and family to react, even to grieve. Honesty is the best policy. If you find it extremely difficult to be honest or are tempted to pass the buck, ask yourself, “Am I more concerned with my reputation or with helping a grieving family?” Consider the consequences of not sharing the information honestly.

When the patient and family express their feelings, acknowledge their pain and express your honest concern so they understand your intent. This will help them absorb your message. Don’t tell them that over the long run, everything will be fine; if applicable, you may want to say this eventually, but these shouldn’t be the first words out of your mouth.

During difficult times, people feel a strong need to be heard and to know you care about them. Make it clear you’re listening to their concerns. Don’t jump in to give quick answers or correct any false statements. Instead, reflect what they’ve said by paraphrasing it in your own words. This tells them you understand their specific concerns.

When people hear frightening news, adrenaline floods their bloodstream and they respond with strong emotions and weak thinking. Adrenaline takes a while to dissipate, so don’t move to a careful explanation of the facts or a discussion of the future until the other person is in the right emotional state to participate.

Delivering bad news is a skill you need to practice. So practice with a colleague or friend. Ask for feedback. Work on your word choices and tone of voice. Develop scripts that are professional, clear, jargon-free, concise, and delivered with compassion. Get in touch with your own emotions. If you believe you’re avoiding a necessary conversation, ask yourself, “What do my actions say about how I really feel?”

I’m thankful to all the caring peoaple who worked with us during my father’s final ordeal. They were concerned, pleasant, and amiable. I just wish they’d found a way to be forthcoming. When bad news should be shared, silence can be harsh. To quote Samuel Butler, “It is tact that is golden, not silence.”

Kerry Patterson has coauthored three bestselling books—The Power to Change Anything, Crucial Conversations: Tools for Talking When Stakes are High, and Crucial Confrontations: Tools for Resolving Broken Promises, Violated Expectations, and Bad Behavior. A speaker and consultant, he is a cofounder of VitalSmarts, a company that provides corporate training to improve organizational performance. Holly Harmon has worked as a CNA, LPN, and RN. Currently, she is the Director of Nursing at Cove’s Edge Long-Term Care and Rehabilitation in Damariscotta, Maine.