The importance of advocacy: Your voice matters 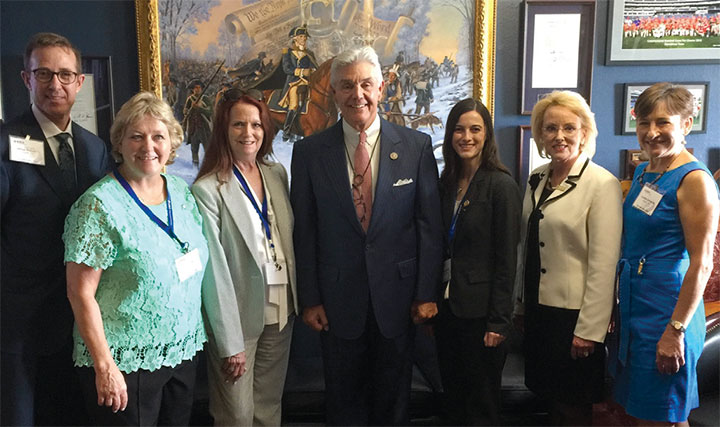 Reflections from a day on the hill.

On June 21, 2018, 277 nurses from 45 states unified their voices into one and “took the hill.” I was one of them. Ten of us practicing in Texas plus one student nurse formed the Texas Nurses Association delegation. We visited the offices of two senators and five congressmen in a span of just 5 hours. It was both exhausting and exhilarating.

The event, called American Nurses Association (ANA) Hill Day, creates a unique opportunity for nurses and future nurses to speak up to influence key legislation on the table and to advocate for health-related policies of interest to nurses. Patient care has been shaped for decades through nurses’ voices, successfully promoting better care for all. Yet with all the controversy and chaos in Washington these days, I wonder whose voice is being heard now. Opinions and opinion-based answers too often eclipse evidence-based ones.

I chose to participate in Hill Day not because I wanted to debate hot issues, but because those of us on the front lines know that some points need emphasizing, some truths need to be defended, and many incorrect viewpoints need to be corrected (and believe me, there are many to correct, especially views related to nurse practitioner prescriptive authority and scope of practice).

Four issues were on the agenda when we met with each lawmaker or staff member:

At first look, these issues seem like no-brainers. Who doesn’t want meaningful solutions to the opioid epidemic, poor staffing, an inadequate nursing supply, and the gun crisis? Little did I realize that these are subjects critics love to debate and create controversy around. Their words may capture headlines but too often are inaccurate.

We were part of the conversations that will help guide the path to our future, the path to expanded care access, top of license practice, and a workplace free from harm. I loathe fads and behaviors—such as disparaging social media postings about employers and co-workers—that undermine the profession, but I’m comforted by the united voice that ANA brings to the Capital scene and the respect that many in Congress have for nurses.

An example is Congressman Roger Williams (R-TX 25th district), who welcomed us with a big smile and open arms. You might remember that he and his legislative assistant Zack Barth were two of those injured in 2017 during a Congressional baseball practice. He spoke vividly about his care experience and his respect for nurses. He brought us to tears as he told us he was leaving the next day for Weatherford, Texas, to present a flag that had flown over the U.S. Capitol to the nurses who took care of him.

As I climbed back onto the bus after the long day, I reflected on what a great experience it had been, personally and professionally. I hope you consider a trip to talk to your legislators. You don’t have to go all the way to Washington. You can visit your state or local policy leaders; just contact your state nurses’ association for help planning your visit. Believe me, your voice matters.

Pandemics and ‘One Health’

The intertwining of nature, wildlife, and humans increases the risk of disease spread.  With the world’s attention gripped by vaccinating the population against COVID-19, infectious...
Read more
ANA Insights Mega Menu

The pandemic and early career nurses

Find support, shape the profession via input, action. During the peaks and valleys of the now 15-month COVID-19 pandemic, nurses remain the bedrock of competent...
Read more
Current Journal

These past 15 months brought nurses’ exceptionalism to the forefront of the nation’s collective conscience—not just the qualities of compassion, dedication, and self-sacrifice, but...
Read more