As this nurse leader explains, communicating with compassion is always the best option.

“Be kind whenever possible, and it is always possible.” 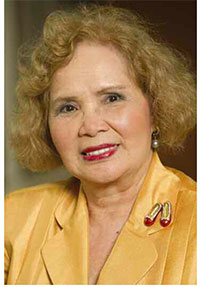 For Rose Constantino, PhD, JD, RN, FAAN, FACFE, the 2016 recipient of ANA’s Jessie M. Scott Award, these words from the Dalai Lama are the ones she lives and leads by in her work as a teacher, researcher, advocate, and mentor.

This approach has served Constantino well in her interactions with students and colleagues in three countries. As an associate professor at the University of Pittsburgh’s School of Nursing for more than 45 years, Constantino teaches undergraduate and graduate courses. In addition, she teaches PhD courses at both Cebu Doctors’ University in the Philippines and the University of Jordan in Amman, the latter in conjunction with her 2016-2017 Fulbright Scholarship.

Given the breadth of her experiences as a teacher, advocate, and researcher, it’s fitting that the Jessie M. Scott award recognized Constantino, a Pennsylvania State Nurses Association member, for her commitment to developing interdependent relationships in nursing education, practice, and research. According to her, establishing these relationships has required both empathy and a willingness to step outside her comfort zone.

What are the most important characteristics of a good leader?

As I’ve made observations about people while working in the United States, the Philippines, and Jordan, I’ve learned that the two most important characteristics of a good leader are cultural humility and emotional intelligence. You’re not superior just because you come from a country with more resources than other countries. The ability to put yourself in someone else’s shoes and understand how that person feels is very important. It’s easy to dislike others who don’t like you or who show disrespect towards you, but if you respond to them with kindness, you’ll avoid unnecessary disagreements.

How did you feel initially about serving as mentor for Sigma Theta Tau International’s Gerontological Nursing Leadership Academy (GNLA)?

At first I thought “I’m the wrong person.” In addition to being a registered nurse, I’m a practicing lawyer and forensic examiner, but I knew very little about gerontology. One of the program’s managers encouraged me to move forward, and I’m glad I did, or I would have missed out on a mind-expanding experience. Now I view mentoring as an experience rather than as a skill. If you’re thinking of mentorship, you’ll be surprised at the experiences that you have to offer and how you’ll harness them in the mentoring relationship.

What leadership philosophy has influenced you the most?

My current view of leadership is drawn from The Leadership Challenge: How to Make Extraordinary Things Happen in Organizations by James M. Kouzes and Barry Z. Posner, which is required reading for all GNLA participants. Kouzes and Posner focus on the leadership challenge of taking people and organizations to places they’ve never been before.

In my case, I approached mentorship of GNLA’s only international fellow, Dr. Pearl Cuevas, as a way to experience transformational leadership with her. My goal as a mentor was to take her from the ordinary to the extraordinary by modeling the way, inspiring a shared vision, and enabling her to act, which represents three of the five practices of exemplary leadership that serve as the foundation for Kouzes and Posner’s work.

Of what accomplishment are you most proud?

Receiving the Jessie M. Scott Award from ANA inspired me and moved me to give more of my time, resources, and talent. Initially I was a little overwhelmed to receive the Jessie M. Scott award, the Fullbright Scholarship, and the GNLA mentorship at one time, but I’m proud of being able to complete the Fulbright Scholarship and am on the way to completing the GNLA, which will culminate November 2017 at the honor society’s Biennial Convention in Indianapolis. Being viewed as someone who can contribute to the field of nursing means a lot to me.

How shall we mourn our dead?