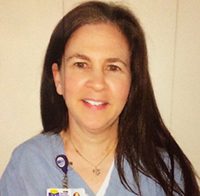 Life after a lung transplant: A second chance to breathe

Have you ever wondered about a patient’s quality of life after receiving an organ transplant? We’ve all heard about the success of kidney transplants, but what do you know about lung transplants? Before I started working in the bronchoscopy unit, I didn’t know anything about these patients. I had never met or cared for a patient who had received a lung transplant in my 20 years as an ICU nurse. Based on my experience in the bronchoscopy unit, I’m able to share my perception of these patients’ quality of life after receiving a transplant.

Part of the postoperative care these patients receive, whether it’s a single or double lung transplant, is a bronchoscopy a few days before being discharged. This initial bronchoscopy is for surveillance purposes—to make sure there are no signs of rejection and to clean out any sloughed tissue at the anastomosis site. Patients usually have six to seven bronchoscopies at various times during their first year after transplant to make sure they don’t have any infections or any signs of rejection. I administered the sedation for their bronchoscopies, so I was able to follow these patients throughout their first year. I was always amazed at how well all patients were doing. Being able to see their progress is what I loved most about my job.

For instance, Mr. K. told me that before his transplantation he had never hugged his two granddaughters and had only been able to hug his wife briefly on rare occasions. He explained that he was so short of breath on his oxygen that he couldn’t have someone get very close to him or he would feel like he was suffocating. He said now he has his life back. He went on to tell me how his granddaughters ran to hug him when they knew it was okay. He says now he hugs his family often and went on to say he would never have believed he could feel this great and not need oxygen anymore. Mr. K. is in his 50s but I have heard similar stories from patients in their 20s to 30s.

Mr. B. is in his early 30s and had cystic fibrosis. He told me he was so dependent on oxygen that he had to be wheeled into the shower and by the time he had gotten up and sat in the chair in the shower, he was so short of breath that he didn’t have the energy to bathe himself. He said now he walks around the block every day and feels he has been given his life back.

Mr. S. told me he was on 10 liters of oxygen before his transplant. He couldn’t even walk 10 feet without being severely short of breath and his pulse oximeter dropping into the low 80s. He said now he feels great and exercises daily. He told me that he and his wife had wanted to go to England to visit friends and family, but were always too afraid before the transplant because he was so short of breath and required so much oxygen. He said they had recently returned from their trip to England and he was so proud because he was able to walk around and see the sites and even carry his wife’s luggage for her.

There are so many stories from all these patients about how even the simplest activity, such as walking a few steps, left them severely short of breath despite the large amounts of oxygen they were on. They now enjoy exercising and doing things they never thought would be possible again. They are all so thankful that they usually write a letter to the donor’s family to thank them.

You may be wondering what kinds of patients receive lung transplants. Although some of these patients may have developed lung disease from smoking, most have cystic fibrosis, alpha 1-antitrypsin deficiency, or idiopathic pulmonary fibrosis. These patients are usually between 18 and 70 years of age.

Many of the patients are healthy other than requiring a lung transplant, while others have minor health issues. If you didn’t know their history, you would never guess they had received a lung transplant. I have met patients who are 6 to 7 years post-transplant and still doing great. It still amazes me when I see the 100% improvement these patients experience. Of course some patients may require additional surgeries for other health issues, but they seem to overcome whatever complications they experience to enjoy a much better quality of life after transplant.

I feel lucky to have worked in a job where I was able to see patients shortly after their lung transplant and then several more times throughout their first year post transplant. I had worked in ICU for 18 years, with 8 years being in the burn unit. Rarely did our patients come back to visit after they were discharged. I have often thought about my previous patients and wondered how they were doing.

I feel that I was fortunate to be able to see the progress these patients made after their transplant. I always encouraged the patients to stop by the ICU and the transplant floor so the nurses who cared for them could see how well they were doing. As nurses, we all work very hard and it’s nice to see the results of our hard work. I have seen how organ donation can change a person’s life and their families’ life so dramatically.

I hope more people will choose to be organ donors because it’s not often that we can make such an impact on someone’s life.

Lisa Miller is a clinical nurse at Tampa General Hospital in Florida.