Why you need your own malpractice insurance

This article debunks these myths, discusses the benefits of having your own liability insurance policy, describes the types of policies available, and explains policy benefits, exclusions, and limits.

MYTH: Only physicians get sued for malpractice.
Although physicians get sued more often than nurses, that trend has shifted lately. Healthcare organizations increasingly are recognizing the individual contributions of all team members, not just physicians. With that recognition comes individual accountability on the part of nurses, including the possibility of being sued for malpractice based on their own acts and omissions.

MYTH: If you have your own insurance, you’re more likely to get sued.
Sometimes a plaintiff’s attorney names multiple defendants in a lawsuit in an attempt to access additional sets of insurance limits and increase the chance for a higher settlement. But that doesn’t mean having insurance increases your chance of getting sued, because insurance status isn’t public information. Whether a defendant has insurance can be discovered only after a lawsuit is filed. The likelihood of the plaintiff dismissing you after learning you don’t have insurance depends on various factors, such as the significance of your role in the incident and whether you have assets to satisfy a potential judgment (such as savings, a home, or a vacation property).

MYTH: You can be sued only if you make a mistake.
You can be sued if someone believes you’re responsible for a certain patient outcome, even if that belief is incorrect. Also, you can be sued by a patient who hasn’t suffered damages but hopes to win a settlement, even though the lawsuit is frivolous. Regardless of whether a lawsuit has merit, you’ll incur expenses as you attempt to get dismissed from the suit. An individual malpractice insurance policy provides peace of mind and protects against the financial ruin that can result from being sued.

MYTH: You don’t need your own insurance because your employer’s policy covers you.
Most nurses who rely on employer coverage alone have never seen the policy or asked about the scope of coverage. They’re often surprised to learn such insurance has gaps and doesn’t adequately cover all of their risks. For instance, if the incident that led to a lawsuit is outside the scope of your job description or falls within a policy exclusion, your employer may refuse to defend you. If the claim is filed after you resigned or were terminated, the employer’s policy may not cover you.

Also, your employer’s policy protects you only when you’re at work. If you provide nursing services outside of your job, even if it’s as a volunteer or a favor to your neighbor, you need to have an individual policy to be covered. Good Samaritan laws protect you only in emergency situations.

When you have your own malpractice insurance, the company provides an attorney to represent your specific interests. Some policies even allow you to choose your own attorney. When you’re covered by both your own and your employer’s policies, the two insurance companies coordinate representation, benefits, and allocation of claim costs and any indemnity or settlement payments. 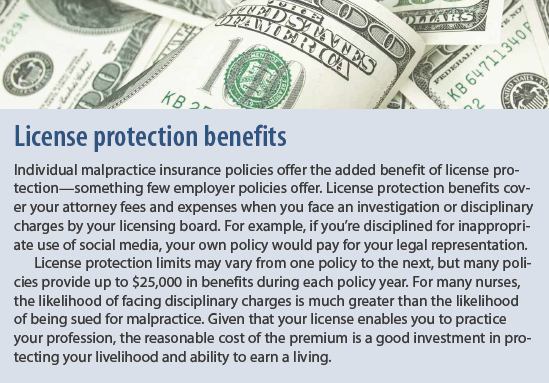 In addition, most companies that provide individual policies offer risk-management services, including continuing education credits, information about claim trends, assessment forms, newsletters, and other valuable tools. You can compare those services and obtain quotes for coverage online from a variety of companies.

Each professional liability insurance policy limits the liability it covers. For example, many policies cover up to $1 million in liability for each claim and up to $6 million total (called in the aggregate) for all claims reported during a given policy period. With an individual policy, those limits are available to cover your liability. (In contrast, with an employer policy, all named defendants commonly share the liability limits.)

Professional liability insurance comes in two types—occurrence based and claims based.

Nursing malpractice insurance commonly is occurrence based. You need to understand which type of policy you have, especially when you change from one company to another. If you’ve been covered by an occurrence-based policy and switch to a claims-made policy, no gap in coverage occurs. But if you switch from a claims-based policy to an occurrence-based policy, you won’t be covered for incidents that occurred but weren’t reported when the claims-based policy was in force. To cover risks asso­ciated with that gap per­i­-od, you must buy (from
either the former or new company) what’s called tail or prior-acts coverage.

Some argue that nurses and other healthcare professionals also should be required by law to carry their own malpractice insurance. Where personal assets are insufficient to cover damages, insurance becomes necessary. Also, nurses should be accountable and responsible for their own practice.

If you don’t already have your own malpractice insurance, I hope this article has convinced you to take action. Usually, the annual premium for a registered nurse or a licensed practical nurse is less than $100—a small price to pay for peace of mind. Coverage for advanced practice registered nurses varies according to the risks associated with the subspecialty and setting. O

Katherine J. Pohlman is a nurse attorney, consultant, and holistic coach in Minneapolis, Minnesota. You may reach her at www.katherinejpohlman.com.