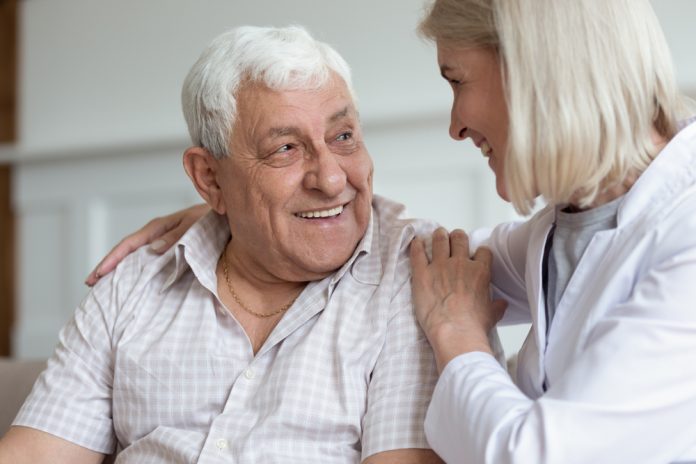 Trained as a licensed practical nurse in 1948, after being a nurse’s aide in Rochester, New York during World War II, Rita Hirschler has cared for the sick and dying throughout much of her century-long life. She has provided end-of-life care for multiple family members, including her mother, two husbands, a daughter, my mother, and many patients. I might not be alive to write this story had my grandmother not been by my bedside 33 years earlier in the hospital’s intensive care unit and noticed I was bleeding internally.

On January 8, 2018, Rita turned 101. She has spent the last 840 days in this nursing home, enduring a tiny, shared space separated by a thin curtain and the maddening blare of strangers’ television selections. When I visited her two days before Christmas 2017, I asked her how she was doing. A single tear formed, desperate, as if tortured, her voice quivered, “I can’t sleep!” Meanwhile, her roommate screamed gibberish. The woman’s daughter, cognizant of the disturbance, reassured my cousin, “She won’t be here long.” Making light of the mortal implication, my cousin quipped, “They’ll do a Dateline special on my grandmother soon—this will be her third roommate in the past year.” The woman died Christmas day.

As chair of the department of health and physical education at Monmouth University within the Marjorie K. Unterberg School of Nursing and Health Studies, I enjoy working in a vibrant environment where we prepare the next generation for personal and professional success. Living on the beach 2 miles from campus is a nice mood elevator as well. So, the few times each year that I drive the 6 hours to see my grandmother, I’m especially sensitive to the contrast in how I feel in the nursing home. Despite brief visits and what I consider to be a relatively deep reserve of emotional well-being, when I sign out, it’s a struggle to remain positive. Smiles belie the pain and loss. How can she take it? How can anyone? Does grandma have unique insights as a resident after spending decades on the other side of the care equation?

At 97 years of age, Grandma was still stubbornly climbing the cellar stairs to launder clothes, reassuring, “I take my time. I say a Hail Mary on the way down and an Our Father on the way up.” Towards the end of her 98th year she continued to cook, clean, and grocery shop. However, her life was about to change.

My dad called me at work to inform me that grandma was minutes from getting an angiogram. I questioned why. Of course, they will find something; she’s nearly 99. I resisted the urge to demand a delay. I reasoned, she’s under a doctor’s care—who am I to question this decision? It’s unlikely my request would have been honored, but everyone needs an advocate.

During the exam she went into cardiac arrest, and her heart was shocked back to life. Days later she was given a choice: Get a pacemaker or die.

After a brief stint in a rehab facility, Gram was back to enjoying the comforts of home, the energy of grandchildren, Sunday dinners with my dad, and a neighbor who would bring homegrown tomatoes. With the aid of electrical impulses keeping her heart’s rhythm, my grandmother joked about the intentions of her 80-year old neighbor and pondered whether she should have chosen life. A few weeks later, after pressure from the doctor who ordered the test, the office of the aging, and family members who felt the time had come, grandma was placed in a nursing home. Although she had experience with short stays, this was to be permanent.

Having failed to protect her against what I believed to be an unnecessary exam, I protested vociferously against the nursing home solution. Grandma had earned the right to die at home. At 99, her life expectancy was just 2 ½ years. Surely our family could help fund her final days. Wouldn’t selling her belongings be devastating?

But practical matters prevailed. If visiting nursing care ate up what little remained of her liquid assets her options would dwindle, and she might not be able to get into this relatively nice nursing home. It wasn’t like my grandma to go without a fight, but the cardiac event had taken a toll. “What are you going to do? Your hands are tied,” she said. “What I should have done is gone to the canal and dumped myself over.”

One month after entering the nursing home, nearly every one of grandma’s possessions had been sold. A century’s worth of life—a couch that 50-year old grandchildren slept like babes on, plates my grandfather last used 30 years ago, and the sights, sounds, and smells that were irreducibly grandma’s home—was liquidated, as sure as hope.

A couple of months passed before I could bring myself to call. “Grandma, it’s Chris.” Seemingly waiting for this moment, Gram blurted, “Did you see what my family did to me?” I explained, but Gram argued, “Best interest? This isn’t in my best interest! If I was home I could have prepared a proper breakfast.” Months later, Grandma was still dissatisfied. She went on to describe an exchange with a dining room staff member. Grandma said, “I’d like a cup of hot coffee, please.” The staff member replied, “I just gave you a cup of coffee.” Grandma lamented, “You drink it cold or you go without.”

Had her professional nursing home experience prepared her to be a resident? Grandma said, “It helped me, but it also made me very upset because there’s a lot of things here that should be changed, I’ll tell you that much.” Although “sometimes you get a nice aide and they come as soon as the button goes off outside your door”, she often waits 20 minutes or more. “I’m afraid of falling even though I’m hanging on to something. Like this morning, I knew I had to go to the foot doctor. So, I rang my buzzer for an aide to come and help me get up, and I was tired and my shoulder hurt, but no one came. So, I get up. If I fall, I fall. I don’t give a damn!”

Still, I observed that she seemed to be making the most of it—making friends, playing bingo, and being involved. “What choice do I have?” she replied.

Our conversation turned to nursing. “I never stopped working. If someone needed a nurse, I would go and take care of them. I always kept my license up.”

On her approach to patient care, she said, “I was always good to people. If I had to go out of my way to help them, I would do it. It didn’t cost me any money to be kind and gentle and say a kind word, or say ‘you’re going to feel better tomorrow’ or ‘I’ll say a prayer for you tonight; you say one for me’, and their face would light up.”

Nurses “always have to look for something to do” and empathize with patients. It’s something she still practices. Recently, she asked a fellow resident, “Why are you so nasty?” “Well, they treat me nasty,” the resident said. So, Gram spoke with the two caregivers and learned they were treating the resident that way “because she doesn’t like us.” She urged them to imagine the woman’s plight and secured a meeting at the end of their shift. “We met out in the dining room. Have I got you any closer to treating people nice like you want to be treated? And she said ‘yes’, and she cried. ‘We want to thank you.’ And I cried too. And I put my arm around them to let them know I appreciated they understood that a patient is a patient. She needs help, she’s in pain, she’s away from home, she doesn’t have any family. How would you like to be in that condition?”

Each year 1.4 million residents find themselves in a similar condition in one of the nearly 16,000 nursing homes located throughout the United States. Even when family members and healthcare professionals have the best intentions, the sad reality is that no one really wants to be in a nursing home.

Just as there are reasons to stay clear of hospitals, such as hospital acquired infections and mistakes, nursing home care carries certain risks that living at home does not. As I type, the nursing home is encouraging visitors to not visit while they attempt to get a flu outbreak under control. In addition to the risk of infectious diseases in an institutional setting, the detrimental impact of the environment on mental health can be life-threatening. Witnessing the ill, infirm, and demented en masse can cause one to be blue. When the bell tolls as often as it does in nursing homes, it is understandable that one might ruminate on when it will toll for them.

Certainly, end-of-life care provided in nursing homes is often necessary, and the people who provide high quality, loving care are to be commended, as are the family members who are doing what they believe is best for their loved one. However, we need to make it easier for people like my grandmother to receive in-home care. Living at home is worth a lot. For many, it’s worth the risk that they might die because of this decision. While there is no guarantee that living in a nursing home will prevent a fall or a host of maladies, the experience of loss and subsequent depression are often predictable eventualities for those relegated to permanent institutional care. Even if a nursing home promised additional quantity of life, is it worth it? For many, like my grandmother, the answer would be no. They want to live and die in their home.