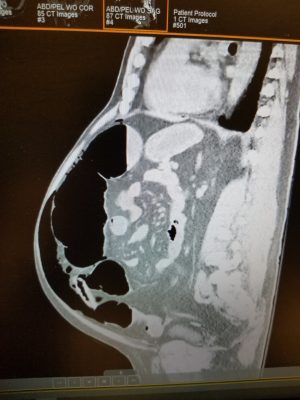 Nearly every day, nurses hear patients complain of bloating, fullness, abdominal tenderness, and constipation. In most cases, these signs and symptoms subside with use of a regimen such as prune juice, warm fluids, stool softeners, oral laxatives, suppositories, enemas, and mobilization.
But in rare cases, they represent a potentially serious condition—acute colonic pseudo-obstruction, or Ogilvie’s syndrome. Unless properly assessed and diagnosed, this condition may lead to large-bowel rupture, which can be fatal.

Definition and cause
Ogilvie’s syndrome is a massive dilation of the colon in the absence of mechanical obstruction, as from an adhesion or a tumor.
The cause of Ogilvie’s syndrome isn’t known. The leading theory holds that lack of GI motility results from overstimulation of the sympathetic nervous system (SNS). One of the two branches of the autonomic nervous system, the SNS boosts blood flow to the heart, brain, and other vital organs; increases the heart rate and blood pressure; reduces GI motility; and inhibits colonic activity.
Normally, stimulation of the parasympathetic nervous system (PNS, the other branch of the autonomic nervous system) decreases the heart rate and blood pressure while increasing GI motility and colonic contraction and relaxing the anal sphincter. Generally, the SNS and PNS work in harmony to maintain adequate GI function. Some researchers believe that in Ogilvie’s syndrome, the PNS is suppressed, leaving the SNS overstimulated. Unopposed, excessive SNS stimulation causes colonic inactivity, which in turn leads to fluid and gas build-up and massive dilation. These consequences increase the risk of bowel perforation, which has a mortality exceeding 50%.
Other theories about the cause of Ogilvie’s syndrome include multisystem organ failure, cecal volvulus, and immobility.

Risk factors
Risk factors for Ogilvie’s syndrome include a wide range of conditions and use of certain drugs.

Assessment
Common signs and symptoms of Ogilvie’s syndrome include:
• abdominal pain, distention, and tenderness; severe distention may occur over 24 hours to 3 days
• nausea and vomiting
• constipation
• fever.
Some patients complain of a full or swollen belly plus mild abdominal pain. However, unless bowel ischemia or perforation has occurred, severe pain and fever aren’t classic signs of Ogilvie’s. Many patients also report lack of bowel movements or flatus—yet about 40% of patients with confirmed Ogilvie’s syndrome continue to pass stools.
Diagnosis hinges on ruling out other potential causes of signs and symptoms—especially mechanical large-bowel obstruction. Other differential diagnoses include simple constipation, volvulus, paralytic ileus, and ischemic colon.

Bowel sound findings
Because Ogilvie’s syndrome may cause hyperactive, hypoactive, normal, or absent bowel sounds, assessment of bowel sounds may lack diagnostic value. However, large amounts of gas trapped in the colon commonly produce tympanic sounds (hollow, drumlike reverberations) on abdominal percussion. Classically, Ogilvie’s syndrome causes the most significant dilation on the right side of the colon proximal to the splenic flexure, so you may hear more tympanic sounds over the right quadrant than over the left.

Abdominal X-ray findings
Abdominal X-rays are crucial to diagnosis. Typically, plain X-rays show massive dilation of the colon, especially pronounced in the ascending and transverse segments. Cecal diameters greater than 12 cm (4.7″) are clinically significant; in some studies of Ogilvie’s patients, diameters were as large as 25 cm (9.8″) and massive dilation occurred along the entire length of the colon—not just the right side.

Contrast studies
Several types of contrast studies may be useful. Computed tomography scans with contrast may reveal mechanical obstruction or bowel perforation.
Water-soluble contrast enemas help rule out mechanical obstruction. (Note: Barium enemas should not be used in patients with suspected Ogilvie’s syndrome because barium retention may occur or barium may leak into the peritoneal cavity if the colon is perforated. Also, enemas increase colonic pressure, heightening the risk of colonic ischemia and perforation.)

Management
Initially, Ogilvie’s syndrome calls for conservative treatment. If the syndrome is suspected, expect the physician to order a nasogastric (NG) tube attached to suction. Additional conservative management measures include:
• withholding oral intake
• discontinuing opioids (which slow GI motility)
• withholding other drugs that worsen the syndrome
• correcting fluid and electrolyte imbalances—especially hypokalemia, which decreases smooth-muscle contractility and thus slows or even halts GI motility.
Also, a rectal tube may be placed to decompress the distal colon. If such a tube is in place, reposition the patient frequently to promote passage of flatus.

Colonoscopy with decompression
If symptoms persist after 48 to 72 hours of conservative management, a gastroenterologist performs a colonoscopy to reconfirm absence of mechanical obstruction and decompress the colon. This procedure must be performed on an unprepared colon, which poses a challenge. To improve patient outcome, a right-sided colonic decompression tube is placed during colonoscopy to allow gas and fluid to evacuate the area most severely affected by Ogilvie’s syndrome (the cecum to the splenic flexure). Extending the colonoscope beyond the hepatic flexure achieves successful decompression in about 85% of cases.

Drug therapy
Neostigmine is the drug most commonly used for Ogilvie’s syndrome. It allows acetylcholine to build up at the neuromuscular junction. This leads to smooth-muscle contractions, increased peristalsis, colonic sphincter relaxation, and gas expulsion.
Expect to administer neostigmine after the first 24 hours if conservative treatment hasn’t relieved symptoms. The usual dosage is 2 mg I.V. by direct bolus over 3 to 5 minutes, followed by a continuous infusion at a rate of 0.4 mg/hour for 24 hours. Typically, the patient experiences cramping and begins to pass flatus within 10 to 30 minutes after the bolus dose and evacuates stool in about 1 to 2 hours. However, use the drug with caution because of its many adverse effects.

Cecostomy
Despite colonic decompression and neostigmine therapy, severe abdominal distention and abdominal pain may persist in some patients, and X-rays may continue to show a cecal diameter greater than 12 cm with massive colonic dilation. In these cases, cecostomy or other aggressive interventions are needed to decompress the colon and improve patient outcome.
Cecostomy can be performed percutaneously under moderate sedation. Although infrequently used, the procedure may benefit high surgical-risk patients who don’t respond to conservative measures. The physician places a tube into the cecum in a procedure similar to that used for percutaneous endoscopic gastrostomy tube insertion. Once the tube is secured in place, it may be attached to wall suction and used to instill such drugs as polyethylene glycol (Miralax) to promote bowel movements.Surgical intervention
Surgery is reserved for patients with evidence of persistent, severe colonic distention (which increases the risk of colonic ischemia, perforation, and peritonitis) or when other attempts to manage Ogilvie’s syndrome fail. In these patients, exploratory laparotomy with resection of the perforated bowel or partial colectomy may relieve symptoms. Nonetheless, mortality approaches 30% in patients who require surgery.
Some patients may need to undergo colonic resection with reanastomosis (removal and reconnection of a large-bowel portion). If this procedure isn’t feasible at the time of emergency surgery, a colostomy will be performed.

Nursing interventions
When caring for a patient with Ogilvie’s syndrome, follow these guidelines:
• Withhold all oral intake.
• Irrigate the NG tube (if used) with tap water, according to your facility’s protocol, to keep it patent.
• Irrigate the colonic decompression tube as ordered.
• Maintain the ordered amount of suction (usually low-intermittent) to the NG, colonic decompression, or cecostomy tube.
• Reposition the patient frequently.
• Use extreme caution when administering enemas (if ordered); by raising intraluminal pressure, they increase the risk of colonic perforation.
• Avoid giving opioids, which slow GI motility.
• Administer I.V. fluids as ordered to replace volume deficits and correct electrolyte imbalances.
• Assess for acute, increasing abdominal distention and pain, which may indicate colonic ischemia or perforation.
• Stay alert for signs and symptoms of bowel ischemia or perforation, such as tachycardia, hypotension, fever, decreased urine output, and elevated white blood cell count.
• If your patient is receiving neostigmine, stay alert for adverse effects.
These interventions—and your ability to detect suggestive signs and symptoms—can help improve outcomes for patients with Ogilvie’s syndrome.