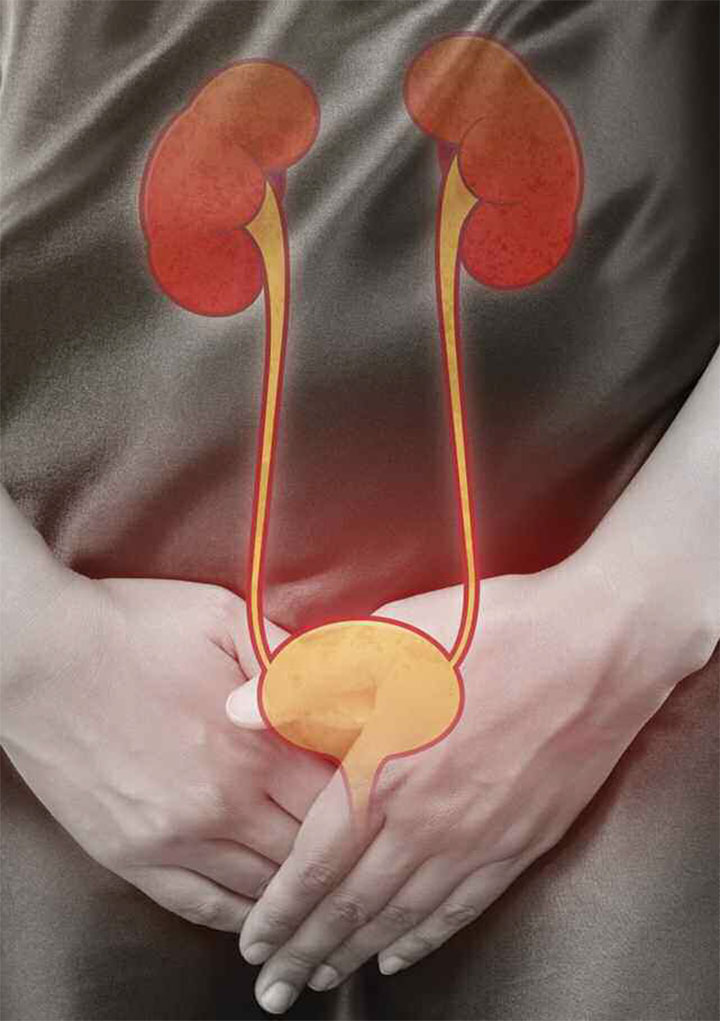 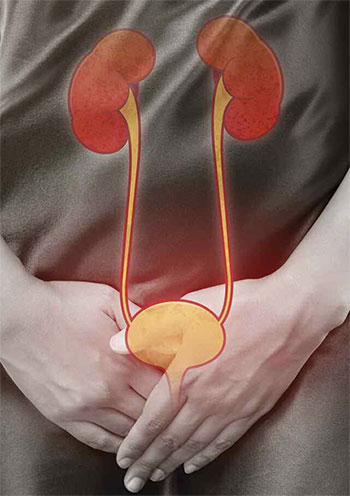 According to the American Congress of Obstetricians and Gynecologists, about 6,000 women in the United States enter menopause every day. During menopause (which is defined as the cessation of menstruation for 12 consecutive months), estrogen levels significantly decrease, resulting in hormonal fluctuations and physiological changes to the genitalia.

About 16% to 18% of postmenopausal women develop UI. Many are too embarrassed to discuss the condition with their healthcare providers and some believe it’s a normal part of aging that they have to live with. The result can be isolation and depression when they limit their activities and social interactions because of UI.

Nurses are key to ensuring patients receive the care they need.
A thorough knowledge of UI and its treatment options allows nurses to answer patients’ questions and make referrals as necessary. In addition, providing a comfortable atmosphere will help patients open up about their symptoms.

SUI is the most common type of UI. Caused by insufficient support of the urethra, it’s characterized by involuntary urine loss associated with coughing, sneezing, or physical activity.

UUI’s primary symptom is urine leakage accompanied by a strong desire to void. Myogenic and neurologic factors (including increased afferent activity, decreased inhibitory control in the central nervous system or peripheral ganglia, and increased sensitivity to efferent stimulation in the detrusor) may contribute to UUI (also called overactive bladder).

Many women have MUI, which includes urinary frequency, urgen­cy, and stress incontinence. To determine which condition the patient has, urodynamic diagnostic testing combined with subjective and objective findings are reviewed. (See Diagnostic gold standard.) 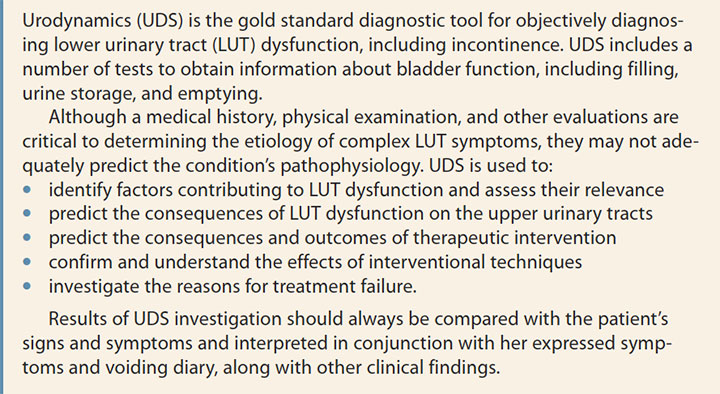 Menopause has been implicated in the etiology of many urogenital complaints, including dysuria, frequency, nocturia, and urgency. The epithelial tissues of the urethra, trigone, bladder, and vaginal walls contain estrogen and pro­gesterone receptors. The reduction in estrogen that occurs as a result of menopause leads to thinning epithelium, weakening tissue, and decreasing blood flow and vaginal wall elasticity.

Thinning epithelium can cause reduced urethral closure, decreased bladder sensation, and recurrent urinary tract infection. Decreased blood flow and reduced vaginal wall elasticity can lead to dyspareunia (pain­ful intercourse), a shortened vagina, and easily traumatized vaginal epithelium that may cause postmeno­pausal bleeding. In addition, loss of cellular glycogen and decreased lactic acid can alter vaginal pH, changing it from acidic (pH 4 to 5) to alkaline (pH 6 to 8), which increases the susceptibility to pathogens.

Other causes of UI in the postmenopausal population include pel­vic organ (bladder, uterus, rectum, or small intestine) prolapse and hysterectomy or any other reproductive system surgery. Also, victims of rape may experience UI resulting from physical and psychological effects of the trauma.

Treatment should begin with a voiding diary (also known as a bladder diary) to record a patient’s urination habits and activities. The diary should reflect:

Management and treatment of UI includes products that make it possible for patients to participate com­fortably in social activities as well as medication, behavior modification, surgery, and alternative therapies.

Incontinence underwear—disposable or washable and reusable—has a waterproof liner and built-in cloth pad to absorb large amounts of urine. Available in daytime and nighttime (designed to hold more urine) styles, the absorbent underwear protects skin from moisture and controls odor.

A product resembling a tampon is made of a wad of absorbent fibers and a collapsible silicone structure with a nonabsorbent polypropylene covering. It helps support the urethra to prevent accidental leaks but doesn’t inhibit urination and won’t move or fall out during bowel movements.

Mechanical devices such as pessaries support the urethra to prevent or reduce urinary leakage. Pes­saries, which come in various sizes and can be used to support vaginal prolapse, are professionally fitted by trained healthcare pro­viders. They should be removed, cleaned, and reinserted regularly to prevent infection. Some of the devices, such as ring pessaries, can be removed and reinserted by the patient. They are similar to a dia­phragm and can be removed or left in place for sexual intercourse. Gellhorn pessaries, on the other hand, can’t be easily removed and they can’t be left in for intercourse. They require professional cleaning and reinsertion at least once every 3 months. If any pessary is left in place for too long, the patient may develop excessive discharge and pressure injuries.

Pelvic floor muscle training strengthens support of the urethra, vagina, and rectum to reduce UI symptoms. It can be delivered with or without assistive devices such as weighted vaginal cones, biofeedback, or electrostimulation. Electrostimulation improves muscle tone and helps stimulate the sensation of the pelvic floor muscles to enhance muscle control. It also reduces the detrusor contraction in women with UUI, which also can be treated with sacral neuromodulation and external electrodes.

Because systemic estrogen, which is effective in treating vaginal atrophy, is no longer recommended, localized estrogen is suggested. Localized estrogen, available as a cream, intravaginal pill, and vaginal ring, has slow-release estradiol, which is associated with fewer adverse effects than systemic estrogen. However, it can cause endometrial stimulation, uterine bleeding, breast tenderness, and other negative effects. Treatment results in rapid symptom relief, with significant improvement after about 2 weeks; the full effect on vaginal atrophy takes up to 6 weeks.

Anticholinergic drugs, the most commonly used drugs to treat UUI, target specific areas of the peripheral nervous system to block the action of acetylcholine. These drugs act on cholinergic receptors in the brain, secretory glands, heart, and smooth muscle (such as the bladder) by occupying receptor sites at parasympathetic nerve endings. In addition to providing an antispasmodic effect on smooth muscle to relieve symptoms, they also decrease urinary frequency and pain during urination associated with infections such as cystitis and urethritis. In addition, anticholinergic agents are given to increase bladder capacity in enuresis, paraplegia, or neurogenic bladder.

Contraindications for anticho­linergic drugs include conditions with symptoms that might be aggravated by the drugs, including myasthenia gravis, hyperthyroidism, glau­coma, tachyarrhythmia, myo­cardial infarction, and heart failure unless bradycardia is present. The medications shouldn’t be given to women with hiatal hernia or other conditions that contribute to reﬂux esophagitis because they may delay gastric emptying, relax the cardio­esophageal sphincter, and increase esophageal reﬂux. 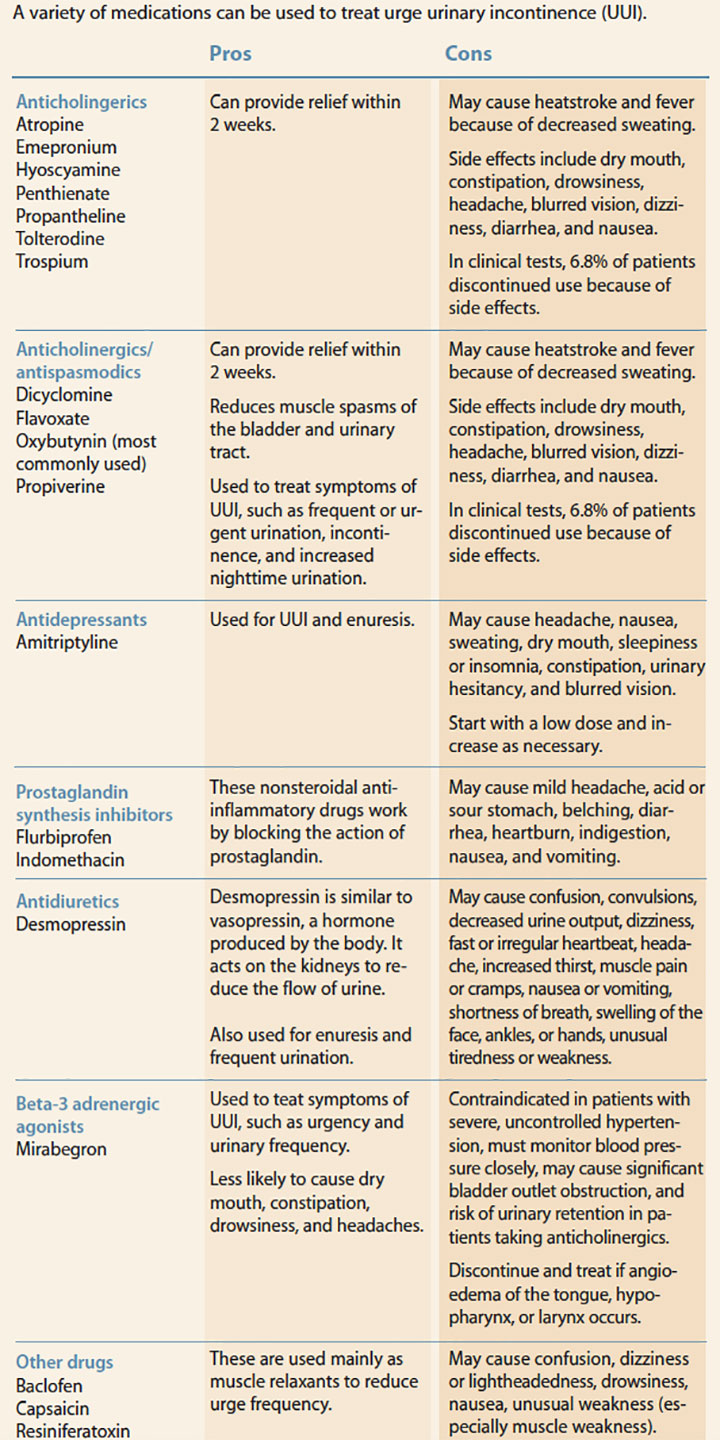 Surgical approaches to lift and support the urethrovesical junction fall into two categories—sling procedures and bladder neck suspensions. Sling procedures (tension-free vaginal tape and transobturator tape) use a strip of synthetic mesh tape to create a sling placed under the urethra or bladder neck (the area of thickened muscle where the bladder connects to the urethra) to provide support and keep the urethra closed to prevent urine leakage under stress from actions such as coughing or sneezing. Sling procedures are mainly used to correct SUI, although they also may ease the symptoms of UUI.

No stitches are needed to attach a tension-free sling. Three small incisions are made to insert the sling—a 1-cm incision on either side of the lower abdomen and a 3-cm incision in the vagina to allow the sling to be placed. Body tissue holds the sling in place and eventually scar tissue forms in and around the sling to keep it from moving.

With the transobturator approach, a small incision is made in the vagina just under the urethra and two small openings are created, one in each groin. Narrow mesh carrier instruments are passed through each opening, and the mesh sling is then attached to each of the instruments. When the instruments are removed, the sling is pulled back through the incisions. After the sling is adjusted under the urethra, excess material is trimmed. Friction of the muscles and other tissues holds the sling in place. The incisions are sealed with skin glue or stiches and the vaginal incision is closed with absorbable stitches.

Recovery time varies, but the recommendation is 2 to 4 weeks before returning to normal activities, including heavy lifting or strenuous exercise, and 6 weeks before resuming sexual activity. Possible complications include erosion of the material, infection, and pain.

In addition to traditional treatment of UI, patients may wish to try alternative therapies.

As a nurse, your approach to patients with UI can help them express their fears, worries, and embarrassment. Let patients know that they’re not alone and that UI isn’t something they have to live with. Provide education about protective products, pelvic floor muscle training exercises, behavior modification, and symptom management. And encourage them to learn more about their condition. (See Education—For you and your patients.)

Education-For you and your patients

Christina Tso is a family nurse practitioner and clinical research professional at Northwell Health, formerly known as North Shore-LIJ Health System, and assistant professor of nursing for Hofstra Northwell School of Graduate Nursing and Physician Assistant Studies. Wah Lee, who is in private practice in New York, New York, holds board certification in physical medicine and rehabilitation and neuromusculoskeletal medicine.