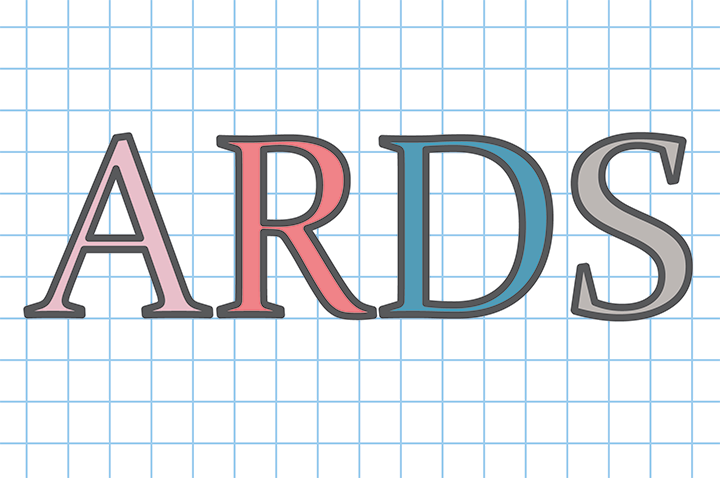 Appropriate use of prone positioning can improve patient outcomes. 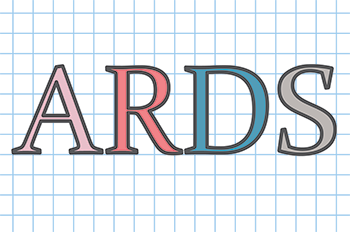 Paul Welsh*, who is 66 years old, is brought to the emergency department (ED) by his family. He’s experiencing increasing fatigue, fever, chills, and a productive cough. He reports that he’s been in relatively good health until about a week ago, when he noted a sore throat and “cold symptoms.” He visited his primary care provider, who prescribed azithromycin. Mr. Welsh, who has type 2 non-insulin dependent diabetes, hasn’t been vaccinated for pneumonia.

Margaret, the ED nurse, notes that Mr. Welsh is dyspneic and mildly confused with disorientation to date and time. She applies oxygen at 2 L via nasal cannula. On physical exam, Margaret notes bilateral wheezing and crackles throughout the lower lobes. Mr. Welsh’s vital signs are temperature 96.8° F (36° C), apical heart rate (HR) 118 beats per minute (bpm) and regular, respiratory rate (RR) 28 breaths per minute with accessory muscle use, oxygen saturation 87%, and blood pressure (BP) 98/60 mmHg (seated). Margaret increases the oxygen to a 40% nonrebreather mask, and the provider writes orders for a stat chest X-ray and blood work for arterial blood gas. The patient is admitted to the telemetry unit for continued evaluation and treatment of progressive community-acquired pneumonia.

The next morning, Sarah, the telemetry unit nurse, observes that Mr. Welsh is more confused and that his blood gases are rapidly deteriorating. He’s transferred to the intensive care unit (ICU) for mechanical ventilation. Mark, Mr. Welsh’s nurse in the ICU, notes that his lab values reveal leukocytosis and respiratory acidosis (pH 7.31, carbon dioxide 48 mEq/L, bicarbonate [HCO3] 24 mEq/L) with hypoxemia and a blood lactate concentration of 5 mmol/L. The fraction of inspired oxygen (FiO2) percentage can’t be reduced from 100% on the ventilator, and the target tidal volume remains set at 6 mL/kg of predicted body weight to protect lung tissue. Mark increases suctioning because of purulent secretions. Aerobic and an aerobic blood cultures are sent to the lab. Positive end-expiratory pressure (PEEP) is added to the mechanical ventilator settings in an attempt to avoid alveolar collapse. Chest radiography reveals bilateral infiltrates and noncardiac pulmonary edema.

After the provider orders vasopressor norepinephrine, titrated to maintain a mean arterial pressure (MAP) of 65 mmHg, Mr. Welsh’s BP and HR stabilize. Inotropic therapy with dobutamine at 20 mcg/kg/min is added because of continued hypoperfusion despite achieving a desired MAP. Mr. Welsh is diagnosed with pneumonia, which has contributed to the development of acute respiratory distress syndrome (ARDS). (See All about ARDS.) 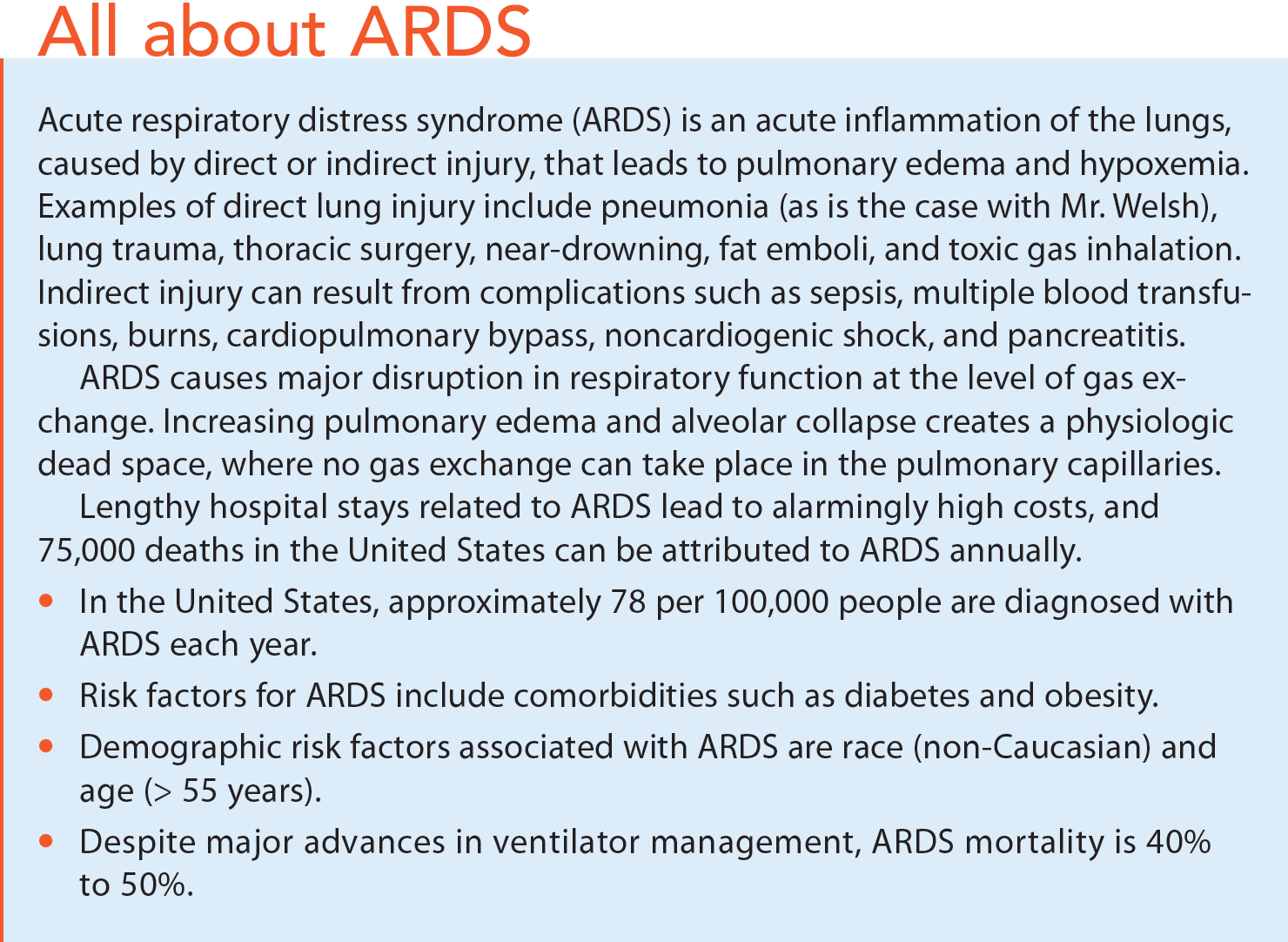 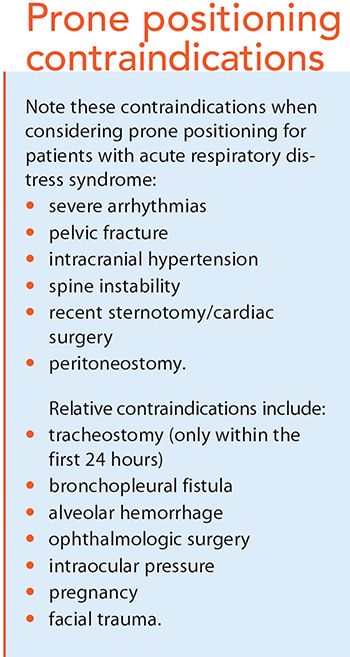 Turning the patient with ARDS from a supine to a prone position can increase pulmonary capillary perfusion and oxygenation. The physiologic changes (fluid shifting from the posterior lung, allowing undamaged alveoli to be filled with oxygenated blood) that occur when turning a patient into a prone position improve ventilation. Prone positioning also promotes pulmonary toileting and alveoli opening, and it has been associated with a decrease in ventilator-induced acute lung injury.

Prone positioning as a therapeutic intervention for ARDS has been studied for decades, with inconclusive results regarding the benefits to patients. However, recent studies have shown that early application of prone positioning for several hours at a time significantly reduces the mortality of mechanically ventilated patients with moderate to severe ARDS.

Patients in the early stages of ARDS who have been mechanically ventilated for fewer than 36 hours are good candidates for prone positioning (typically, prone positioning is recommended within the first 24 hours of an ARDS diagnosis). However, also consider prone positioning when patients have progressed to moderate to severe ARDS and have refractory hypoxemia with partial pressure of arterial oxygen (PaO2)/FiO2 ratio less than 150 mmHg.

Before placing a patient in the prone position, note these contra – indications: increased intracranial pressure, instability of the spine, acute lethal arrhythmias, and postcardiac and ophthalmologic surgeries. (See Prone positioning contraindications.) In addition, patients who are hemodynamically unstable on increasing vasopressors aren’t candidates for prone positioning.

The physical act of turning a ventilated patient to the prone position can be intimidating, even for a well-trained staff. Before any organization implements the prone positioning protocol, the critical care team must be skilled in this technique. Proper education and practice can reduce complications related to position changes, such as accidental extubation or obstruction of the endotracheal tube and dislodgment of I.V. and arterial tubing. Developing an interdisciplinary critical care team (such as a code team) specialized in prone positioning of ARDS patients can minimize mechanical challenges and increase confidence, which may then lead to greater use of the protocol. Some organizations, however, may want to consider using rotating beds to reduce the risks associated with turning and skin breakdown.

To minimize complications of prone positioning, the respositioning team should include an anesthesia provider stationed at the head of the bed to stabilize the endotracheal tube and a minimum of three additional nurses or therapists. Each should have specifically designated responsibilities, such as monitoring vital signs, securing invasive lines, preparing suction equipment, and ensuring proper body alignment to reduce stress on pressure points, joints, and neck. (See Prone positioning protocol.) 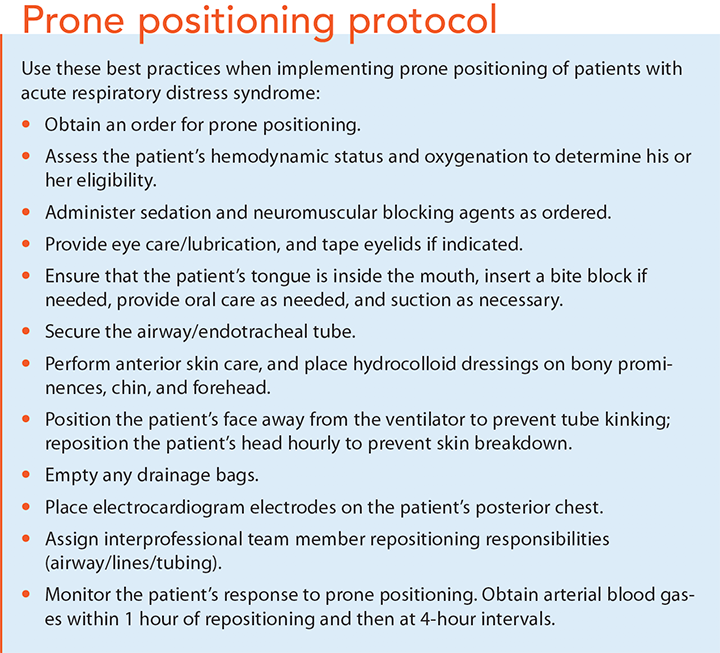 After the team determines that a patient is a candidate for prone positioning, discuss appropriate sedation and the possible addition of neuromuscular blocking agents before repositioning. Best practice suggests maintaining prone positioning for between 17 to 20 consecutive hours per day. Perform an initial arterial blood gas assessment just before turning the patient from supine to prone, 1 hour after placement in the prone position, and then at 4-hour intervals.

Immediately after placing the patient in the prone position, assess him or her for acute complications such as prolonged hypotension, bradycardia, prolonged decrease in pulse oximetry, and cardiac arrest. Complications that require immediate cessation of prone positioning include:

Patients are considered to be tolerating the initial position change when they don’t have any obvious complications and they’re hemodynamically stable, with a partial pressure of oxygen (PO2) > 80 mmHg on arterial blood gas. Once the patient is back in the supine position, watch for indications that the prone position is being well tolerated, such as improved oxygenation for at least 4 hours after the last proning session or a decrease in the PaO2/FiO2 ratio of more than 20% compared to the ratio in the supine position.

Studies have shown that patients in prolonged prone positioning can receive enteral nutrition safely with no differences in gastric residual volumes or vomiting when compared to patients who are mechanically ventilated in the supine position. Strategies to help prevent enteral feeding complications include medications (such as metoclopramide or bromopride) to increase gastric motility and the inverse Trendelenburg position while lying prone. In addition, monitor gastric residual volumes, and check the patient’s oral cavity for food or vomit every 2 hours. Adequate nutrition also helps prevent skin breakdown.

Studies have found that patients in the prone position for extend – ed periods have a higher risk for pressure injuries on the face and the anterior chest wall. To reduce this risk, use hydrocolloid dressings on bony prominences, such as the forehead, chin, and shoulders. And turn and reposition the patient every 2 hours to redistribute pressure and reduce friction. Repositioning the head every hour and providing ocular and eyelid protection can help reduce skin breakdown.

Increasing survival rates for mechanically ventilated patients with ARDS is possible using an evidence-based strategy, such as turning them from supine to the prone position, when it’s accompanied by ongoing education and training of interprofessional teams. Nurses who are adequately skilled in a prone position protocol can confidently care for critically ill patients with ARDS and ultimately improve outcomes.

Because of Mr. Welsh’s refractory hypoxemia and acute respiratory acidosis, he’s identified as a candidate for prone positioning. He is placed in the prone position for 18 consecutive hours for 3 days. On day 4, arterial blood gases stabilize for over 4 hours in the supine position and adjustments of ventilator settings are made to decrease FiO2 and discontinue PEEP. Mark continues to suction copious secretions and monitor Mr. Welsh’s vital signs, including pulse oximetry, which stabilizes at 94%. Mr. Welsh remains hemodynamically stable and is successfully extubated the next morning.