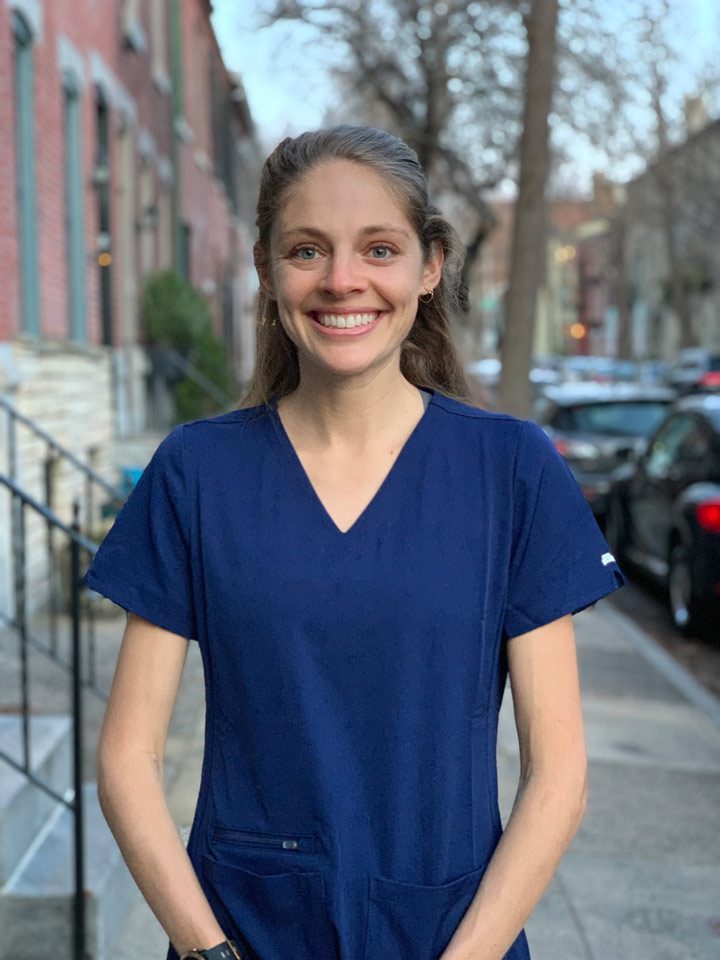 When Samantha Roecker, MSC, BSN, RN, talks about her friend and colleague’s mental health struggles in the wake of the COVID-19 pandemic, she’s quick to clarify that these problems aren’t unique to any one nurse or healthcare provider.

Rather, it was Roecker’s reaction that was unique.

Roecker will be running Monday’s Boston Marathon in recognition of her friend and all healthcare professionals.

A remarkable accomplishment, no doubt, but hardly a stretch for Roecker – an elite runner who has broken the two hour, 30-minute mark in marathon competition and finished Boston twice (in 2015 and 2017.)

But there’s just one twist – Roecker will be running the race in her nurse’s uniform.

The idea came from an all-too-common source of inspiration – frustration.

“Professionals are suffering immensely [in the wake of COVID],” said Roecker. “I wanted to help [her friend], but there really wasn’t much I felt I could do.

“So I started trying to find a way to connect my small platform in the running world.”

Roecker recalled reading a story on the fastest marathon time run by someone in a nurse’s uniform. She figured she’d try to break the record at a small, local race just to give her friend a reason a smile.

“But when I mentioned this to other runners, other healthcare workers, they made me think I needed to make this big,” she said. “That’s when I figured Boston was the place to run.”

Even non-running enthusiasts are familiar with Boston, perhaps the world’s most famous marathon and certainly one of its most crowded with about 30,000 participants annually. For runners both casual and competitive, Boston is a bucket list-type event; a race to complete at least once in their lifetimes. For Samantha Roecker, it’s been a measuring stick as well as a place to set and achieve goals. The 2022 event will serve an entirely different purpose.

“Finishing top 10 at a major marathon is one of my running goals,” she admitted. “But that’s for another day. My goal for Monday is to raise awareness, bring attention to the cause.”

Roecker admits she’s not at her competitive best, having worked through some injuries over the past year. That said, she feels the record time for a marathon in a nurse’s uniform (3 hours, eight minutes, 22 seconds) is well within her reach. But if she doesn’t break the record?

“[The record] was just my motivation to put my silly idea out there,” she explained. “I was a little afraid to show up at the starting line of a major race wearing scrubs, so aiming for the record made it a little easier.

“But now the idea has grown, and the fundraising aspect has been so overwhelming that setting the record would just be a bonus.”

Within the fundraising lies Samantha’s true motivation: providing both funding and awareness for the mental health challenges nurses face every day. Combining her dual passions – nursing and running – she set a goal of raising $26,200 for the cause, in line with the 26.2-mile marathon distance.

This past Monday, Roecker’s “silly idea” officially became much more when she exceeded her fundraising goal. Now closing in on the $30,000 mark, Roecker plans to keep her fundraising page open throughout Nurses Month in May to both continue to raise awareness and bring in as much money for the cause as possible.

Rocker’s elevated status within the running community certainly doesn’t hurt the cause. She finished third in the U.S. championships and qualified for the 2020 U.S. Olympic Trials before injury derailed her efforts.

This year in Boston, she won’t be running with the elite pack, but the race will include many of her good friends who knows all about Sam’s cause. Support has come from both the nursing and running communities.

For years, Samantha Roecker ran with the singular motivation common to many competitive athletes. But for one day, the potential to set a world record of which she was previously unaware will combine with a charitable cause to provide Roecker with an unfamiliar yet equally driving incentive. Because the way she sees it, the faster she runs, the more attention her cause garners.

“If I have to raise my fundraising goal, that’s certainly not the worst thing!” Roecker laughed.