Select all that apply: patient care beyond the test 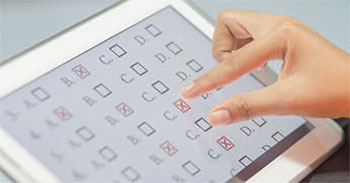 Multiple choice tests are among nursing education’s most recognizable stressors (or stigmata), up there with nursing care plans, and incessant group projects. Some see exams as the enduring barometer of success, while others view them as a barrier for academic equity. In general, testing remains a contentious subject in education given the notion that the grade point average (GPA) is an incomplete predictor of quality patient care post-graduation. In nursing, there is a near-idolatrous emphasis on critical thinking, though the concept remains ill-defined. When a nursing test item asks the ubiquitous question “what should the nurse do next?” It gives the impression that nurses do just one thing at a time. In reality, nurses are the gold medalists of multi-tasking, and by extension, the champions of multiple ways of thinking (the term preferred by the nurse theorist Patricia Benner). Consider this scenario:

A nurse responds to a call light from a patient experiencing diarrhea and abdominal cramps, asking for help to use the bedpan. This request triggers a cascade of thinking through and task calibration by the nurse. Before entering the patient’s room, the nurse grabs a couple of towels, a packet of barrier cream, a patient gown, a specimen cup, a cup of apple juice, 650 mg of acetaminophen, and a pair of saline flushes.

Now, put the above scenario in a nursing test. Can you imagine? Multiple choice questions with one correct answer gives the illusion that there is only one right thing to do in a given scenario.

None of the above

Nurses can attest to the astonishing reality that most of what they do that matters in patient safety and quality were never on the test while in nursing school. Upon entering the workforce, new grads discover soon enough what makes bedside nursing a tough challenge – it gives the test first before the lesson. Sadly, some would learn the right thing to do only after they made their first mistake. In my case, I discovered this when I gave IV phenytoin for the first time (the test). It wasn’t until I saw the crystals in the bag that I found out phenytoin should not be mixed with D5W (the lesson). A nursing exam that focuses merely on theory and recalling information is counterintuitive in a profession that demands so much clinical decision making. According to one observational study, critical care nurses make clinical decisions every 30 seconds. No wonder nursing is exhausting. A nursing test item listing “none of the above” as a potential answer is a glaring anomaly because in nursing there is always something to do.

Not as simple as ABC

Over the years, nursing tests have become so formulaic that test-savvy students can pick out the rights answers even without reading the full question. Airway, breathing, and circulation have become the default ordered correct answers. But, much of what nurses do in a given shift has nothing to do with ABCs or emergencies (hint: most patients in the ED are not in cardiac arrest or bursting an appendix). A major part of the nurse’s workload is humanizing care in healthcare. And that is difficulty to translate into a test item because patients are complex and not as clear cut as the cheat sheets that students cram into their heads. Nurses deal with nuanced clinical scenarios, unlike the two-sentence clinical vignette typically seen in a nursing exam. We tell our students that in answering the National Council Licensure Examination (NCLEX), they should assume that staffing is adequate, supplies are available, all orders have been prescribed, and the interdisciplinary team is at their disposal. This might help pick the right answer in a test, but it does little to boost resiliency competence that is vital if one plans to practice bedside nursing for a while.

Practice outside the check box

Years ago, I gathered a group nursing students at the bedside of a Chinese-speaking, 26-year-old female with developmental delay who was admitted for osteomyelitis. The patient suffered from chronic pain due to a stage IV sacral ulcer. At some point during the bedside discussion (we were reviewing the plan of care), the patient said something to her mother. In a pantomime, I gathered that the patient wanted her mother to tie my hair in a pig tail, similar to what the patient had. I consented. When the patient examined my new coiffure she burst into gales of laughter – an old-fashioned laugh-out-loud. With my top hair tied up with a rubber band sprouting like a black fountain suspended in mid-air, I looked comically exotic. Given that laughter is infectious, everyone in the room was united in giggles for some minutes thereafter.

As a nursing test item, the patient above would have been reduced to the particularities of her vital signs, white blood cell count, and the appearance of the gaping sacral ulcer, followed by “what is your priority action?” When we step outside the bubble of the scantron and practice outside the check box of the curated answer choices, we are able connect with the existential and maybe even boost analgesia through a bolus of laughter.

Testing and grading students will always be part of modern education. The discordance between academic measures of success and patient experience satisfaction can be mitigated by synthesizing the humanities into health professions education and truly listening to patient narratives. It is impossible to distill or dilute a patient’s (hi)story into a multiple choice test question. Sir William Osler was right “It is much more important to know what sort of a patient has a disease than what sort of a disease a patient has.”

Supiano V. Grades Can Hinder Learning. What Should Professors Use Instead? July 19, 2019. Accessed December 4, 2021. https://www.chronicle.com/article/grades-can-hinder-learning-what-should-professors-use-instead/?cid=gen_sign_in

The Relentless School Nurse: Wishing another year away