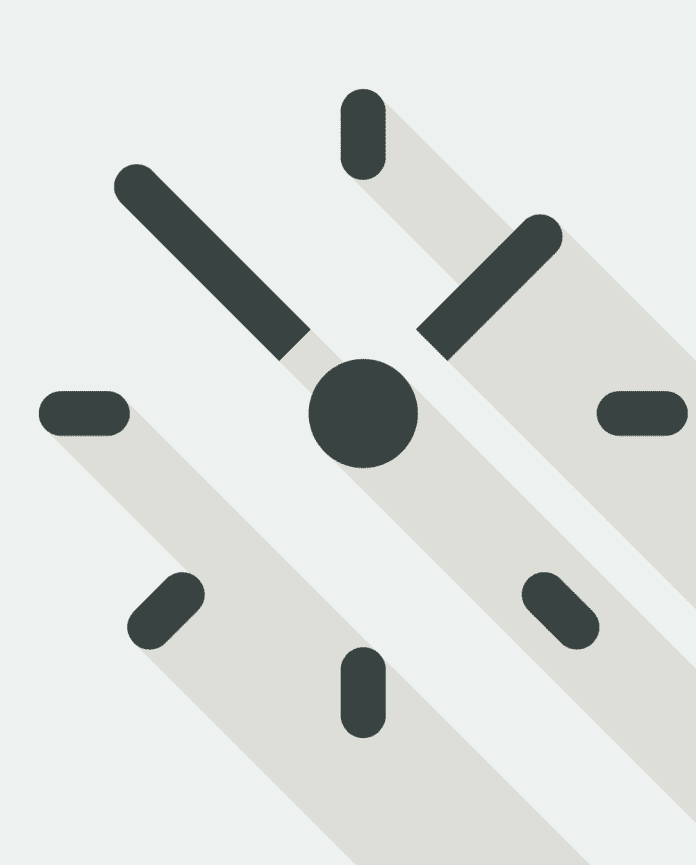 Administering time-sensitive medications (TSMs) within recommended time parameters is critical in preventing complications such as prolonged hospitalizations and recovery times. Administering them more than 30 minutes before or after the scheduled dose may result in substantial suboptimal therapy or pharmacologic effect and lead to patient harm. For example, failure to administer time-sensitive anticoagulants such as enoxaparin or dofetilide might leave patients vulnerable to venous thromboembolism.

administer TSMs within 30 minutes before or after the scheduled time. However, a 2010 survey by the Institute for Safe Medication Practices indicates that some nurses may not understand the importance of timely TSM administration or their hospital’s policy. The nurses who completed the survey reported that the 30-minute rule was unsafe, impossible to follow, frequently unnecessary, and clinically unrealistic. Instead, they treat TSMs as “routine medications,” administering them up to an hour before or after the scheduled time.

In an effort to increase nurses’ awareness, improve workflow, and expand adherence with TSM administration policy at our 250-bed community hospital, an evidence-based project was initiated.

Our hospital’s policy is that the attending physician must be notified immediately if TSMs aren’t administered within a 1-hour window (30 minutes before or after the scheduled time). Nurses chart “Provider notified” on the medication administration record (MAR) and complete a situation, background, assessment, recommendation (SBAR) note, which is filed in the patient’s electronic health record (EHR).

In 2017, newly hired nurses enrolled in the hospital’s nurse residency program (NRP)—a 1-year program that helps new nurses transition to clinical practice and includes completing an evidence-based project—discovered that not all nurses were following the TSM policy. Based on that data, the NRP team began working on methods to eliminate confusion about administering TSMs and empower nurses to adhere to the 30-minute rule.

Many nurses struggled to meet the hospital requirement to administer TSMs within the 30-minute window. In response, the NRP team initiated a visual cue pilot to improve nurses’ TSM administration. In 2016, Caby and colleagues reported that using visual cues is a successful strategy for improving nursing compliance.

The first visual cue created was a picture of an enoxaparin syringe overlaid on a stop sign background. Before implementing the project, however, the unit manager suggested conducting a poll on the design. The NRP team randomly surveyed 10 nonmedical personnel, five patient family members, and five patients. The perception of those surveyed was that the picture meant that the patient was either receiving commercial drugs, considered a “drug seeker,” or was “drug dependent.” Based on that feedback, the NRP team developed a more esthetically pleasing design: A smaller picture of enoxaparin and dofetilide was laminated and attached to a magnet and placed on the bedside computer monitor of patients receiving TSMs. However, after a month of using this visual cue, timely TSM administration remained low. 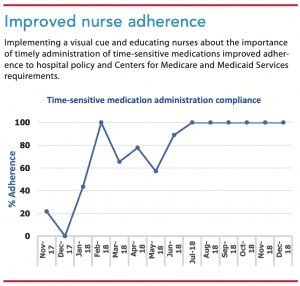 In January 2018, a final version of the visual cue was implemented—a laminated picture of a clock, which allows the nurse to use an erasable marker to indicate when the TSM is due. (See On the clock.) The charge nurse or the patient’s primary nurse is responsible for placing and removing the clock cue on the patient’s door sign holder.

In February 2018, the NRP team created an SBAR note to communicate with nurses about the new visual cue and the process for administering TSMs. The team also implemented a TSM discussion at the beginning-of-shift huddles. The unit team leader leaving shift identifies patients who are receiving TSMs and lists them on the unit huddle board, which is in the staff lounge. Before every shift huddle, the team leader updates the huddle board with patients’ room numbers and required TSM administration times.

After implementing the visual cue pilot in January 2018, nurse TSM administration adherence significantly increased (43.5%). In February 2018, the unit reached the target goal of 100%. However, in March, April, and May 2018, adherence decreased, indicating an opportunity for improvement. The NRP team identified two barriers to adherence—delays with pharmacy verification after a provider order and drug availability in the unit medication dispensing system. The team developed two processes to mitigate these barriers. To expedite verification, unit nurses call pharmacy technicians to alert them that the order was placed, and nurses use MAR messaging in the patient’s EHR to improve communication. By collaborating with the pharmacy department, the unit was able to sustain 100% TSM administration adherence through the rest of 2018. (See Improved nurse adherence.) 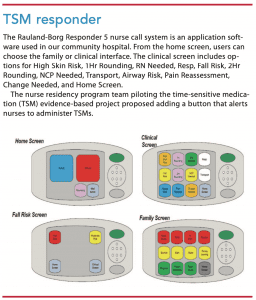 In 2019, data collection was put on hold because of medication administration policy revisions, which include medications that can be administered only in higher-level-of-care units where the pilot wasn’t conducted.

Two additional alerts have been implemented. A TSM administration alert was added to the Rauland-Borg Responder 5 nurse call system, and the patients’ EHR now includes an icon under the MAR that flags when medications should be administered. (See TSM responder.)

In a clinical encounter, nurses get to interview a patient, asking them the most private of questions, and with the help of a stethoscope...
Read more
Early Release

A video series dispels misinformation and increases vaccine confidence. Editor’s note: This is an early release of a web exclusive article for the July 2021...
Read more
Clinical Topics