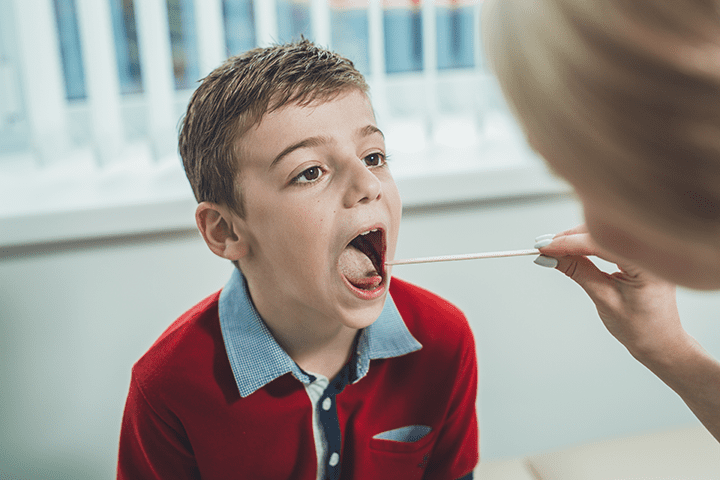 Learn about the connection between this rare condition and a common childhood illness.

Strep throat is considered a common and mostly benign infection in children. (See Strep throat snapshot.) In fact, it’s estimated that the average elementary-aged child will develop two to three strep infections each year. Most children who get strep throat recover fully with or without antibiotic treatment, but some don’t. One potential complication is pediatric autoimmune neuropsychiatric disorders associated with streptococcal infections (PANDAS), which is estimated to affect one in 2,000 children.

What are the symptoms?

The most telltale symptom of PANDAS is the sudden and dramatic onset of obsessive-compulsive disorder (OCD). The onset is unlike typical OCD behaviors that develop over months and even years. Parents often describe behavior changes as happening “overnight” or “out of the blue.” OCD can manifest as obsessive thoughts, compulsive behaviors, and/or motor or vocal tics. Other neurologic abnormalities, such as bedwetting, separation anxiety, extreme mood swings, anxiety attacks, and age-inappropriate behaviors, may accompany the dramatic appearance of OCD. Some children develop handwriting changes or problems with math or other subjects.

What are the risk factors?

Risk factors for developing PANDAS include recurrent group A beta-hemolytic streptococcal (GABHS) bacterium infections, a family history of rheumatic fever, the mother’s history of having an autoimmune disease, and being male (boys are three times more likely than girls to develop PANDAS).

How is it diagnosed?

Currently, no diagnostic test for PANDAS exists. According to the National Institute of Mental Health, a diagnosis is based on the presence of these five criteria:

PANDAS is rare, so sometimes the provider doesn’t make the connection between a GABHS infection and the onset of OCD symptoms. In many cases, the symptoms of GABHS have resolved or are simply overlooked because of concern about the more dramatic neurologic/behavioral changes.

With any sudden onset of OCD and other neurologic behaviors, a rapid antigen test and/or throat culture should be ordered to determine if the patient has an active GABHS infection. If no acute GABHS symptoms are present, two antistreptococcal antibody titers 4 to 6 weeks apart is recommended to determine if the child has had a recent infection.

The final diagnostic criterium is the child’s age at the onset of symptoms. As the name implies, PANDAS is a pediatric disorder; it affects children from 3 years old to puberty. Adults may experience immune-related OCD, but no cases have been reported in the literature. 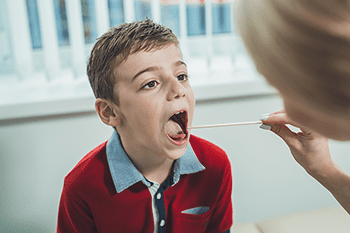 PANDAS treatment consists of antibiotics for the GABHS infection and management of the neuropsychiatric symptoms. Typically, OCD symptoms are managed with a combination of medications (usually a selective serotonin reuptake inhibitor [SSRI]) and cognitive behavioral therapy for 6 to 12 months after diagnosis. Children with PANDAS tend to be unusually sensitive to the side effects of SSRIs, so “starting low and going slow” (using low doses and making small incremental increases) is recommended. Anti-inflammatory medications such as ibuprofen or naproxen also may prove beneficial, especially for exacerbations such as fever and sore throat discomfort.

Although controversial, plasmapheresis (plasma exchange) or I.V. immunoglobin have been used to treat severe cases of PANDAS. Both treatments are invasive, have significant side effects, and pose a risk of infection; they’re not recommended for all cases of PANDAS.

Some children recover fully from PANDAS and others exhibit persistent neuropsychiatric symptoms. Currently, there’s no way to predict how each child will be affected by the disorder. Likewise, no preventive measures exist. Surgical removal of the tonsils hasn’t proven effective, and prophylactic antibiotics are controversial because they may lead to antibiotic resistance.

GABHS is quite common in children and hasn’t always been diagnosed at the time of the sudden onset of OCD symptoms. This has caused some providers to be skeptical of the association between OCD symptoms and GABHS. To address this concern, pediatric acute-onset neuropsychiatric syndrome (PANS) has been identified. This broader syndrome includes the sudden onset of OCD without the clear link to GABHS. PANDAS is considered a subset of PANS.

The link between infection and mental or behavioral behaviors isn’t new. In the early 20th century, neurosyphilis was considered a general constitutional weakness. And peptic ulcer disease was considered to be the result of stress. But we now know both are caused by bacterial infections. Evidence suggests that PANDAS will follow suit.

What is nursing’s role?

Nurses play a role in identifying PANDAS and then providing patients and families with support and education.

OCD symptoms often appear after GABHS infection symptoms have resolved, so families don’t make the connection. Your comprehensive assessment can identify a recent sore throat or other GABHS symptoms in conjunction with the sudden onset of neurologic symptoms. You can then recommend testing for GABHS.

Because OCD and other neurologic symptoms develop suddenly in this disorder, they can be frightening to the child and family. You can provide education about the disorder and help families navigate the healthcare system to obtain the appropriate care, including a psychiatrist for medication treatment and a therapist for cognitive behavioral therapy.

Successful treatment depends on adherence. Encourage families to schedule and attend appointments and follow dosing instructions for prescribed medications. If an SSRI is prescribed, explain to the family that they shouldn’t abruptly stop the medication; treatment duration is 6 to 12 months and the provider will taper the medication dose.

Tap into your strengths

Nurses often develop strong relationships with patients. Nurses are knowledgeable about the healthcare system, spend a great deal of time with patients and their families, provide care and support beyond the basics, and are perceived as being honest and trustworthy. A family dealing with the challenges of a PANDAS diagnosis will benefit from your knowledge, care, and honesty.

Joyce O’Reilly is an instructor in the College of Graduate and Professional Studies at Franklin Pierce University in Portsmouth, New Hampshire.