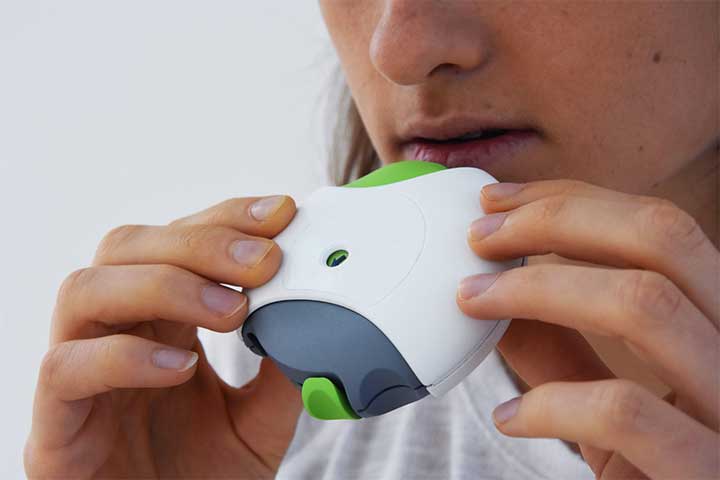 Elizabeth Battaglino Cahill, RN, named executive director of National Women’s Health Resource Center
The National Women’s Health Resource Center (NWHRC) has appointed Elizabeth Battaglino Cahill as its executive director. She will oversee NWHRC and develop innovative programs and strategies to advance education about women’s health concerns. A co-founder of NWHRC, Ms. Battaglino Cahill previously served as its executive vice president and director of marketing and consumer affairs. She also has coordinated women’s health community outreach programs at the state, local, and national levels.
http://www.healthywomen.org/content/press-release/nwhrc-names-elizabeth-battaglino-cahill-new-executive-director
Many patients use dry-powder inhalers incorrectly
About one-third of patients with asthma or chronic obstructive pulmonary disease don’t use their inhalers correctly. A study found that 32% made a crucial error when using dry-powder inhalers, and that the error rate increased with age and severity of airway obstruction. The study also revealed that one-third of patients weren’t taught how to use their inhalers.
www.chestnet.org/about/press/releases/2007/CHEST/071023InhalerErrors.php
Changing antihypertensive dosing times can reduce nocturnal blood pressure
Patients with chronic renal disease may be better off taking antihypertensives at night rather than in the morning. Among subjects in one study, this change helped normalize blood pressure patterns.
In healthy people, blood pressure drops about 10% to 20% during sleep. Hypertensives who don’t experience this “dip” are more likely to develop serious cardiac disease than those who do. Patients with chronic renal disease are most likely to be “nondippers,” which heightens their risk of worsening renal damage and cardiac disease. In the study, 32 “nondippers” switched from a morning antihypertensive dose to a nighttime dose. Within 2 months, nearly 90% had become “dippers,” with a 7-point drop in nocturnal blood pressure.
www.ajkd.org/article/PIIS0272638607011274/abstract?browse_volume=50&issue_key=S0272-6386%2807%29X0235-X&issue_preview=no&select1=no&select1=no&vol=
FDA approves first rapid MRSA test
The Food and Drug Administration (FDA) has approved the first rapid blood test for methicillin-resistant Staphylococcus aureus (MRSA), a potentially fatal infection. The BD
GeneOhm StaphSR Assay uses molecular methods to determine whether a blood sample contains genetic material from the MRSA bacterium or from the more common staphylococcal bacterium that responds to methicillin. The test detects both staphylococcus types within 2 hours.
www.fda.gov/bbs/topics/NEWS/2007/NEW01768.html
Moderate activity can decrease vascular dementia risk
Moderate physical activity may reduce the risk of vascular dementia but not Alzheimer’s disease. Researchers followed 749 Italian adults age 65 and older for 4 years; none of the subjects had cognitive impairment at enrollment. During those 4 years, 54 developed Alzheimer’s disease and 27 developed vascular dementia. The more active subjects had a 70% to 75% lower risk of vascular dementia than the least active ones.
www.neurology.org/cgi/content/abstract/01.wnl.0000296276.50595.86v1
Super-sensitive microchip finds tumor cells circulating in blood
Researchers have created a highly sensitive silicon chip that can isolate, count, and analyze tiny tumor fragments circulating in the bloodstream. Using antibody-coated microscopic posts, the device traps cancer cells while leaving blood cells behind. Ultimately, it may help physicians detect, diagnose, and monitor cancer.
www.nature.com/nature/journal/v450/n7173/full/nature06385.html
Patients with mild asthma less likely to take inhaled steroids
According to a new study, patients with milder asthma are more likely to neglect to take their prescribed inhaled corticosteroids (ICSs) than those with more severe asthma. Almost 10% of mild asthma sufferers never fill their ICS prescriptions, possibly because they have less of a perceived need for the drugs. Researchers examined rates of primary nonadherence and related factors among 1,064 asthmatics. Female sex, younger age, African-American ethnicity, and less beta-agonist use were all linked to higher nonadherence rates.
http://www.jacionline.org/article/PIIS0091674907015862/abstract?browse_volume=120&issue_key=S0091-6749%2807%25
New antiviral recommendations after HIV exposure
The Centers for Disease Control and Prevention has made two important changes to its 2005 recommendations for prophylactic antiretroviral use after occupational exposure to human immunodeficiency virus (HIV):
• Kaletra, a combination protease inhibitor, is no longer available in its original formulation. So instead of prescribing three tablets twice daily, healthcare providers should prescribe two tablets twice daily of 200 mg lopinavir and 50 mg ritonavir.
• Viracept (nelfinavir), another protease inhibitor, shouldn’t be prescribed for pregnant women because it contains a manufacturing byproduct that’s potentially carcinogenic and teratogenic.
www.cdc.gov/mmwr/preview/mmwrhtml/mm5649a4.htm

July 30, 2:00PM EST
The COVID Effect: How New Cyberthreats Put Patients at Risk and How You Can Stop Them Webinar