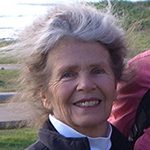 My journey, post-graduation from the University of Cincinnati took me to New York City where I taught pediatric nursing at Babies Hospital, Columbia University. The chief resident of pediatrics organized the first Peace Corps medical team to go to Togo, French West Africa in 1962. I was recruited along with 30 other medical people — doctors, nurses, lab techs, a pharmacist, sanitation engineer and others. I met my husband the first day of Peace Corps training, and we were married 8 weeks later on my parent’s farm near Dayton, Ohio.

Our Peace Corps mission was to teach preventive health, but to do that we had to gain the trust of the people. For the entire first year, we worked with them in an abandoned hospital where we treated — and nurtured — them back to health. The second year we were able to teach them various health promoting behaviors — nutrition, latrine building, hand washing, etc.

We all noted and remarked on the outstanding emotional well being of the African infant, either sick or healthy. All of the babies and young toddlers are carried on the mother’s back and they are all breastfed. When the babies were not asleep on their mothers’ back, they were alert, curious, looking all around and appearing to be very content.

In the market place, there was very little crying. At the hospital, the mother brought the other siblings along with the sick child and they all camped out on mats on the floor. This ‘backward nation’ was doing “rooming in” long before hospitals in the United States started the practice! Keeping the mother with the sick child was soothing to the child and helpful for the caregivers. What we were observing was “bonding, but we didn’t use that word in the early 60’s.

Four weeks after we returned to Colorado from our 2-year stint in Togo, our daughter Mandela was born. My mother flew out from Ohio to Denver that first week and we worked out a way for me to carry Mande with me with no thought of marketing this carrier. (I tried using the African method of one long piece of fabric, bending over, placing the baby on my back, wrapping the fabric around the baby and tying the loose ends in front of my chest and waist, but it didn’t work for me. The baby always slipped down my back.) However, with our newly developed carrier, I had my hands free and a very content newborn on my back.

In the early 1960s, no one carried their baby on them, they carried them in plastic infant seats that allowed no warm body connection between the baby and the wearer. The LaLeche League and natural child-birth parents were just becoming popular, and when they saw me wearing Mande they’d ask where they could purchase this carrier. I called my mother who went to the fabric store to buy 2 yards of corduroy and sew another. She sent them to our home in Evergreen, Colorado and I mailed them to our “customers.”

We were very excited about the growing interest in carrying babies this way; knowing that this would contribute to more emotional security for the infant and more peace for the parent. So many times when Mande would be fussy, I would put her in my baby carrier and immediately she would be content. Some people criticized me for “spoiling” the baby, but I strongly believed (and still believe) that satisfying the needs of an infant instills trust, which contributes to greater security.

Demand for this baby carrier grew by word of mouth, and mother had to turn to her friends for help. They were members of the Old Order German Baptist (known as Dunkard) Church who sewed all of their own clothes because they will not wear “worldly clothes.” Thus, they are excellent seamstresses. At one time, we had 150 farm women around the Dayton, Ohio area making our baby carriers! It was a really beautiful cottage industry. As demand continued to grow, we created a focus group which decided to call the baby carrier the “Snugli.” We applied for a patent and it was granted in 1969. The sales were mostly mail order the first few years. Then, later, stores became interested.

Later, a study was done at Columbia University on what was called the “Snugli effect.” The principal findings were that the attachment quotient was much higher and infant vocalization much earlier for babies who were carried in the Snugli than for the control group.

We then developed an “infant” carrier, which also received a patent. The Snugli was designed to carry a baby up to two years old. The infant carrier was designed for carrying infants in the first 6 months of life. We also designed various other products: a rain cape, a quiet book (usually made out of fabric and filled with quiet activities for children. It’s often used for special times, like church, when you need to keep children happy and quiet), a dolly Snugli, and a carry bed. We introduced lambskins from New Zealand after reviewing the value of the tactile stimulation and the weight gain of premature infants placed on lambskins. We created a Snugli for premature infants and a Snugli for twins.

We introduced Snugli to the European market in 1976 and to Japan in 1979. A customer sent us a somewhat worn Snugli that had 18 names embroidered on it representing each baby that had been carried in it. We have received fun photos with zoo keepers carrying small monkeys in a Snugli and dogs being carried in a Snugli. A Snugli is in the Lemelsen Center at the Smithsonian Museum of American History.

By the time we sold the company in 1985, over 1.5 million babies had been carried in Snuglis. We were given an award for realizing the 3rd goal of the Peace Corps which is to bring something we learned in our 2-year experience and introducing that into our own culture. There are many baby carriers available now, a fact which gives us great joy for all of that possible “bonding” that is taking place. We hope that this bonding will result in happier, more secure adults.

In 1986, we then started another company, Air Lift Unlimited. A friend who is a respiratory therapist asked if I could design a way for people who are oxygen dependent to carry their oxygen. Subsequently, we created and patented a backpack for portable oxygen — and this took us into home health care. We then developed various products for carrying oxygen on wheel chairs, walkers, etc. A number of medical equipment companies asked us to make cases for housing their medical devices — and we were very busy with keeping up with the orders and design work. We sold that company in 2013.

Although I have officially retired, my husband and I continue to host international visitors sent to us through the State Department. We travel extensively with the Yale Alumni Chorus internationally and participate in Rotary. Rotary International is an international service organization whose purpose is to bring together business and professional leaders in order to provide humanitarian services, encourage high ethical standards in all vocations, and to advance goodwill and peace around the world. It is a secular organization open to all people regardless of race, color, creed, religion, gender, or political preference. Rotary also took us to Ghana to help do polio vaccinations. We visited Iran a few months ago.

If there is one thing I am sure of, it is that we are all one big human family on this wonderful planet.

Ann Moore graduated in 1956 from the University of Cincinnati School of Nursing. She lives in Evergreen, Colorado.