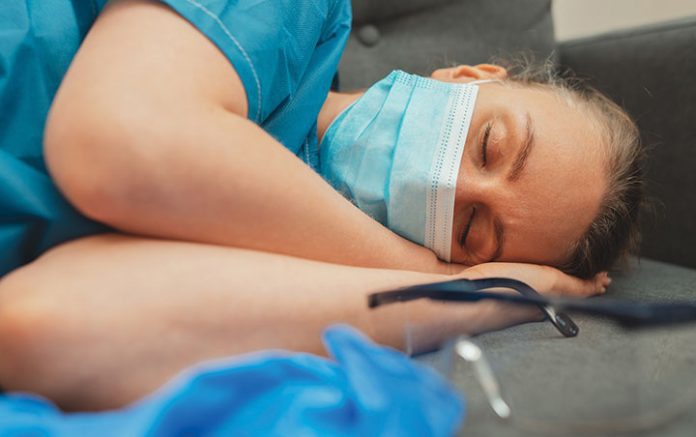 How to implement planned naps for hospital nurses.

To nap or not to nap? That’s a question we recommend all hospital nurses and administrators ask and answer, especially for nurses working long shifts (12 hours or more). The 2014 American Nurses Association (ANA) position statement recommends naps as a strategy to combat fatigue. It also emphasizes the shared responsibility of nurses and administrators to support and monitor rest and breaks during long shifts to mitigate and manage occupational fatigue risk and ultimately promote nurse health and patient safety.

However, planned naps don’t happen overnight. Hospital nurse nap practices range from many who “never nap” to a few who “never miss a nap.” Although most hospitals have designated staff sleep rooms, they’re typically for physicians or residents. In a 2017 survey of American nurse leaders, most (95.5%) reported they didn’t have a hospital policy supporting nurse naps.

Since 2010, nursing research and leadership council members at Mission Hospital, a Level II trauma center with Magnet® designation, have studied hospital nurse fatigue and mitigation strategies. In this article we describe our efforts to create a work environment that supports planned naps using three organizational phases of the diffusion of innovation theory: adoption (the decision to commit to the innovation), implementation (carrying out the innovation), and sustainability (integrating the program into the organization so it continues over time).

With support from the chief nursing officer (CNO), our study team conducted hospital-wide surveys in 2012 and 2016 to measure and identify changes in nurse fatigue. Results (Drake and Steege) showed that approximately 23% of 420 hospital nurses reported high levels of fatigue, including high levels of acute fatigue after working long shifts, low levels of recovery between shifts, and high levels of chronic fatigue. Further analysis indicated that nurses with high levels of fatigue reported poorer health and wellness scores and poorer hospital safety culture scores.

With confidence in our ability to measure nurse fatigue, we designed a study to test the feasibility of a planned nap intervention on a single hospital unit and to measure the risks and benefits. The study received expedited approval from the institutional review board. Before implementing the intervention, study team members met with the CNO and human resources director to review and update the hospital meal and rest policy. The updated policy was reviewed with nursing staff to reassure participants that taking a planned nap wouldn’t result in punishment associated with sleeping on the job.

Participants included unit nurses (n=19) who worked full-time 12-hour night shifts for at least 6-months and didn’t have a primary sleep disorder. After completing NIOSH training, they were asked to schedule a planned nap or rest during each shift, over a period of 12 weeks, record nap participation in a coded study log collected weekly from the nap room, and complete three online fatigue and sleep surveys. The unit charge nurse coordinated a sign-up sheet for each nurse to schedule planned naps during break times between 1 am and 4 am.

The planned nap was a 30-minute scheduled rest period that included 20 minutes of rest or sleep followed by a 10-minute recovery period to awaken and return to work. Naps were encouraged, but if nurses didn’t sleep, they were asked to rest quietly. A dedicated room for napping was located in the middle of the unit behind the nurses’ station. A planned nap protocol guided program implementation. (See Planned nap protocol.)

The Mission Hospital planned nap protocol includes a 30-minute rest period with 20 minutes of rest or sleep followed by 10 minutes to recover and return to work.

Nurses should take these steps for each planned nap:

Nurses were responsible to begin and end their planned nap break and return to work alert and on time. They also were responsible for discarding used linens and any other refuse and cleaning used surfaces in the nap room. Coworkers were asked to be considerate and quiet near the room.

The designated nap room sparked a great deal of interest among unit nurses, and physicians were curious to learn more about planned naps. Several nonparticipant nurses assumed the room was for physicians and later expressed “nap envy,” regretting that they didn’t enroll in the study.

Before the study, 54% of participants reported never napping at work, and 46% reported napping only occasionally. During the study, nurses scheduled planned naps in 62% of the shifts worked. Follow-up surveys (at 6 and 12 weeks) indicated planned naps were safe, feasible, and associated with decreased chronic fatigue and sleepiness.

Administrative and unit leaders continued to support the planned nap protocol after the study ended. Many nurses used the designated nap room after the 12-week study, and other unit nurses began planned naps after completing NIOSH training. Several nurses who had worked night shifts for many years without naps and had considered themselves successful at maintaining a good work–life balance felt empowered to engage in planned naps to improve their sleep health.

Hospital nurses have many reasons not to rest or nap during work, and units may lack administration support to provide adequate spaces for quiet, secure, undisturbed naps. In addition, individual nurse preference and unit culture may make naps seem impossible, undesirable, or unprofessional. Sustaining a planned nap strategy requires removing barriers and creating an environment that encourages nurses to participate in this healthy practice.

For example, although many units provide a break room where nurses can rest or eat away from patient care, designated planned nap spaces aren’t common. Ideally, the planned nap room should be convenient to the unit and away from noise and disruption. Units with fewer nurses may be able to use a single room; however, if possible, space that accommodates more beds or reclining chairs with privacy dividers can help increase use.

All hospital nurses should complete NIOSH training and acquire sleep hygiene education to ensure they understand the importance of adequate sleep to their health and patient safety. Unit nurses and administration should monitor and evaluate planned nap participation and encourage nurses who miss breaks and rest periods to measure their fatigue and sleepiness using NIOSH instruments. Nurses who are reluctant to take breaks because of concerns about patient care in their absence should be supported in clearly establishing solutions with prompt manager assistance.

To sustain our napping program, we continue to clarify policies and protocols that encourage taking regular breaks and, when possible, longer breaks that can improve planned nap participation. We’re also aware that we have more work to do. In 2020, we conducted an informal survey of nurse managers (representing 80% of all hospital units) to determine whether nurses take naps during long shifts. On average, 35% of night shift nurses took naps and day shift nurses rarely or never took naps. Naps were more common when units had a quiet room with a reclining chair.

Dedicated nap rooms and planned nap sign-up schedules have been difficult to integrate consistently on all hospital units, which has limited our ability to measure the frequency and effect of planned naps. Unit managers familiar with NIOSH recommendations continue to support the importance of fatigue risk management strategies and planned naps, especially with new staff. Several units have created informal communication to coordinate nap breaks instead of using the formal sign-up sheets. CNO and nursing director leadership and coordination have helped establish several new designated nap rooms and create an environment that supports planned naps. Planned naps seem to have increased during the pandemic, although this has not been confirmed with data. (See Resources.)

Several devices can be used to aid good sleep hygiene and planned naps at work.

You can find a list of free online training resources related to sleep here.

Make a plan to nap

Although no current national measures report hospital nurse fatigue and countermeasures, we believe most hospital nurses work long shifts without planned naps. Sleep hygiene, fatigue mitigation, and recovery opportunities are essential tools for all nurses working long shifts. We encourage hospital nurses and administrators to review the NIOSH resources for nurse fatigue management published during the 2020 pandemic. We also recommend planned naps as an effective and feasible strategy. With strategic collaboration and diffusion of innovation, a planned nap protocol can be adapted for most hospital units.

To nap or not to nap? It’s time to put this matter to rest and plan naps for hospital nurses working long shifts.