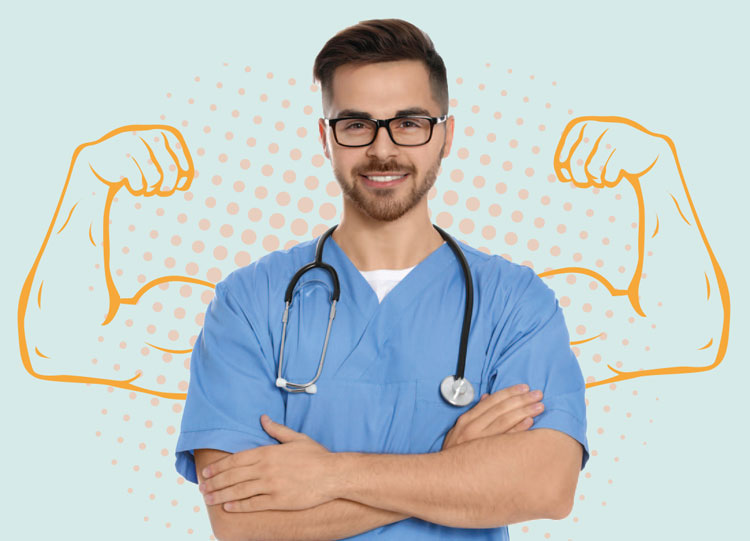 Learn how to use power in the service of others.

MARK is completing his first year as nurse manager of an urgent care center. More than 25% of the nursing staff has resigned in the last 12 months. A recurring theme in exit interviews is that Mark uses coercive power to achieve his goals. A leadership coach has been assigned to work with Mark to help him gain insight into how he uses power and to help him use it wisely to achieve unit objectives and help staff achieve their full potential.

Some new managers like Mark have a burning desire to make changes and solve problems. To achieve their goals, they use their newly minted authority coercively and alienate staff. In the absence of any counterbalance, staff may feel that resigning is the only psychologically safe way to push back against Mark’s decision-making. With RN turnover costs now averaging more than $52,000 per nurse, Mark’s misuse of power has come at a high price to his organization. He’ll need to commit to using coaching as an opportunity to reflect on what’s happened or he might derail his leadership.

John Maxwell, a nationally known leadership expert, notes that just because you’ve been crowned the leader doesn’t mean that you’re leading. If people don’t follow you, then you’re not a leader.

Leaders are entrusted with power and are expected to use it wisely. They drive unit culture and values through their actions and behaviors. Coercive behavior sends a strong message to staff that their opinions and ideas aren’t respected. Trust is eroded when staff don’t feel safe to participate in discussions because they fear retribution.

The contemporary nursing workforce doesn’t respond well to command-and-control leaders. In recent research reported by Gallup, Millennial employees will quickly leave organizations where they feel that they aren’t nurtured and developed by their managers. Mark’s coach is likely to point out that power can be beneficial if used constructively. This will involve more reliance on influence-building skills and less on coercion as a source of power.

Jeffrey Pfeffer, a noted scholar on power, has observed that most leadership-development programs don’t directly discuss the concept of power, and nurse managers like Mark may not realize the impact of their behavior. Mark’s coach should guide him to move from his current coercive source of power and tap into a source that’s less self-serving and more group serving. (See 5 power sources.) 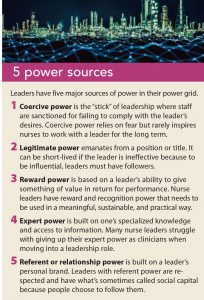 Using power wisely stems from understanding how our actions affect others and being aware of the appropriateness of our actions. In clinical settings, power should be used to improve work environments for direct patient care providers and to produce positive patient outcomes. Given the turnover rates under his leadership, Mark hasn’t used his power wisely. His coercive use of power has resulted in an environment of dominance motivation to control others and put his goals above his teams’. With the leadership coach’s help, Mark will need to transform his dominance motivation style to an inspirational motivation style, which will empower the staff and engage them in decision-making and constructive feedback that benefits patient outcomes.

Using power wisely requires not only self-reflection and positive motivation of those you lead, but also understanding the resulting value that comes from these actions. For Mark, the value is an engaged and productive staff who are committed to the organization.

To determine how power is affecting your work environment, learn to identify power plays, which are actions taken by someone to manipulate another into doing or not doing something, and teach employees to do the same. In Mark’s case, employees who resigned said that he used coercive tactics, which suggests using force (threatening write-ups, demotion, or layoffs) to get others to comply. Mark may have found this effective in the short term, but such a power play can have serious organizational consequences.

Recognizing power plays by a coercive leader like Mark may be relatively easy because of the clear potential end result of punishment. However, power plays can be subtle, so it’s also important to know how you might unintentionally create pressure on employees. Take, for example, the employee who takes on increasingly more work responsibilities because her leader asks her, even though it’s creating a poor work-life balance. In this example the leader is using her power to increase an employee’s workload. In turn, the employee feels obligated to take on the additional work because her leader is asking. However, the result is poor job satisfaction and increased feelings of burnout and resentment. For the leader to avoid losing an employee who’s likely highly productive and an asset to the workplace, the employee needs to set healthy boundaries that the leader will respect.

Recognizing power plays also requires being aware of feelings of resentment, avoidance behaviors, being too compliant, and excessive complaining, which contribute to a poor work environment that’s unproductive and riddled with communication failure. When these behaviors are present in the clinical setting, patient outcomes and safety are at risk. Instead, leaders and employees must recognize power plays and stop them through effective respectful communication.

The consequences of using coercive power as Mark did can have devastating outcomes for the leader and staff. It erodes trust and leads to unhealthy work environments. Nurse leaders are expected to motivate, influence, and inspire staff to achieve excellent patient outcomes. This is done most effectively when they use their power wisely and rely on their influence. In some circumstances, nurse leaders may need to use power, but they must exercise judgment to know when it’s appropriate and what form it should take.

As Jim Rohn, an entrepreneur and motivational speaker, once said, “The challenge of leadership is to be strong, but not rude; be kind, but not weak; be bold, but not a bully; be thoughtful, but not lazy; be humble, but not timid; be proud, but not arrogant; have humor, but without folly.”

Ultimately, the best use of power is in the service of others.

Rose O. Sherman is a professor emeritus at Florida Atlantic University in Boca Raton, Florida, and author of the book The Nurse Leader Coach: Become the Boss No One Wants to Leave. You can read her blog at emergingrnleader.com. Tanya M. Cohn is an associate professor of practice and consulting nurse scientist at Simmons University in Boston, Massachusetts.