These are some of the takeaways from American Nurse Today’s second annual Nursing Trends and Salary Survey; 4,396 nurses from across the country responded. About a quarter of the responders identify themselves as managers, while most are nurses working in various clinical settings.

Last year, we wanted to learn what keeps nurses satisfied, what they value, and how they perceive their work environments. This year, we decided to ask about violence and added 29 questions related to verbal, physical, and sexual assault by patients, their families, and professional colleagues in the past 2 years.

Nearly one in five (19.68%) of respondents report they’ve been physically assaulted by a patient. Of those who had been assaulted, fewer than half (42%) say they made both written and verbal reports. Nearly half (47.87%) of those who reported the incident aren’t satisfied with the way it was handled. Only 2.33% of respondents say they were physically assaulted by patients’ family members or visitors in the last 2 years.

More than half (55%) of respondents say they’ve been verbally assaulted by patients. Most of those who had been verbally assaulted weren’t hesitant to say so, with 67.23% reporting it either verbally, in writing, or both; however, nearly a third (32.77%) didn’t take action. Among those who did report the assault, almost 55% say they’re satisfied with the response to their report. Fewer nurses had been verbally assaulted by patients’ families, but the number is still significant at 39.51%. About 70% say they reported the incident verbally and/or in writing, with about half of those (51.19%) indicating they’re satisfied with managers’ responses—and half not so much.

Overall, nurses are less likely to be satisfied with responses to reports of physical than verbal assault.

Verbal or physical assault from other healthcare workers

More than a third (35.68%) of survey respondents say they’ve been verbally assaulted by another employee or healthcare worker. Of those who had been assaulted, more than 70% reported the incident and of those more than 70% aren’t happy with how it was handled.

Respondents’ reports of incidents of physical assaults from another employee or healthcare worker is only 1.85%, although, of course, the expectation is zero. Strikingly, a third (36.11%) failed to report the incident.

Assaults by other employees and healthcare workers resulted in the lowest levels of satisfaction with the response to reports about the incidents.

About 10.53% of respondents say they’ve been sexually harassed. Of those who were harassed and reported the incident, only 37.67% are satisfied with the response to the report. 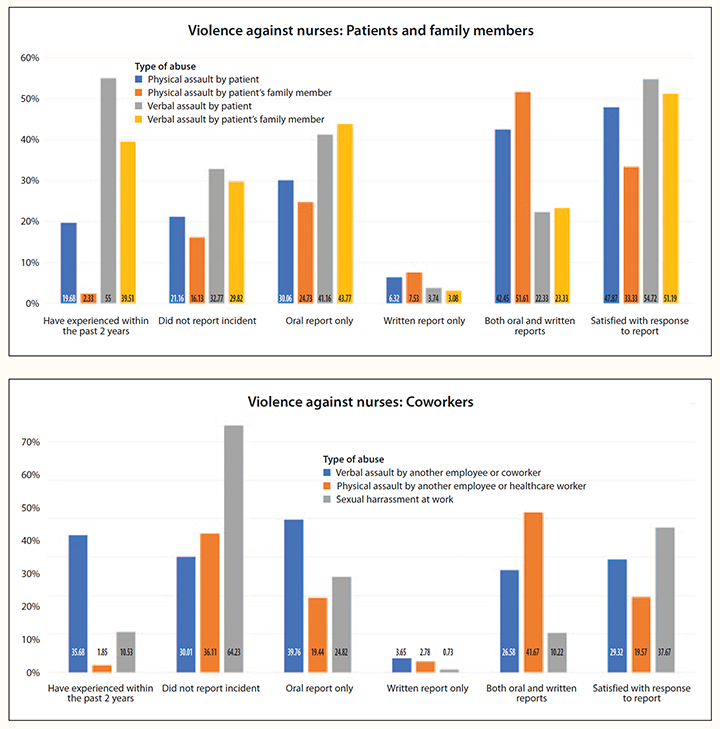 An example of where organizations have made an effort is training. In all, 71.63% of respondents have received or arranged for training in how to de-escalate patients, family members, or visitors who are becoming agitated, and an overwhelming 83.83% find the training helpful and 71.17% have applied it in their practice.

However, nurses don’t always take advantage of what organizations offer. For example, 88.49% of respondents say their organization has a formal protocol for reporting workplace violence, but too few nurses responded that they reported incidents. Not reporting makes it difficult for organizations to track trends.

How are we getting along?

Great, according to our survey respondents; for example, 9 of 10 are satisfied with their relationships with peers. Interactions with our peers are apparently complex. Complaints of bullying and incivility within our ranks are reported almost daily, but respondents to this survey say that it’s these same colleagues who, along with salaries, patient care, and career growth, bring them the most satisfaction in their jobs.

However, more than a third (35.68%) of respondents say they’ve been verbally assaulted by peers or other healthcare workers of all categories.

When someone else was being bullied during the past 2 years, 62.83% of respondents say they intervened. There was a three-way split between the interventions taken in response to bullying: 43.9% reprimanded the bully in public, 49.66% spoke privately with the bully, and 43.5% reported the incident to a manager.

Show me the money

Nurses are benefitting from the United States’ red-hot economy and low unemployment rate. Raises have started to climb among American workers, a trend also reported by nurses in the survey.

Nearly 60% of survey respondents say their salaries have increased in the last 12 months. About 64% say they received raises in the last year, and 17% say they received a raise 2 years ago. That’s a good thing for healthcare systems because salary is rated by the respondents as the most important consideration when choosing a job. Almost 70% of nurses rated salary and patient care as their number one and two job satisfiers. Career growth landed in the third spot.

Nurses will likely continue to benefit from increased demand. According to the U.S. News and World Report’s “The 100 Best Jobs” for 2018 (money.usnews.com/careers/best-jobs/rankings/the-100-best-jobs), which ranked RN as #18, RNs have a 1.2% unemployment rate, with 437,000 projected jobs. 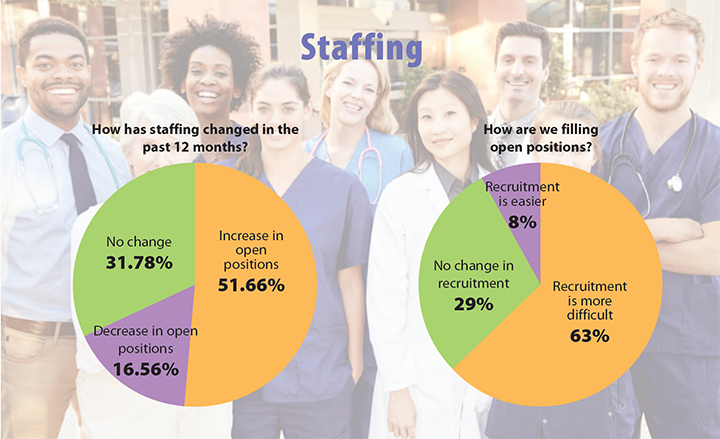 Nurse managers are facing significant staffing challenges, including more open positions, reported by 51.85% of respondents. In all, 63% report that recruiting RNs is more difficult, while almost 29% say there’s been no change, and only around 8% say it’s easier.

Managers report being remarkably happy with all the people with whom they work. Relationships with peers (3.88 weighted average), people who report to them (3.86), physicians (3.74), and supervisors (3.63) to whom they report are all rated at fairly high levels.

Acuity-based electronic staffing systems aren’t taking hospitals by storm. Only 15.32% of respondents say their facility uses such a system (comparable to 16% last year), and only 3.83% say their facilities have plans to implement acuity-based systems within 6 months. The remainder of managers who responded either don’t work in a hospital (46.27%) or aren’t using such a system (34.58%).

Only 17.83% of managers are certified in leadership, compared with 37.66% of frontline nurses who hold certification in their specialty. 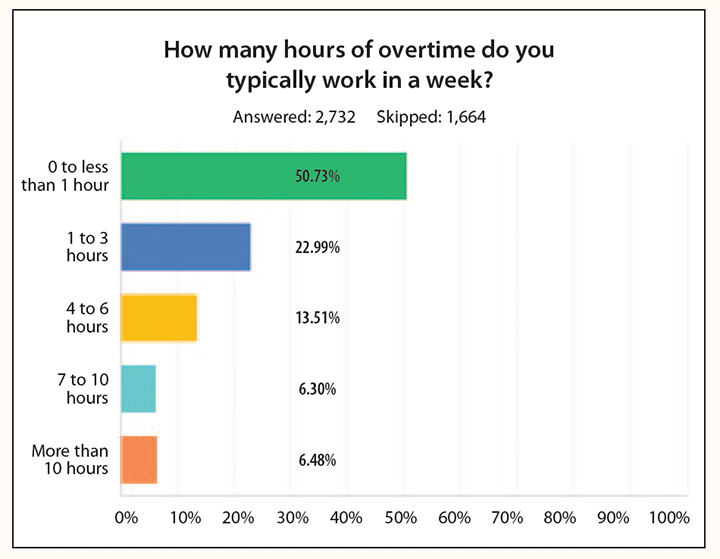 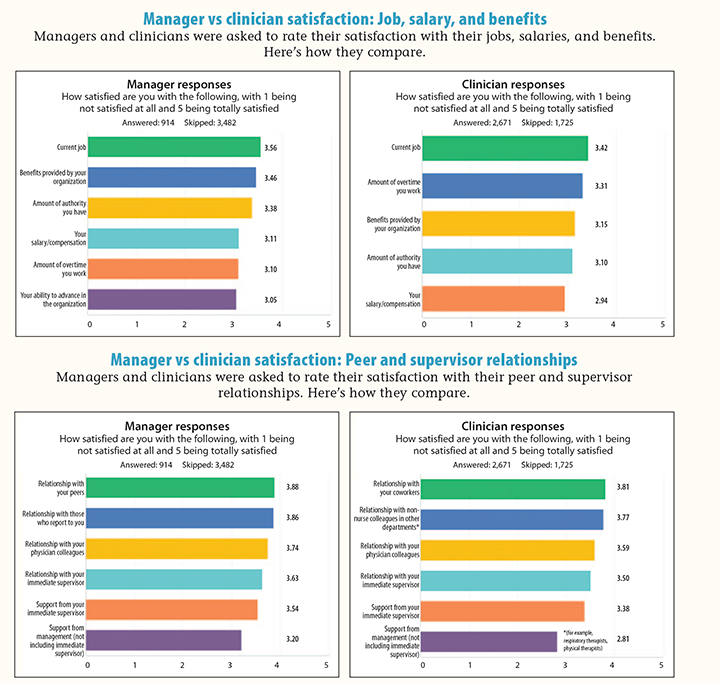 Most nurse clinician respondents (62%) work in acute care, a percentage comparable with national averages, and more than half (51.1%) work 12-hour shifts on a regular basis, despite safety concerns associated with this shift. Only 15.56% work for employers with mandatory overtime, and about half (50.73%) typically work no or little overtime (less than 1 hour a week). Most clinicians self-identify as clinical/staff nurse (61.84%) and additional 8.65% identify as an advanced practice nurse, with that same percentage identifying themselves as a charge nurse or similar role (shift level responsibility).

Although horizontal violence has been a long-standing concern of nurses, among respondents, 89% of staff nurses say they’re satisfied with their relationships with coworkers. Their least satisfying relationships are with higher levels of management.

Like managers, clinicians are happy with the people with whom they work. Relationships with coworkers (3.81 weighted average), non-nurse colleagues in other departments (3.77), physicians (3.59), and supervisors (3.50) to whom they report are all rated at fairly high levels. However, only 57.36% of nurses who responded are satisfied with support from upper management (weighted average 2.81, the lowest figure for both managers and clinicians).

Of nurses who work with patients, 56.75% say they work in hospitals. The next largest group of respondents report working in academic settings (10.03%) or providers’ offices (6.27%). 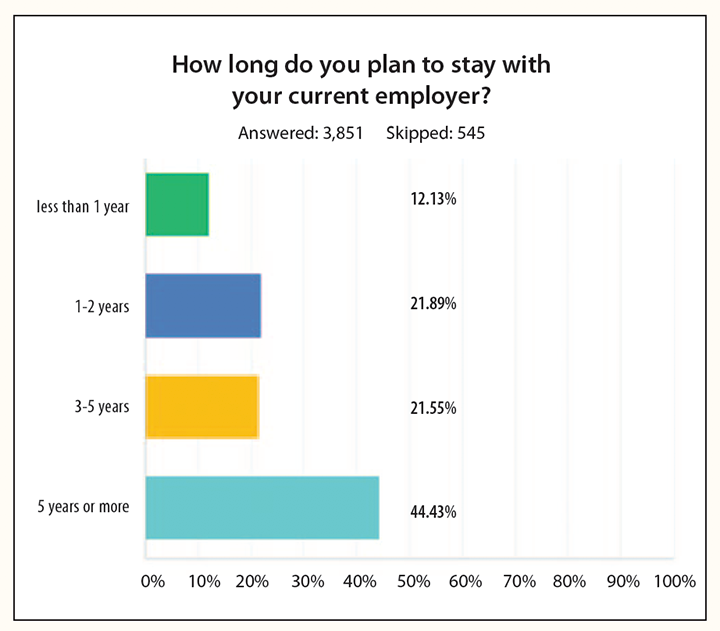 Although more than 50% of nurses are older than 50, the survey indicates that 54.18% of responders don’t plan on retiring before 2025. About 13% say they plan to retire between 2023 and 2025, and 18.46% don’t know when they’ll retire. Employers can take some comfort in the fact that 44.43% of respondents plan to stay with their current employer 5 years or more. Those who aren’t currently looking for another employer most commonly cite more money (37.15%) as the factor that would make them change their minds.

Thank you to everyone who took time to complete the survey.

Janet M. Boivin is a freelance writer near Boston.