Learn what more than 4,000 nurses from across the country are saying about important issues—from bullying to COVID-19 to salary. 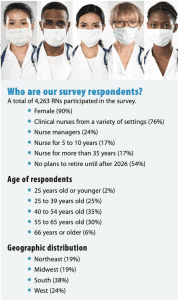 The results of American Nurse Journal’s fourth annual Nursing Trends and Salary Survey reveal much about nursing during this tumultuous year. Despite the COVID-19 pandemic and associated challenges, 85% of survey respondents say they would still become a nurse if they had it to do over again. This has not changed significantly in the past 2 years (84% in 2019, 85% in 2018). However, individual responses and comments were likely influenced by the burden of local coronavirus outbreaks on a respondent’s employer and how individual nurses’ and their families’ health have been impacted. Here’s more about what nurses are saying.

COVID-19 and the nursing workforce

Little national data exist that measure how the COVID-19 pandemic may affect the nursing shortage. According to the Nursing Trends and Salary Survey, 85% of respondents say the pandemic hasn’t changed their career plans, 11% plan to change their job or specialty, and 2% plan to leave nursing. In light of COVID-19, this may sound like good news; however, with nearly 3 million employed RNs across the country, even 2% is a big loss. The survey also found that one-third (33%) of those changing jobs or leaving nursing are from the south, including states hardest hit by the pandemic, such as Florida and Texas.

More than two-thirds (69%) of respondents say they’re satisfied with their employer’s response to COVID-19, with 23% being totally satisfied. More than half (58%) say their organization is well prepared or extremely prepared to handle a surge in patients from a pandemic, natural disaster, or other reason for a sudden influx of patients. However, that means over 40% don’t think their organization is prepared.

A total of 69% of respondents said they’re satisfied with their salary/compensation, and 75% report satisfaction with benefits provided by their organizations. A full 87% of respondents receive paid time off, including sick time and vacation.

Survey respondents left a total of 1,464 comments about how the pandemic is affecting them and their practice. Here’s a sampling.

• “I am more committed than ever to nursing…”

• “…the stress of working during the pandemic has strengthened the bonds of our team.”

• “The lack of visitors has been tough on patients who need moral support.”

• “It is fascinating to work in the time of a novel virus.”

• “A lot of nurses and doctors were put at a high risk because of lack of supplies.”

• “My hospital was very supportive of nursing staff and provided adequate training and PPE.”

• “There is much bullying and negativity for those unable to care for COVID patients due to physical limitations, i.e., age, im- munocompromised, pregnant.”

• “…there will be long-term effects of the stress and trauma that will affect the profession for years to come.”

• “It is redefining healthcare as we know it. My hope is that nurs- es’ voices will be heard and honored…”

Here’s some insight into nurses and length of employment.

What turns a nurse’s head toward another employer?

Most respondents (84%) are satisfied with their current job, but higher pay and an improved setting are the top reasons nurses would accept another position. Survey respondents who aren’t currently looking for another employer were asked to choose up to three options that would make them change jobs. Money was the most common choice (62.5%). Almost one-third (31%) say they would change for a different type of job/more meaningful work, and 30% say they would make a change for a more positive work environment. On a possibly related note, more than half (56%) of respondents report that their workload has increased in the past 12 months.

Satisfaction with current job, salary/compensation, benefits, and amount of authority were fairly comparable between clinicians and managers. Both groups also reported fairly high satisfaction with peer and supervisor relationships.

One-fifth (20%) of manager respondents work in a community hospital, and 42% serve on a value-based purchasing committee or make purchasing decisions. Only 18% are certified in nursing leadership, which is similar to 2019. Among those certified, the most common certifications are the two available through the American Nurses Credentialing Center (Nurse Executive-Board Certified and Nurse Executive Advanced-Board Certified).

Hours worked in a typical week 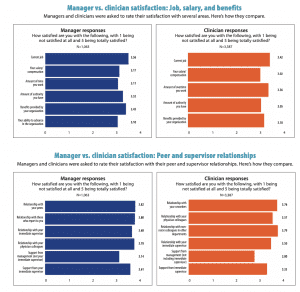 Many respondents work in teaching hospitals (27%), followed by community hospitals (23%) and academic medical centers (15%). Certification among clinical nurses is growing, and 42% are certified in their specialty compared to 35% in 2019. Most (83%) have a bachelor’s degree or higher, and 65% aren’t seeking or planning to seek another degree in the next 6 months.

Hours worked in a typical week

This year, we asked for more details about workplace violence occurrences in the past 2 years, including why an incident wasn’t reported, the type of report filed, and satisfaction with follow-up.

Bullying and violence among coworkers

Almost one-fifth (18%) had been verbally assaulted or bullied by their manager.

About half of respondents (46%) say they intervened when they witnessed workplace bullying. Only 8% didn’t intervene (46% didn’t witness bullying during that time). Many (38%) reported the incident verbally. Of those who reported, only 27% were satisfied with how the situation was handled. One possible explanation for this low number may be that managers aren’t always able to share specific interventions with staff.

The survey also found that less than 2% of respondents had been physically assaulted by another employee or healthcare provider. Less than one in ten (8%) reported experiencing sexual harassment, and 58% of those didn’t report the incident.

Nurses speak out about workplace bullying and violence

Survey respondents left a total of 1,323 comments about these contentious issues. Here’s a sampling.

Bullying and violence from patients and their families

The most common reasons for not reporting the incident were the belief that the incident wasn’t serious enough to report (51%) and that nothing would be done about the situation (40%). Of those who reported, only 56% were satisfied with how the situation was handled.

More than one-third (36%) of respondents say they had been verbally assaulted or bullied by a patient’s family member or visitor. Most (45%) reported the incident verbally.

Almost two in ten respondents (18%) report having been physically assaulted by a patient. Most (47%) made a verbal and written report, with 30% making only a verbal report. The most common reasons for not reporting were the belief that the incident wasn’t serious enough to report (50%) and that nothing would be done about the situation (40%). Of those who reported, only 48% were satisfied with how the situation was handled.

The survey also reveals that organizations are working to address these issues. Most respondents (78%) say their organizations have been supportive in reducing workplace violence. More than three-quarters (77%) have received or arranged for training in how to de-escalate patients, family members, or visitors who become agitated. Of those who have had training, 85% find the training helpful and 71% have applied the training in practice.

Nurses reveal what's most important to them

Respondents were asked to pick three aspects of nursing that are most important to them. The most popular responses were the following*:

Nurses added 215 additional responses, addressing such issues as patient and staff safety, having a voice and being heard, working at the top of scope of practice, feeling appreciated/valued, work-life balance, job security, opportunity to learn, and job satisfaction.