A guide for the times 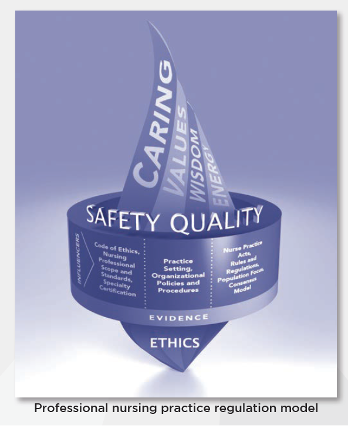 Each edition of the American Nurses Association’s (ANA’s) Nursing: Scope and Standards of Practice provides authoritative guidance on actions and behaviors all RNs are expected to perform competently, regardless of role, population, specialty, and setting. These documents—reviewed and updated every 5 years—also reflect the dynamic evolution of nursing practice. This is especially true for the 4th edition, which was issued in May 2021 during the COVID-19 pandemic and as society began awakening to the corrosive effects of systemic racism.

“In 2020 it was almost like a quilt was being unraveled and we had hold of this string in nursing. We would pull a little bit and every time we pulled there would be another thing to evaluate or address,” said Carol Peyton Bryant, DNP, RN, ACNP, CCRN, of the 17-member workgroup’s efforts. In 42 full workgroup meetings from August 2019 to November 2020 and in many other smaller sessions, the participants explored and debated some of the profession’s headiest challenges sinceANA’s first code for professional nurses was articulated in 1950.

The workgroup—a diverse panel of ANA member-volunteers with a broad range of professional experiences and ably guided by Carol Bickford, PhD, RN-BC, CPHIMS, FAMIA, FHIMSS, FAAN, senior policy advisor at ANA—already was rethinking a conventional update when the pandemic hit, exposing long-standing inequities and leading many nurses to reconsider their purpose and scope of practice. Months later, George Floyd’s death under the knee of a Minneapolis police officer sparked worldwide protests against racial injustice and deep reflection about how to achieve an equitable, just society.

In this atmosphere, the workgroup made notable changes and additions to the document, including a series of open-ended questions designed to encourage contemplation about current and future nursing practice across many domains. (See Reflections on practice.)

“We wanted people to deliberately think about what the future might be and how they could impact that future,” said Barbara Brunt, MA, MN, RN-BC, NE-BC, FABC, an Ohio Nurses Association member. “Everybody has the opportunity to initiate change, and by doing that they can change the future.”

The opening pages of the document present an updated definition of nursing with the addition of three key phrases. The revised definition notes that nursing “integrates the art and science of caring,” alleviates suffering through “compassionate presence,” and advocates in care “in recognition of the connection of all humanity.” The 2021 definition also favors “human functioning” over “abilities” in the context of nursing’s role in protecting, promoting, and optimizing health.

These phrases reflect not only the obvious—that caring is a core concept of nursing—but also more complex notions about the process and purpose of nursing. “Compassionate healing,” noted workgroup co-chair and ANA Massachusetts member Patricia Bartzak, DNP, RN, CMSRN, TNCC, ABLS, “is a bidirectional phenomenon. Meaning that as we provide presence, we can feel another’s presence. And in this moment, there’s a sharing of experience and energy.”

Bryant, an Arizona Nurses Association member, had in mind that the updated definition—presented both in paragraph and bullet forms—might be a source of inspiration at a tough moment. “I wanted to make sure in the middle of a night shift when it’s really bad and a nurse is about to quit but loves their job that they can recite one little thing,” she said. “To be able to reassure oneself, ‘Nursing is the art and science of caring.’ That’s what I said when I thought I couldn’t do the tasks at hand anymore.”

The case against passive acceptance

The participants also introduced a new standard 8, “Advocacy,” the inclusion of which “resulted from all the issues we were seeing around supplies and social justice because of the pandemic,” explained Colleen Quesnell, DNP, RN, WHNP-BC, ANP-BC, CNM, a member of the Minnesota Organization of Registered Nurses.

Speaking during a free Nurses Month webinar introducing the 4th edition, Bartzak described two scenarios that animated the workgroup’s deliberations about the Advocacy standard. One involved a patient who had sustained, mildly abnormal vital signs that were followed over many shifts but not acted on. The other entailed a nurse educator, who was obligated by school policy to give a student a zero on an assignment, which she had missed because she was participating in peaceful social justice protests.

Passive acceptance was at the heart of both vignettes, but in the second the nurse educator felt compelled to advocate for the student and sought an opportunity for discussion with the college on the matter.

“Advocacy has many faces, but it begins with the acknowledgement that passive acceptance must be addressed,” explained Bartzak. In the case of the nurse educator, she added, “Besides acknowledging passive acceptance, the notion of advocacy challenges the nurse to ask, ‘Is thinking so rigid that creative solutions can’t be explored?’”

The workgroup reimagined a more inclusive and contemporary standard 9, “Respectful and Equitable Practice,” from the 3rd edition’s standard 8, “Culturally Congruent Practice.” Speaking about it in the Nurses Month webinar, Katie Boston-Leary, PhD, MBA, MHA, RN, NEA-BC, director of nursing programs at ANA, said, “We propose a long-term learning investment to achieve deep cultural humility, which is an endless commitment to learning to inform and continuously reshape our world view.”\

The workgroup also introduced ANA’s first-ever practice model and revised the closely related model for regulating professional nurse practice. The practice model emanated from the participants’ interest in inscribing who nurses are and what nursing work entails, according to Bartzak. It’s depicted as a flame representing the inner light of nurses and nursing, with ethics at the base, caring and values grounding the profession on the left, and the wisdom and energy needed to practice on the right. The contributors would like future research to further validate and build upon this model, Bartzak added.

The revised professional nurse practice regulation model empowers nurses to define and manage their profession, according to workgroup co-chair Kahlil Demonbreun, DNP, RNC-OB, WHNP-BC, ANP-BC, FAAN, FAANP, who led the efforts to revise this model. “One of the best ways to be the owners of our practice is to be the regulators of our practice,” observed Demonbreun, a South Carolina Nurses Association member. “At a time when nurses seek greater voice, autonomy, and independence … it is vital to appreciate the regulatory factors impacting this evolution.” This updated paradigm features the practice model in the interior surrounded by a band of nine regulatory influencers, including the nursing code of ethics, organizational policies and procedures, and nurse practice acts. Safety, quality, and evidence bind these influencers.

• How will you self-educate so that you are empowered to plan, mitigate, and respond to local, community, and global threats?
• How are nurses in your practice setting actively involved in reducing costs and promoting cost-effective care?
• How can drones enhance healthcare beyond the delivery of COVID-19 testing kits to remote areas?
• How might residency and fellowship programs enable smoother practice and role transitions for nurses?

These are among the 25 questions the Nursing: Scope and Standards of Practice, 4th Edition poses across nine dimensions of practice, including disaster planning and management, structural competency, and aging in place. The 17-member workgroup that drafted the document developed these queries to encourage nurses to reflect on their current practice and the opportunities they might have now and in the future to innovate in providing care.

The authors also invited readers to share their ideas and feedback about the American Nurses Foundation’s Reimagining Nursing Initiative, which aims to elicit and assess practical, actionable ideas to transform nursing practice to improve healthcare access and outcomes for all Americans (nursingworld.org/foundation/programs/rninitiative).

As in previous editions of Nursing: Scope and Standards of Practice, the 4th edition delineates competencies for all RNs as well as those for graduate-level prepared nurses, including advanced practice RNs. The workgroup carefully considered how well these competencies correspond with current practice, and some, such as the Scholarly Inquiry standard (formerly Evidence-based Practice and Research), contemplate a more expansive role for RNs. “In the past, you had to have a graduate degree to do research,” said Brunt. “That’s not necessarily true now. A lot of [nurses with] BSNs are doing research and incorporating it into practice when initiating changes and improving quality.”

As the workgroup members deliberated the content of the 4th edition—including considering comments from 260 respondents on the draft—they realized that participating in this process had changed their own concepts of nursing and nursing practice. Suzanne Sikes-Thurman, BSN, RN, a Louisiana State Nurses Association member, captured the sentiments of several colleagues. “It was a lot of fun and a huge educational experience,” she said. “Working on this document reminded me that nursing is much bigger than the patients I take care of during my shift.”

—Genna Rollins is a writer-editor at ANA.

Nursing: Scope and Standards of Practice, 4th Edition, is available for purchase as a paperback or e-book at nursingworld.org/nurses-books/nursing-scope-and-standards-of-practice-4th-edit.
The webinar “Redefining nursing–reaffirming our practice: Introducing the Nursing Scope and Standards of Practice, Fourth Edition” is available for 3 years at anayearofthenurse.org/nurses-month-webinar; registration is required.
Facebook
Twitter
Pinterest
Linkedin
Email
Print
Previous articleDiabetic ketoacidosis and hyperglycemic hyperosmolar state
Next articleMyocarditis and COVID-19

What you may not know about primary care nursing practice

The Relentless School Nurse: Coming to terms with the era of COVID