A question of disclosure: RNs often struggle with revealing their health conditions to employers 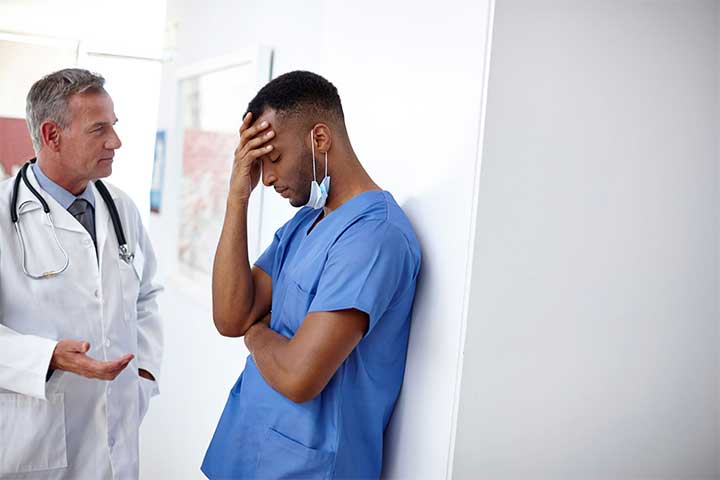 It’s no secret that Americans are living longer and that deaths from heart disease, stroke, and cancer are on the downswing. It’s also true that more people are living with chronic conditions, and that the number of medications to treat them is on the upswing.
Given that RNs are a subset of the American population, it stands to reason that an increasing number of working nurses have some type of chronic condition for which they are—or are not—being treated. But because of the nature of nursing, some RNs are fearful of disclosing personal health information that could end their employment or even their career.
“ANA routinely fields questions from nurses about what they must disclose to their employer about their health,” says Cynthia Haney, JD, a senior policy fellow in ANA’s Practice Department. “Usually nurses wonder whether they are obligated to notify a supervisor about prescribed pain medication or a psychotropic drug they’re taking.”
“Generally, they are afraid of losing their jobs if they disclose this information,” Haney says. “And what we’ve found is that there’s a wide range in employer policies on what nurses are obligated to disclose, whom to notify, and what steps employers might then take.
“What we tell nurses is that their No. 1 concern should be patient safety. If they are impaired in any way—whether it’s from using prescription or over-the-counter drugs, alcohol, or illegal substances, or even from fatigue—they must not practice until they can ensure safe care.”
However, Haney knows that nurses’ fear of losing their jobs—even if they are safe to practice—is a real issue. The Americans with Disabilities Act (ADA) of 1990, which offers worker protections, can’t always be counted on as a safety net. And how does the employers’ right to know mesh with the nurses’ right for healthcare privacy under the federal Health Insurance Portability and Accountability Act of 1996?

Muddy waters
“Very few cases are cut and dried,” says Donna Maheady, EdD, ARNP, an advocate for nurses and nursing students with disabilities. She recently shared this anecdote:
An RN in an advanced nursing program called seeking her advice. She recently experienced two seizures—perhaps linked to childhood head trauma and potentially brought on by lack of regular sleep. After neurologic tests showed no ongoing problem, her physician placed her on prophylactic antiseizure medication.
“In this situation, this nurse could probably function and do just fine,” says Maheady, a Florida Nurses Association member who oversees the online resource network, www.ExceptionalNurse.com. “She’d taken personal steps to ensure her safe practice—openly discussing her health status with her employer and colleagues and limiting her scheduled activities. She also had been seizure-free for some time. But although her employer and work colleagues had no issue with the RN coming back to work, the school program did—even though she eventually could work in areas where there is enough back-up personnel.
Hers is just one case in a sea of possibilities.
Diabetes, hypertension, pain, and mental illness are all chronic conditions on the rise, according to federal statistics. In 1999 to 2002, 37 percent of adults who reported pain said it lasted a year or more. The percentage of Americans using prescribed narcotics to relieve pain jumped by 30 percent between 1988 to 1994 and 1999 to 2002—with a significant portion of the increase attributable to use by white women over age 45, according to National Center for Health Statistics’ Health, United States, 2006 with Chartbook on Trends in the Health of Americans.
Not surprisingly, overall prescription medication use rises as people get older. In 1999 to 2002, 36 percent of 18 to 44 year olds used prescription medication in the previous month. Among those ages 45 to 64, that figure rose to 64 percent. “There also is a growing incidence of ‘presenteeism,’ where nurses come to work even when they don’t feel well and avoid taking medication for fear of its effect on their judgment,” says ANA senior policy fellow Patricia Rowell, PhD, RN, APRN, BC.

Overcoming stigma
Two highly stigmatized conditions are mental illness and addictions. “There’s speculation that more nurses are willing to accept a mental health diagnosis over a chemical dependency diagnosis,” says Art Zwerling, DNP, CRNA, DAAPM, a peer assistance committee adviser for the American Association of Nurse Anesthetists (AANA) and a Pennsylvania State Nurses Association member. Although about 60 percent of addiction disorders are influenced by genetics, the stressful conditions inherent in today’s RN workplaces cannot be overlooked as a contributor to chemical dependency among nurses, he says.
“We’re also seeing more and more folks—such as nurses, who are prone to back injuries—with chronic pain issues whose use of prescribed medications progresses to addiction,” Zwerling says. He and other nurses contend there is no question that nurses with ongoing chemical and alcohol dependencies are not safe to practice, but that these nurses need intervention and treatment that allows them to return to their jobs.
Zwerling is among the nurses and professional associations, such as ANA and its organizational affiliate, the International Nurses Society on Addictions, that have promoted a treatment-over-discipline approach regarding addictions and the recovery process. (For more information, go to ANA’s online “Impaired Nurses Resource Center” at www.NursingWorld.org/impaired/.)
“Looking more broadly, some nurses really want their health conditions closeted, even if they are compliant with their treatment regimen,” Zwerling says. “We need to get past our expectations around a diagnosis. We need to look at functionality. Are our interpersonal and cognitive skills intact? Can we provide safe care? We also should be promoting wellness among ourselves as nurses.” (AANA recently launched a wellness program for its members. For more information, go to www.aana.com.)
Even in some of the worse-case scenarios involving mental illness, people do get better, says Maheady, who includes a chapter on addressing mental illness and practice in her book, Leave No Nurse Behind.

Making accommodations
Since its enactment, the ADA has been a tool to protect nurses and others from discrimination in the workplace. Its vagueness regarding specific diagnoses and disabilities can be a help—and a hindrance—when nurses are trying to determine whether or not to disclose information about their health.
“However, if you want accommodations under the ADA, you must disclose a condition,” Maheady says. For example, if a nurse has chronic fatigue syndrome and wants a permanent day shift, that employee must reveal the condition and ultimately provide supporting documentation. (For more information on the ADA, go to www.eeoc.gov/facts/health_care_workers.html and www.jan.wvu.edu/media/Nurses.pdf.)
“When a state board receives a complaint about a nurse, the board must screen it to determine whether it provides grounds for discipline,” says Vickie Sheets, JD, RN, CAE, director of practice and regulation for the National Council of State Boards of Nursing (NCSBN).
“Generally, nurses do a good job of self-limiting their practice,” Sheets says. “But, they may not have the insight to realize that their condition is affecting their practice. If a complaint does come before them, boards usually look at the issue on a case-by-case basis. For example, did the nurse have a seizure out of the blue and is now being treated successfully. Or, should a nurse work on a less stressful unit if ‘hyper-stress’ is a seizure trigger.”
Some boards of nursing look at issues involving disabilities as part of the application for licensure process. Other boards license qualified applicants and nurses, giving them the opportunity to self-limit their practice and, if there is a reported concern, becoming involved through the disciplinary process, according to Sheets. NCSBN included language in its “Model Nursing Act and Rules” with ADA regulations in mind. One of NCSBN’s suggestions is that boards could provide a modified license for nurses—through a nondisciplinary process—who need to limit their scope of practice or who need accommodations.
Sheets also believes the safest approach for nurses is to be “upfront and open” with an employer, manager or, if the event arises, the state board. However, managers also are unsure of what to do. Laurie Badzek, JD, RN, LLM, director of ANA’s Center for Ethics and Human Rights, often receives questions from supervisors about whether they must report a nurse’s condition, such as insulin dependence, to a state board.
The answer to that varies like health conditions themselves, according to Badzek, a professor at West Virginia University School of Nursing. “Ultimately, each nurse is accountable for his or her own practice under ANA’s Code of Ethics for Nurses, and colleagues also are responsible for reporting nurses whom they believe to be impaired,” she says. “But chronic illness is a way of life nowadays, and given nurses’ average age, it’s a professional issue that needs to be addressed in a way that is fair and safe for all.”