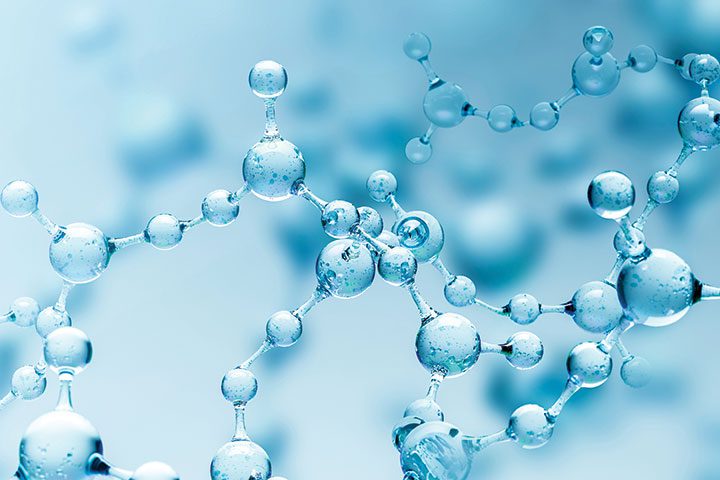 Extracorporeal membrane oxygenation (ECMO) is a life-saving treatment for many patients, including those with COVID-19. Here’s what you need to know to better care for these patients.

ECMO, a form of partial cardio­pulmonary bypass, provides either venoarterial (VA) or venovenous (VV) support. The ECMO circuit pumps venous blood outside of the body to an oxygenator, which removes carbon dioxide and adds oxygen before returning the blood to an artery or vein. VA configurations provide rest for the heart and lungs by returning oxygenated blood under pressure to an artery. VV configurations provide pulmonary support only, returning oxygenated blood to a vein.

How is a patient placed on ECMO?

Several cannulation methods, including peripheral and central, can be used to place a patient on ECMO.

Peripheral cannulation methods include the following:

Central cannulation requires a sternotomy or a thoracotomy and typically is used when a patient can’t be weaned off of cardiopulmonary bypass after cardiac surgery. In this case, the cannulas connect directly to the VA ECMO circuit. With central cannulation, a venous cannula is placed in the right atrium, and an arterial cannula in the ascending aorta. The larger diameter cannulas and decreased resistance permit higher flow.

Newer ECMO circuits are smaller and more portable, allowing successful deployment of the procedure in the field or outpatient settings with a properly trained staff. Previous bulky ECMO systems prevented these options.

What are the different types of ECMO?

VA ECMO (See Types of ECMO, A.) extracts deoxygenated blood from a cannula placed peripherally or centrally in a vein, pumps the blood through the circuit with an oxygenator, and returns the oxygenated blood to the arterial system. Typically, the femoral or internal jugular vein is used for the inflow (drainage) cannula, and the femoral, axillary, or carotid artery is used for the outflow (return) cannula. 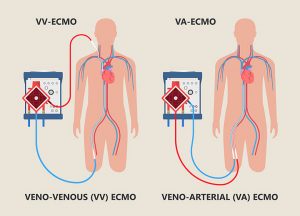 More complex cannulation options not discussed in this article are available. In addition, a patient can be placed on ECMO without being intubated and sedated, although it’s relatively uncommon.

How does the ECMO circuit operate?

How does gas exchange occur in the oxygenator?

A semipermeable membrane divides the oxygenator into a blood compartment and a gas compartment. The pump pushes venous blood into the oxygenator, where gas exchange occurs across the membrane as blood interacts with “fresh” gas. The patient’s blood flow rate (liters per minute, or how much blood will come into contact with the oxygenator each minute) through the ECMO circuit is determined by adjusting the centrifugal pump’s rotations per minute.

The blender allows for adjustment of the fraction of delivered oxygen in the sweep gas. Sweep gas rates (liters per minute) are proportionate to blood flow rates. An increase in sweep gas increases carbon dioxide elimination.

Based on diffusion principles, gas exchange occurs across the semipermeable membrane: oxygen infuses into the patient’s blood and carbon dioxide is swept off through the blender. The system returns oxygenated blood to either an artery or a vein, depending on the patient’s ECMO configuration. 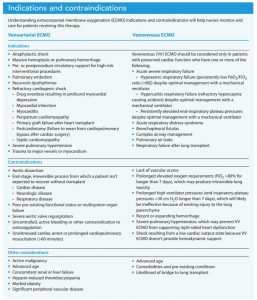 Can patients on ECMO ambulate?

Patients with certain ECMO configurations can move from the bed to the chair, use equipment such as the seated leg press machine, and ambulate. However, the interprofessional team must first evaluate the patient to determine the clinical appropriateness to engage in rehabilitative therapy. Because ECMO cannulas are wire-reinforced, they’re sturdy.

Some patients on ECMO might be required to demonstrate their strength by performing pre-designated physical activities to increase the likelihood that they’ll be approved for the transplant wait list. Many patients on VV ECMO who are candidates for lung transplantation have a dual-lumen cannula inserted into the internal jugular vein, which serves as the patient’s only cannulation site and enables patient mobility.

How long can a patient be on ECMO?

No absolute maximum or minimum time frame exists for ECMO. Therapy length is an interprofessional decision made on a case-to-case basis; however, according to the Extracorporeal Life Support Organization, the average length for VA ECMO is 5 to 10 days and 10 to 14 days for VV. Some patients may require therapy for more than 30 days. The team should consider the proposed patient outcomes before implementing ECMO. The therapy must be incorporated into a larger clinical plan of care and should serve as a bridge to recovery or long-term treatment such as implantable ventricular assist devices or transplant.

After a patient is placed on ECMO, they should be allowed to experience the therapy’s benefits for at least 24 hours before discussing discontinuation.

What are some of the major complications of ECMO?

Access issues usually occur during cannula placement when ECMO therapy is initiated. Although these issues most frequently occur with arterial cannulas, they also may be encountered with venous cannulas. Clinicians must understand the size of the vessel being cannulated, but emergent placement may prevent careful investigation to guide decisions. As a result, ischemia distal to the large cannulas may cause thrombosis and gangrene. Best practice calls for using a small reperfusion cannula to bypass the vessel area occupied by the ECMO cannula. The nurse must assess all cannulated extremities every hour (more often as needed) to evaluate for signs of ischemia, compartment syndrome, and vascular injury.

In patients peripherally cannulated for VA ECMO, oxygenated blood is returned in a retrograde fashion up the aorta. This forms a mixing cloud between blood returned by the ECMO circuit and blood ejected by the left ventricle. Blood from the ECMO circuit is richly oxygenated, but oxygenation of the native circulation depends on pulmonary gas exchange, which frequently is severely impaired. During the early stages of cardiogenic shock, the mixing cloud will occur at the aortic valve because of the patient’s severely impaired native cardiac output. If the left ventricle recovers, the location of the mixing cloud will move distally. If native pulmonary function remains impaired, poorly oxygenated blood will start to perfuse the upper body and coronary arteries. As deoxygenated blood is pushed through the left ventricle, hypoxemia results in the upper parts of the body. Nurses must assess the patient for cyanosis and implement lung optimization strategies, including protective mechanical ventilation and medication as prescribed.

Because ECMO involves continuous flow through plastic tubing as well as an oxygenator with a large surface area, many patients experience hematologic issues. For example, clotting can occur in the circuit and may manifest as cerebrovascular, renal, or splenic infarcts. In addition, bleeding can occur at the insertion sites, especially if insertion was traumatic. Anticoagulation can be achieved with short-acting agents such as heparin or direct thrombin inhibitors. Nurses should closely monitor patients for bleeding and clotting and take corrective measures as ordered.

Some medications may become sequestered in the circuit if they stick to the tubing. As a result, patients may require higher doses to achieve therapeutic benefits. Nurses should consult with the provider about possible dosage adjustments if the patient doesn’t seem to be responding to medications as expected.

The continuous flow centrifugal pump and retrograde arterial flow of VA ECMO may increase left ventricular afterload. Retrograde flow impedes distinct opening and closing of the aortic valve. Absence of pulsatility is especially common in patients with severe cardiogenic shock. When monitoring a patient on VA ECMO, nurses may observe an arterial line absent of pulsatility as evidenced by a flat waveform tracing without the presence of a dicrotic notch.

Absent or low pulsatility indicates decreased left ventricular stroke volume, leading to blood stasis and an increased risk of thrombus formation in the ventricle and around the aortic valve. Higher pulsatility indicates potential myocardial recovery during VA ECMO support. Nurses should monitor arterial waveforms for lack of pulsatility as an indication of a closed aortic valve and worsening myocardial function. This knowledge may help guide the team when prescribing I.V. positive inotropes or additional ventricular support along with concomitant intra-aortic balloon pump.

What’s the most important thing to remember when caring for a patient on ECMO?

The interprofessional team must remember that despite the daunting appearance of the ECMO circuit, the patient attached to it requires compassionate care. Never refer to the patient as the device. For example, don’t say, “the ECMO in bed nine.” Rather, remember that the patient in bed nine requires ECMO therapy. Everyone on the team, including nurses, must preserve the patient’s dignity and humanity during an exceptionally vulnerable time.