Healthcare workers experience more incidents of workplace violence compared to other professionals. A 2018 American Nurses Association (ANA) survey revealed that 62% of nurses have personally experienced physical and verbal abuse on the job. When nurses perceive their work environment as hostile and dangerous, morale decreases, job stress and absenteeism increase, and turnover rises.

Maintaining a healthy work environment requires that nurses have the skills, tools, and support to prevent and manage violent behavior. In response to increasing episodes of patient aggression toward the staff in the 400-bed medical units of our 1,500-bed academic medical center, the Prevention and Management of Disruptive Behavior Committee was created. Backed by our sponsors (the nursing director of medicine and vice president for psychiatry), this multidisciplinary committee implemented a collaborative strategy to manage aggression incidents by engaging frontline nurses as part of an interdisciplinary response team. We chose the title Behavioral Emergency Support Team (BEST) to emphasize a model of support. The team brings resources to a behavioral emergency but doesn’t take control of it.

Historically, we’ve relied on our Protective Services Department as the primary response strategy to behavioral incidents. This model regularly leads to effective short-term de-escalation of aggression, but we run the risk of not addressing the underlying clinical contributors to the behavior. When underlying causes of a patient’s agitation (for example, delirium onset) aren’t addressed, it’s likely to reoccur.

We turned to two of our medical units that have the highest number of patients with diagnoses frequently accompanied by aggressive behaviors. Nursing staff on these units are adept at working with behaviorally challenging populations, and the nursing leaders were invested in developing the BEST code project. Select charge nurses from these units were recruited to be trained as responders in the code team leader role during off-shift hours. (See BEST structure.) 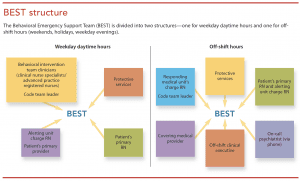 Charge nurses prepared for the code team leader role by participating in a 2.5-hour classroom session followed by 1.5 hours of BEST code simulations. The psychiatric CNSs developed the simulations and taught them in collaboration with the lead medical unit’s assistant patient services managers.

Two BEST code simulations were developed based on behavioral events commonly experienced on our medical units: a patient in alcohol withdrawal who becomes increasingly agitated and aggressive and an elderly patient with dementia who becomes agitated. A maximum of five nurses participated in the simulation (one in the code team leader role and the others in the role of patient’s nurse, charge nurse, and other unit nurses) in addition to a medical provider, protective services officers, patient actors, and observers who took notes to use during the debriefing. Participating in a second simulation after debriefing of the first gave everyone an opportunity to put into practice what they learned.

After the teams were trained, we announced their availability to all of the medical units. BEST code committee members spoke at nursing leadership and physician team meetings, and they attended each medical unit’s daily huddle to share information about this new resource. Discussion at protective service officers’ daily report to those beginning their shift focused on working collaboratively with the BEST team to intervene during behavioral emergencies.

To reinforce and supplement code team leader education during rollout, charge nurses attended weekday codes when BIT psychiatric CNSs and APRNs led the response to observe their leadership skills and therapeutic interventions. On off-shifts, we encouraged the responding nurse to invite another nurse from the unit

to attend and observe to learn how to run a code. To maintain momentum, we promoted and encouraged BEST code activation when needed. After some situations in which a code hadn’t been called, we might say, “That could have been a BEST code.” We also reminded staff in the moment to call codes.

Codes were tracked for nurse time spent at each event. When codes were called on off-shifts, assistant patient services managers on the lead medical units ensured a charge nurse responded, completed the event report form, and supported staff. Rapid cycle change methods were an important part of this evolving process and were used after every BEST code as part of the debriefing. The BIT psychiatric CNSs and lead medical units’ assistant patient services managers provided real-time education and feedback to staff, medical providers, and unit leadership.

Any staff member who perceives the need may activate a BEST code by calling the emergency operator system. Criteria for calling a code include imminent risk of a patient behaviorally acting out; behavior that’s dangerous to self, others, or the environment; and elopement attempts where the patient is confused, is on a physician’s emergency certificate (PEC), or has a Connecticut alcohol/ drug detox commitment certificate (CADAC). BEST code is not used for family or visitor behavioral emergencies.

All responders report to the BEST code location as quickly as possible where they participate in a pre-intervention huddle to develop a plan of action. (See BEST roles and responsibilities.) The team responds not only to the patient’s needs but also to staff and providers who may require support as well. When the emergent situation is resolved, the team huddles to determine a preventive plan for the future. The team leader facilitates debriefing with the group to review what went well and what opportunities exist for improvement.

Tracking comorbid behavioral diagnoses of BEST code patients helped us formulate prevention strategies. Of the 49 patients who had codes, 36 were experiencing cognitive impairment, most frequently dementia and/or delirium. Substance abuse/substance withdrawal was the second most frequent diagnosis (n = 20), followed by mood disorders (n = 14).

Verbal de-escalation was used during all codes and was by itself effective in 34% of cases. The addition of psychotropic medication was used in over 50% of the codes. Physical restraints were the least used intervention and were used only after physical aggression toward staff was unresponsive to other de-escalation attempts (n = 8). Examples of off-shift RN code team leader interventions included role modeling more effective forms of communication; facilitating an organized assessment and response to a chaotic situation; suggesting the use of available as needed psychotropics; and reminding/teaching about available resources, such as the on-call psychiatrist.

No patient or staff injuries occurred during the 64 incidents of behavioral escalation in which a BEST code was called. This result is significant because most of the codes were called when patients were already exhibiting verbal and/or physically aggressive behaviors.

Staff responses to the BEST codes have been overwhelmingly positive. Benefits cited by nurses, providers, and protective services officers include feeling supported when managing aggressive patient behavior, a heightened sense of safety, increased knowledge of psychiatric resources, decreased burnout, greater cohesiveness among units by supporting each other on off-shifts, and less restraint use.

Plans for the future include developing a BEST code medication kit, in which medications typically used during codes are stocked in the medication dispensing system used on patient care units; placing the event report form within the electronic health record; and formulating an algorithm to assist RN decision-making related to code activation. To minimize future behavioral events, we continue to identify and address staff education needs by analyzing BEST code debriefing findings. The BEST code demonstrates that a multidisciplinary team led by psychiatric and medical nurses proficient in de-escalation techniques can prevent violence and injury when patients act out.