Care during the pandemic 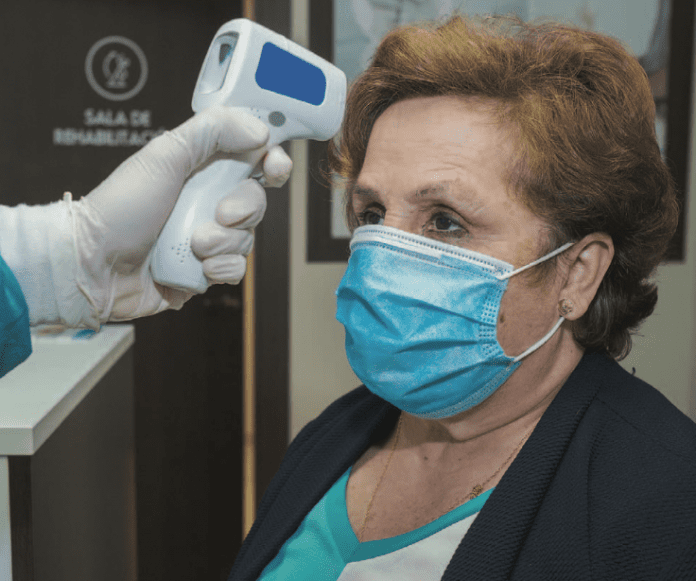 Nurses who are providing care to COVID-19 patients have found themselves increasingly drawing on their skills, emotional strength, and adaptability in the face of many challenges and uncertainties. And despite witnessing the loss of patients—and some falling ill themselves—they are willing to share their stories to shed light on the crisis and the meaningful, vital role of nurses.*

Amanda Foster, BSN, RN, said she felt called to help after seeing images on television coming out of New York City, then the epicenter of COVID-19 in the United States. It was mid-April and healthcare facilities and staff were overwhelmed.

“There was such a need, and I really felt for my fellow-nurses,” said Foster, secretary of the Arizona Nurses Association Board of Directors who, at the time, was finishing a nurse practitioner program. Within 48 hours, she had signed a 21-day crisis contract with a staffing agency and was on a plane with other nurses that landed at an eerily quiet LaGuardia Airport. The next morning, Foster boarded a chartered bus to go to her first assignment in a long-term care facility, a practice area outside her comfort zone of cardiac telemetry, stepdown, and ICU care.

In Washington state, Clint Wallace, BSN, RN, CCRN, already had been providing care to COVID-19 patients intermittently at Spokane’s Providence Sacred Heart Medical Center, which is one of 10 facilities nationwide that created a special pathogens treatment unit in response to the Ebola outbreak in 2014. His first COVID-19 patients, who arrived in mid-February, were four American passengers who had been airlifted from a quarantined cruise ship offshore of Yokohama, Japan. Shortly thereafter, residents from an area nursing home were admitted after an outbreak in that facility.

“I was anxious at first because there were so many unknowns,” said Wallace, a Washington State Nurses Association local officer who’s worked in the ICU for 20 years and who had agreed to staff the pathogens unit if a need arose. “I was concerned about a possible surge and worried that we would run out of PPE [personal protective equipment] very quickly if that happened.”

In Michigan, Nikeyia Davis, MBA-HCM, BSN, RN, CNN, found herself suddenly having to

adapt to using telehealth equipment to assess home dialysis patients, as well as providing even more emotional support to those who came to her outpatient clinic for their life-saving treatments.

Prior to the pandemic, she would go to patients’ residences to teach them how to perform peritoneal or home hemodialysis, as well as address their other health concerns. Then once a month, these patients would come in for a full assessment and lab work. Once cases began to rise in her community, Davis said that some patients were afraid to come in for monthly visits, while others didn’t want to use telehealth technology.

“There was a huge learning curve for doctors and nurses using telehealth,” said Davis, ANA-Michigan board secretary. “Nurses’ [telehealth] assessments for issues like fluid overload really had to be on point to make sure our patients were able to remain at home.”

ANA-Illinois member Amanda Buechel, BSN, RN, CCRN, volunteered to care for patients with COVID-19 being admitted to her Chicago-area hospital in mid-March. The first patients she saw were critically ill, needing ventilator support and other life-saving interventions.

“It was pretty unnerving,” said Buechel, who normally provides care to young, surgical trauma patients in her ICU. “These patients [with COVID-19] would come to the ER because they didn’t feel well. They were walking and talking, and then deteriorated within hours.” Because family members couldn’t accompany patients, nurses had to compassionately convey the COVID-19 diagnosis and treatment to the family, often using videoconferencing to bridge the communication gap. 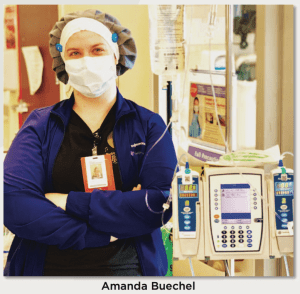 Also troubling, but necessary, were urgent conversations nurses had to have with patients who didn’t have advance directives.

“We’d have to talk with them about COVID-19, what could happen, and what they wanted to do regarding end-of-life interventions,” Buechel said. “They were scared. I’d also spend hours with family members using an iPad to show them I.V. drips and ventilators and try to interpret ‘medical speak’ so they would remain informed on a patient’s condition.”

Buechel said that, over time, she and nurses from many types of units were taking care of patients with COVID-19 who didn’t need ventilator support, but did need intense emotional support. “A patient would put the call light on at 2 am because he or she was having a hard time breathing and was scared,” she said. “Because a family member couldn’t be there, you had to be that person. Sometimes I would just sit in the room for hours, sweating under the PPE.”

Although successful patient discharges were celebrated with the playing of the “Rocky” movie theme, Buechel said nurses were still witnessing the agony of family members and patient deaths that were difficult to process.

Foster also spoke of catastrophic loss. When she arrived at the long-term care center in New York, the first thing she saw in the parking lot was a refrigerated truck.

“Residents who would be talking to you at the beginning of your shift would be gone by the end of your shift,” Foster said. “We’d lose one to two patients a shift.” She also found herself stretching her acute care skills and working with far fewer resources. For example, there were no I.V. pumps, so she had to calculate drip rates herself.

In her other assigned role, Foster worked at a corrections center—also outside her practice wheelhouse—where she performed physical assessments and screened detainees for COVID-19 before they were arraigned, incarcerated, or released. In both her long-term care and corrections role, she drew on her therapeutic communication skills.

“Some of the younger detainees immediately thought they were going to die if they tested positive,” Foster said. “I also spent a lot of time educating the NYPD and detainees, who didn’t know the signs and symptoms of COVID-19.”

Back in Spokane, Wallace said he felt comfortable both donning and doffing PPE because of his extensive training on it, as well as providing the intensive respiratory support his patients required. But he found it more challenging to interact with frightened patients and their families while he was wearing a powered air purifying respirator (PAPR). And he couldn’t offer patients the usual comforts available in a traditional ICU setting. Also, because PPE requests were being handled by the administration, he continued to worry about its supply.

Similar to other healthcare facilities across the nation, Davis’ outpatient dialysis clinic instituted temperature screening checks and other safety measures. “If someone tested positive, we sent them to a separate unit to be dialyzed,” Davis said. She also spoke of patient losses.

“When you work with patients with chronic conditions over 10, 15 years, you develop strong bonds,” she said. “So it’s very difficult for staff when they lose a life. And when patients who already are scared about getting COVID-19 come to the clinic and no longer see their ‘neighbor’ who sat next to them for years and who passed away from the virus, it’s really upsetting for them.”

In another setting, pediatric nurse Megan Piotrowski, MS, BSN, RN, performed testing to rule out COVID-19 and provided care to nonventilated patients at a Michigan hospital where she formerly worked before relocating to another state.

“The trajectory for kids that I’ve seen has been different from adults,” said Piotrowski, ANA-Michigan newly licensed board member. “They seem to recover much more quickly.” That said, they also can deteriorate faster, so she and other nurses were constantly monitoring fevers and any sign of shortness of breath.

Piotrowski also noted that children generally are frightened by the hospital environment, so nursing staff worked with child life specialists to develop age-appropriate strategies to allay fears, especially around seeing staff wearing PAPRs and other PPE.  “We would explain that PPE is extra stuff to keep them safe and have them put ‘gowns’ on a doll,” she said. And although protocols changed over time, at least one parent could stay with the child.

Piotrowski recently spoke with the staff of U.S. Sen. Gary Peters (D-MI) about his proposed “COVID-19 Heroes Fund,” which would provide pandemic premium pay to reward and retain essential frontline workers nationwide. “There’s already such high turnover and burnout in nursing because of stress,” Piotrowski said. “It’s important for all healthcare workers to feel valued, especially as they take on greater risks during this pandemic.”

She and Davis also spoke about how important it is to have support from colleagues. Both have attended online town halls held by ANA-Michigan, participated in online community groups, and relied on certain coworkers who could pull them up when they were feeling down.

“Positivity is contagious, and so is negativity,”  Piotrowski said. “Our choice every moment is to  decide what route to take. And I try to treat myself as I do my patients—I make sure I’m eating properly, getting enough sleep, and partaking in activities that I enjoy.”

Buechel currently is looking at strategies to address self-care and resiliency for nurses on her unit. “We immediately went into trauma season with no time to process what we went through with COVID-19,” she said. “A lot of us worked overtime, which can quickly lead to burnout. So you have to know your limits and say ‘no’ to that extra shift.”

Both Davis and Buechel also became ill from COVID-19, losing their senses of taste and smell and enduring high fevers, but fortunately neither needed to be hospitalized.

Buechel just started running again to ensure she maintains good lung capacity. A self-proclaimed “foodie,” Davis still can’t taste or smell fully, but she said that she shouldn’t complain. “But it’s mentally draining, and I still worry,” Davis said. “I’ve seen so many people pass away and I can’t help but think, ‘I survived. What makes me so special?’”

Foster, who tested positive and was quarantined but had no symptoms, feels another sort of guilt. “I felt I had done everything in my power to prevent contracting it,” said Foster, who now sees COVID-19 patients at an Arizona community clinic. “It weighed heavily on me that I could have transmitted [the virus] to my husband.”

And while nurses expressed gratitude for the support of their communities, they also spoke about the importance of promoting the use of masks by the public and providing them with accurate information.

Finally, Buechel said, “It’s really important for nurses to know they are making a difference.”

*Nurses were interviewed earlier this summer.

— Susan Trossman is a writer-editor at the
American Nurses Association.

The Well-Being Initiative offers free tools to support the mental health and resilience of nurses.