Nurses in various settings and practices must navigate the complex process of preventing and treating pressure ulcers. Support surfaces play a pivotal role in this process; clinicians use them to redistribute pressure, reduce shearing forces, and control heat and humidity. But with the variety of support surfaces available, ranging from basic to advanced pressure-management systems, how can we determine the best prevention or treatment option for each patient?

Empowering bedside staff with readily accessible tools reduces care delays and increases patient, nurse, and physician satisfaction. Although many wound, ostomy and continence (WOC) nurses leverage their knowledge and experience to select an appropriate support surface, until recently no tool existed to validate their decisions or to guide nonspecialty nurses in their selection. Without national guidelines for choosing support surfaces, reimbursement policies, local factors, or tradition have guided clinicians’ decisions.

Recognizing the need for standard guidelines, the Wound, Ostomy and Continence Nurses Society™ (WOCN®) set out to develop a system that enables nurses and other clinicians to easily determine the right surface for the right patient at the right time. Society leaders discussed several options to address the issue, ultimately opting to create an evidence- and consensus-based algorithm. Once the algorithm was developed, an online version was created for personal computers, tablets, and smartphones, so clinicians can assess patients quickly and easily on both personal and professional devices.

Creating an algorithm of this type is an intense process. To begin, the WOCN Society identified three experts to serve on a task force devoted solely to algorithm development. Given the vast amount of published academic literature on support surfaces (MEDLINE and CINAHL searches returned more than 1,300 references), the task force chose to recruit two methodologic experts to help synthesize existing evidence and link it to decisional steps essential to the algorithm. After a comprehensive review of the evidence, the task force developed a draft version of the algorithm and organized a consensus panel of 20 experts from across multiple practices and geographic locations.

The panel met for a 2-day conference that began with a presentation of task-force activities and a state-of-the-science presentation on support-surface selection. The task force then presented evidence-based statements and the draft algorithm; panel members made recommendations and suggested modifications for clarity. After the conference ended, the algorithm underwent a thorough content validation process.

The task force published its findings and the final version of the algorithm in the Journal of Wound, Ostomy and Continence Nursing. However, the printed algorithm version has limited value to bedside nurses unless they carry a hard copy with them during their shift.

So while awaiting algorithm publication, the task force enlisted WOCN Society staff to translate the algorithm into an easy-to-use, readily accessible tool for clinicians. Staff developed an online version accessible on personal computers, tablets, and smartphones. You can view the algorithm at algorithm.wocn.org; see the box below for a sample.

The task force presented the algorithm at the WOCN Society’s 47th Annual Conference, and through various simulations gave conference attendees guidance on how to incorporate it
directly into several practice settings. The WOC community already has embraced the online algorithm and incorporated it into their practices. Several thousand nurses have accessed it since its release in March 2015. The WOCN Society and the algorithm development task force hope the nursing community will benefit from the algorithm and use it to provide optimal patient care. 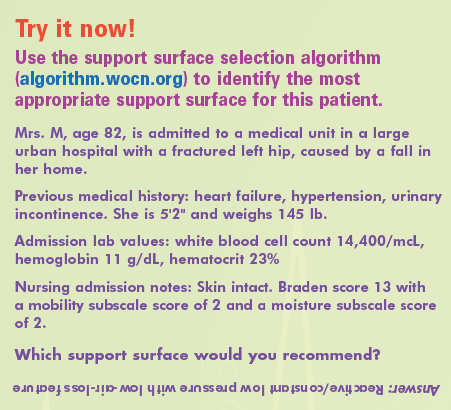 Laurie McNichol is a clinical nurse specialist and WOC nurse at Cone Health/Wesley Long Hospital in Greensboro, North Carolina. Carolyn Watts is a senior associate in surgery, a clinical nurse specialist, and a WOC nurse at Vanderbilt University Medical Center in Nashville, Tennessee. Dianne Mackey is a staff educator and chair of the National Wound Management Sourcing and Standards Team at Kaiser Permanente in California. Mikel Gray is a professor and nurse practitioner in the department of urology and school of nursing at the University of Virginia Health Sciences Center in Charlottesville. Christopher Carchidi is a marketing and public relations director at the WOCN Society.

Read the next article: Implementing a mobility program for ICU patients
Click to view the infographic

You’ve been selected to serve on a nursing council: Now what?

Tragedy from a vaccine-preventable disease

June 23, 2022
A research team out of Poland recently undertook a comprehensive examination of published data to determine the role that vitamins and diet might play...