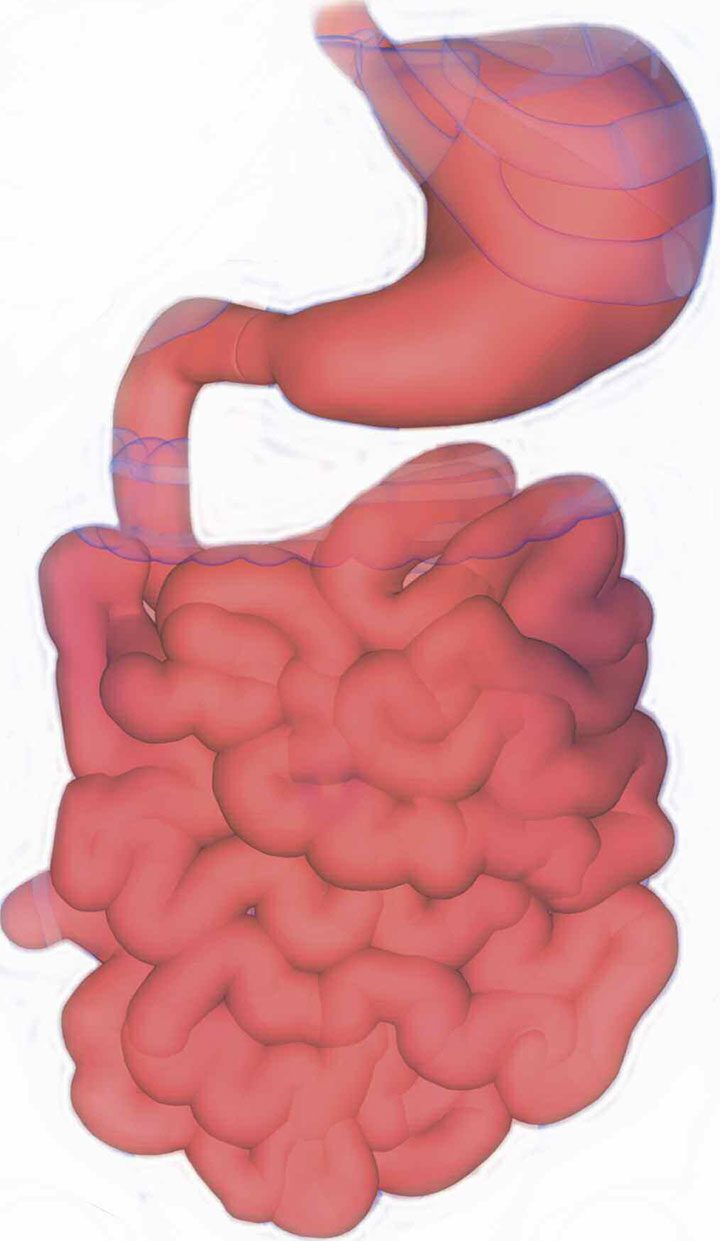 Learn how to identify and manage this under-recognized syndrome. 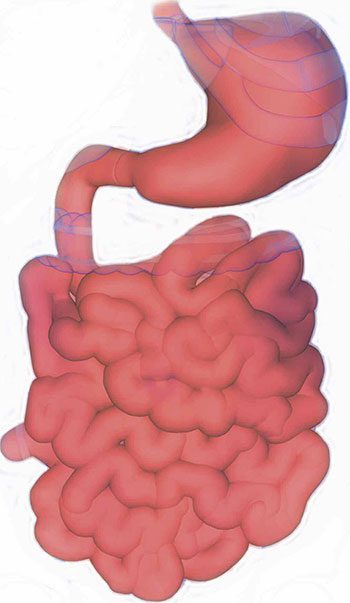 Dumping syndrome (DS), a well-established yet under-recognized side effect of upper GI surgery, occurs when the body reacts to food moving too rapidly from the stomach into the intestine, resulting in unpleasant symptoms such as a pounding pulse, sweating, dizziness, and nausea. DS was first described in 1913 as a complication after a gastroenterostomy; the term “dumping” was coined in 1920 when a physician attempted to describe the rapid gastric emptying he saw during a radiographic observation.

DS occurs after 20% to 75% of all esophageal and gastric surgeries. Its incidence decreased during the 20th century when the discovery of Helicobacter pylori made most gastric surgical interventions to treat chronic gastritis and peptic ulcer disease unnecessary and treatment shifted to medication. But the recent increase in bariatric surgery and gastric or esophageal surgery to treat cancer has led to an increase in the incidence of DS.

Many people who have undergone upper GI surgery aren’t aware of DS and haven’t been adequately educated about it. In addition, DS symptoms frequently are misdiagnosed. Nurses and other healthcare providers should understand the etiology, symptoms, and management of DS to educate patients and to improve their health outcomes and quality of life. 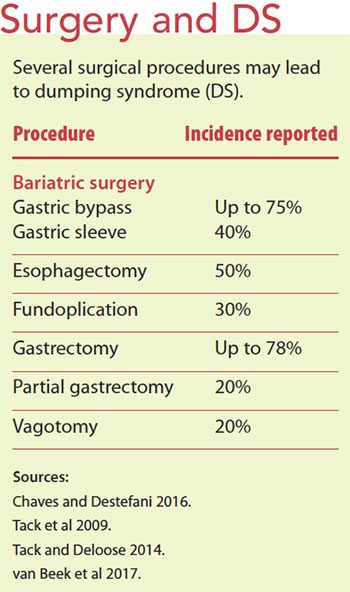 DS is a cluster of symptoms that can occur when undigested food moves too quickly into the intestines. The symptoms typically occur after eating a large amount of food or a high-carbohydrate, high-fat meal. It’s most frequently associated with gastric, esophageal, and bari­atric surgeries. The incidence and severity of postsurgical DS corresponds to the type of surgery performed. (See Surgery and DS.) DS also has been reported in patients with diabetes, cyclic vomiting syndrome, and Zollinger-Ellison syndrome. DS can occur after a bolus tube feeding, especially if the formula is high osmolality or a feeding is given in large amounts over a short time.

DS clinical manifestations are categorized as either early or late, depending on how soon they begin after a meal. (See DS symptoms.) Early dumping, experienced by about 75% of those who report symptoms, occurs within 10 to 30 minutes after eating. Symptoms arise when the undigested food moves too quickly into the duodenum, causing fluid to shift from the surrounding tissues into the intestine to aid in the rapid dilution of the concentrated food. This rapid fluid shift leads to GI symptoms, such as bloat­ing, abdominal pain, and nausea. The movement of fluid into the intestine is associated with excessive intravascular fluid loss, resulting in vasomotor symptoms, including diaphoresis, tachycardia, hypotension, and, in some cases, syncope.

Late dumping, which occurs in about 25% of patients, typically pre­sents within 1 to 3 hours after eating. The rapid movement of carbohydrates into the intestine releases an excessive amount of insulin from the pancreas in an attempt to maintain normoglycemia, but ultimately resulting in hypoglycemia. The subsequent symptoms are a direct consequence of the hyperinsulinemic response: fatigue, difficulty concentrating, hunger, confusion, perspiration, tremors, and low blood glucose. Most people who experience late dumping also exhibit early dumping symptoms.

Another factor that may play a role in the pathophysiology of both early and late dumping is increased secretion of GI hormones, although their exact mechanism is unclear. Hor­mones such as enteroglucagon, peptide YY, and glucagon-like peptide 1 are suspected to cause irregular GI motility, hemodynamic responses, and increased insulin release.

DS isn’t life-threatening, but persistent symptoms can be alarming and cause physiologic and psychologic concerns. Severe dumping can be a precursor to several complications, including malnutrition and weight loss due to nutrient malabsorption and chronic diarrhea. DS also can lead to social impairments and persistent lethargy because of inadequate nutrition.

How is DS diagnosed?

Many patients with DS have symptoms similar to irritable bowel syndrome or gastroparesis (delayed gastric emptying), which can result in misdiagnosis. Unless the patient reports a history of upper GI surgery, the healthcare provider may have difficulty distinguishing between many of the GI disorders. Diagnosis typically is based on clinical manifestations and the timing of the symptoms, although a few diagnostic tools can be helpful.

The Sigstad scoring system was developed in 1970 to aid in the diagnosis of DS. (See Sigstad scoring system.) The patient circles the symp­toms he or she has experienced and corresponding points are assigned. A score above 7 indicates DS; a score less than 4 may suggest a different diagnosis, such inflammatory bowel disease, celiac disease, or bowel obstruction.

For the modified oral glucose tolerance test, the patient fasts for 10 hours, then drinks a solution containing 50 g of glucose. His or her glucose level, heart rate, blood pressure, and hematocrit are measured every 30 minutes. A diagnosis of early DS is made if within 30 to 60 minutes the patient experiences a 10 beats/minute heart rate increase or the hematocrit rises 3% in the first 30 minutes. Late dumping is suspected if hypoglycemia occurs 2 to 3 hours after glucose ingestion.

Patients undergoing gastric emptying scintigraphy eat a bland meal containing a small amount of radioactive dye. An abdominal x-ray is then taken every hour for 4 hours after the meal to follow the movement of the dye and measure the rate of gastric emptying. DS is diagnosed if an accelerated rate of emptying is noted.

The Dumping Symptom Rating Scale questionnaire is reliable for detecting the severity and frequency of dumping symptoms. It uses a 7-point Likert scale to grade the severity of 11 DS symptoms along with three questions about foods that may cause symptoms.

How is DS managed?

Diet is the most effective way to manage DS. Patient education is particularly beneficial for people with mild to moderate DS symptoms because they respond well to dietary changes; those with more severe DS symptoms may not respond well to dietary changes alone. General recommendations include eating small, frequent, high-protein meals and snacks; avoiding liquids with meals; avoiding simple carbohydrates (cookies, candy, sweetened drinks, and ice cream); and lying down for 15 minutes after eating. People with DS should maintain a food journal that includes what they eat, when they eat, and the timing and nature of their DS symptoms. The journal can help identify foods that may trigger or exacerbate their symptoms so that patients can avoid those foods. (See Patient education tips.) 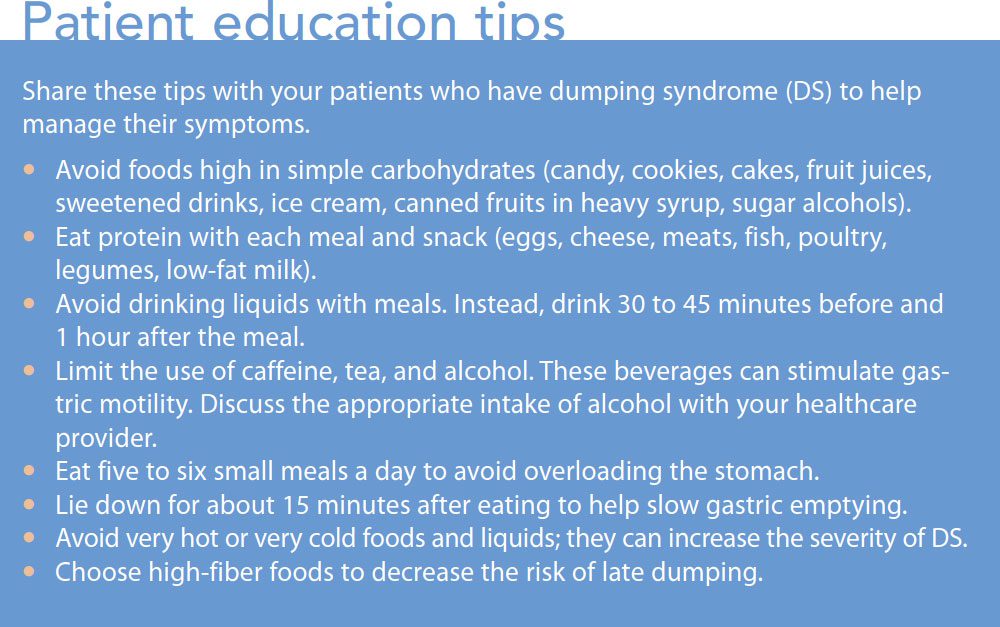 If dietary modifications are ineffective, pharmacologic interventions are the next step. (See Pharmacologic interventions.) Acarbose, typically prescribed for type 2 diabetes, is the recommended initial pharmacologic treatment for DS. To slow the digestion of carbohydrates and aid in maintaining normal blood glucose, patients are prescribed 50 to 100 mg three times a day; however, some people can’t tolerate the GI side effects, which include flatulence, abdominal discomfort, and diarrhea. 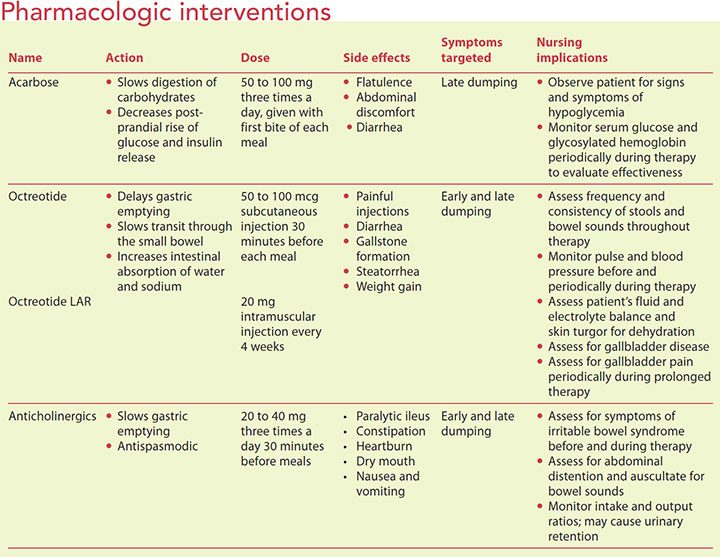 Octreotide has been shown to improve both early and late dumping. It’s administered by injecting 50 to 100 micrograms subcutaneously three to four times a day, 30 minutes before each meal. It causes a delay in gastric emptying, resulting in a smaller amount of food entering the intestine at one time. Octreotide also is available as a long-acting formulation that’s injected intramuscularly every 4 weeks. Although the long-acting 20-mg dose has been shown to decrease DS symptoms, increase compliance, and improve patient quality of life compared to the three-times daily dose, it’s not as effective at improving hypoglycemia. Side effects include painful injections, weight gain, steatorrhea (excess fat in the feces), and gallstone formation. In addition, octreotide is significantly more expensive than other DS treatments.

Over-the-counter products can be used to manage the severity of DS symptoms, such as diarrhea, nausea, or bloating. These medi­cations also have side effects that may be troublesome.

As a last resort, surgical intervention may be necessary for DS sufferers who have been compliant with dietary or pharmacologic therapy for at least 1 year but continue to be troubled by their symptoms. Several surgical procedures have been deemed somewhat successful in treating DS, but they aren’t always curative.

The choice of surgical intervention depends on what precipitated the patient’s symptoms. For example, a pyloric reconstruction may be used for patients who previously underwent a pyloroplasty (procedure to widen the opening in the lower part of the stomach [pylorus] to allow for increased emptying into the small intestine). Roux-en-Y, a bariatric procedure, is an option for patients whose DS began after a partial gastrectomy. Patients with unmanageable symptoms may undergo placement of a continuous enteral jejunostomy feeding tube to completely bypass the upper-GI system. This invasive procedure may impair the patient’s quality of life.

Nurses play a unique role in the education of patients, ensuring that they understand their condition and its treatments. Primary interventions for patients with DS include teaching them how to maintain a symptom journal, providing dietary instruction, and promoting self-management. Stress the importance of learning what foods trigger or aggravate their symptoms because patient self-management has been shown to be the best approach to controlling early and late dumping.

Some patients may experience DS symptoms while receiving care in a hospital or clinic. Your responsibilities in these settings depend on the type of dumping. Patients who are experiencing early dumping should be placed in the low Fowler’s position for 20 to 30 minutes after a meal to help delay gastric emptying and minimize symptoms. If the patient is exhibiting symptoms of late dumping, give him or her a small amount of fast-acting carbohydrates, such as fruit juice or regular soda; symptoms typically subside 10 to 15 minutes after consumption. Warn patients that they’re at risk of falling if they feel dizzy, weak, or lightheaded and need to rush to the bathroom. To avoid DS symptoms after a tube feeding, ensure that the formula is at room temperature, instill the feeding slowly or via continuous I.V. drip, and keep the patient in semi Fowler’s position for 1 hour after the feeding.

Many patients who’ve had esoph­ageal or gastric surgery or other med­­ical conditions that cause rapid emptying of the stomach may not be aware of DS, but they’re experiencing the symptoms. Nurses and other healthcare providers must be mindful of the conditions that may lead to DS and its symptoms to properly educate patients. Regardless of the healthcare setting, nurses should be able to assess the needs of patients with DS, provide general recommendations, and, if necessary, make a referral to a dietitian or healthcare provider who can offer individual assistance with dietary or medical treatments.