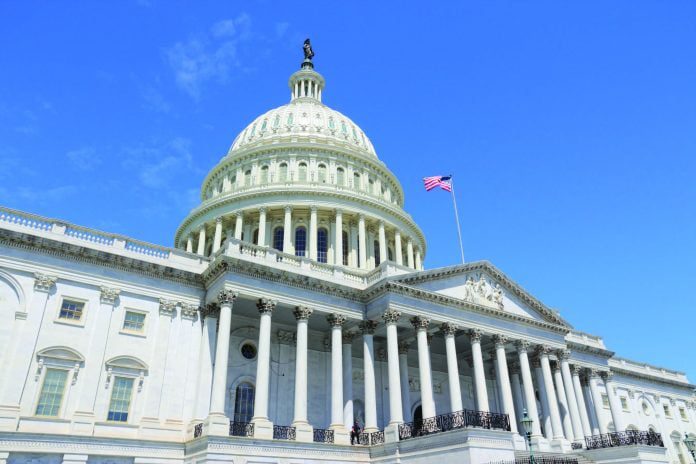 Promoting the critical role nurses play in the health of patients and the nation, as well as guaranteeing a strong nursing workforce into the future, are core components of the American Nurses Association’s (ANA’s) federal legislative agenda. In 2020, as the second session of the 116th Congress gets underway, ANA is focusing its legislative efforts in key areas: passage of Title VIII reauthorization for nursing workforce programs, preventing workplace violence, defending the scope of practice of registered nurses (RNs) and advanced practice RNs (APRNs), helping to curb the opioid epidemic, and preventing gun violence. These legislative priorities are based on ANA’s strategic goals, positions, emerging issues, and the current political environment.

Election years are always tough for legislative and policy victories, especially during a presidential election year. Members of Congress will spend more time at home campaigning for reelection, while hearings and committee work will essentially shut down from July until the election. The House impeachment of the President and Senate trial will have an impact on what gets accomplished by Congress for the remainder of the year. Although no one can predict what will happen after the elections in November, ANA will remain nimble in its efforts to promote nursing.

ANA’s 2020 legislative priorities include the following. 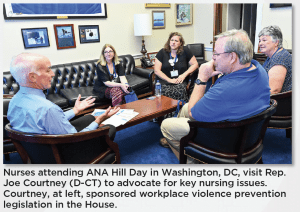 Title VIII of the Public Health Service Act authorizes Nursing Workforce Development Programs, which support RN and APRN education and training programs across the country. The House passed the Title VIII Nursing Workforce Reauthorization Act of 2019 (H.R. 728/S. 1399) on October 28, 2019, by voice vote. The Senate Health, Education, Labor, and Pensions (HELP) Committee passed the legislation out of committee in November, meaning the next hurdle is a vote on the Senate floor. But because an amendment was made during the legislative markup in HELP, the House will once again have to pass the bill or amend it and send it back to the Senate. At press time, ANA was expecting action on this measure.

One in four nurses are assaulted on the job, which is why preventing workplace violence continues to be a top priority for ANA. In 2019, ANA members helped the House pass the Workplace Violence Prevention for Health Care and Social Service Workers Act (H.R. 1309/S. 851). This bill requires the Department of Labor (DOL) to promulgate an occupational safety and health standard that requires employers in healthcare and social services settings to implement comprehensive plans to protect their employees from workplace violence. DOL has had voluntary guidelines on the record for years, but no enforcement mechanisms to make employers in these settings comply. ANA will continue to push for passage of this legislation in the Senate in 2020. 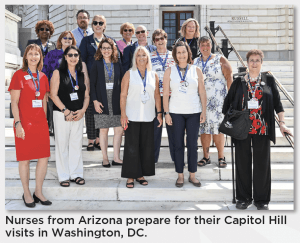 The SUPPORT for Patients and Communities Act of 2018 included a provision that granted nurse practitioners and physician assistants permanent prescriptive authority for buprenorphine; clinical nurse specialists (CNSs), certified nurse-midwives (CNMs), and certified registered nurse anesthetists (CRNAs) were given 5-year authority. As of January, more than 18,000 APRNs have completed the continuing education requirements to be granted the waiver to prescribe buprenorphine for addiction treatment. While this is great progress, it’s not a silver bullet to solving the opioid crisis. All prescribers with a controlled substance license can already prescribe buprenorphine for pain, but not for addiction treatment. ANA has endorsed the Mainstreaming Addiction Treatment Act (H.R. 2482/S. 2074), which will remove the requirement for additional continuing education to be able to provide medication-assisted treatment to patients with opioid use disorder. It also will eliminate the sunsetting of CNS, CNM, and CRNA authority to prescribe buprenorphine. 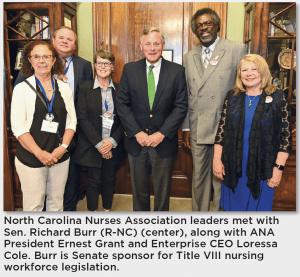 ANA achieved another long-term goal in 2019 in the appropriations process: For the first time since 1996, Congress appropriated money to the Centers for Disease Control and Prevention (CDC) and the NIH to study gun violence. Congress has been unwilling or unable to provide such funding since 1996, when a policy rider, known as the Dickey Amendment, was attached to the annual federal spending bill. This rider stated that none of the funds made available for injury prevention and control at the CDC may be used to advocate or promote gun control. The actual law didn’t specifically ban CDC and NIH from researching gun violence. However, career employees feared if they continued to direct money to research the issue, Congress might cut their overall funding, so they discontinued the programs. In 2018, Congress amended the law to clarify that such research is allowed, and this year added funding for it in the latest appropriations package.

Another achievement on behalf of nurses was the passage of H.R. 8, the Bipartisan Background Checks Act of 2019. Endorsed by ANA, this legislation prevents firearm sales between private parties unless a licensed gun dealer conducts a background check. We’re proud of the progress made, but it’s unlikely to get a vote in the Senate, and President Trump has said he would veto the bill if it passed Congress. ANA will continue to advocate for funding for the CDC and NIH for research into gun violence prevention and for other common-sense legislation to protect all Americans, including universal background checks.

ANA strives to ensure that nurses, the most honest and ethical profession for the past 18 years, are represented on critical issues facing the profession and healthcare. Through legislative efforts in 2020, ANA will continue to advocate on behalf of nurses and the patients they serve, and to elevate the role of nursing in America’s healthcare system.

— Gregory Craig is a senior health policy advisor and
Samuel Hewitt is a senior associate director in the
Policy & Government Affairs Department at ANA.

Capitol Beat Blog—Stay up to date on the latest healthcare policy and advocacy. Visit anacapitolbeat.org

#NursesVote—ANA empowers nurses across the country to become engaged advocates. #NursesVote is your go-to resource for information on candidates, ANA’s nursing priorities, and how best to engage with and support the candidate of your choice. ANA encourages all nurse advocates to become well-informed voters and help ensure every presidential candidate considers advancing the nursing profession to be one of their core priorities. Visit nursesvote.org

Our nursing careers can take many paths, but programs such as the American Nurses Foundation and United Health Foundation Jeannine Rivet Leadership Award create...
Read more
ANA on the Frontline

ANA Enterprise brings APRN resources to the fore The ANA Enterprise offers a rich menu of content for the nation’s 460,000 advanced practice RNs (APRNs)....
Read more
ANA on the Frontline