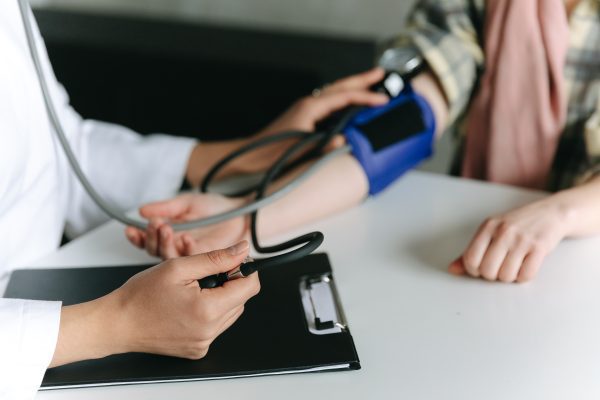 One morning, Linda Easterly, MS, RN, woke up and discovered she couldn’t move her left side. After undergoing numerous diagnostic tests, Easterly learned that, at age 42, she had suffered a stroke caused by a previously undiagnosed rare clotting disorder. “The moral of the story,” says Easterly, “is that sometimes you just don’t know what may be going on in your body.”
But there is another important point to Easterly’s story, and one of the main reasons she is so willing to share her experience with others. It centers on preventive care. “My stroke was not caused by hypertension,” she says. “I’ve always exercised, eaten right, and checked my blood pressure routinely. But I truly believe it was my healthy lifestyle that allowed me to work so hard in rehab and to recover 100%. Within 3 months, I was able to go backpacking and climbing on the Appalachian Trail.”

Easterly, president of the Georgia Nurses Association (GNA), is one of many RNs around the nation who’ve participated in ANA’s ongoing campaign to build awareness about the importance of knowing one’s blood pressure. And although February is American Heart Month, ANA wants nurses and consumers to focus on maintaining a healthy blood pressure year round.

“I tend to think of hypertension as a stepchild to the other risk factors affecting cardiovascular health,” says Joanna Sikkema, MSN, RN, ARNP, president-elect of the Preventive Cardiovascular Nurses Association (PCNA) and a Florida Nurses Association member. “The media generally focus on tobacco use, cholesterol, or diabetes and their link to cardiovascular disease. You don’t hear a lot about hypertension. Yet, it’s one of the easiest conditions to manage, treat, and modify with lifestyle changes.”

And as nurses know, hypertension often takes its toll on people’s health without them knowing it. According to the American Heart Association (AHA), cardiovascular diseases are the nation’s #1 killer, and nearly one in three adults in the United States has high blood pressure.

There are other troubling statistics, according to Cheryl Dennison, PhD, CRNP, an assistant professor at Johns Hopkins University School of Nursing in Baltimore. About 30% of U.S. adults are unaware they have high blood pressure, and only about one-third of individuals being treated have their blood pressure under control, says Dennison, a Maryland Nurses Association member. Given the high incidence of obesity, sedentary lifestyle, and other hypertension risk factors among the population, including children, the number of people with hypertension seems poised to grow exponentially if left unchecked.

Past, present, and future
Novartis Pharmaceuticals kicked off its “Take Action for Healthy Blood Pressure” campaign with ANA as a strategic partner in spring 2004. As part of the campaign, ANA initially conducted an educational session for RNs about the extent of undiagnosed hypertension in this country and provided information about the updated, more stringent blood pressure guidelines.

The National Heart, Lung, and Blood Institute released the guidelines in its Seventh Report of the Joint National Committee on Prevention, Detection, Evaluation and Treatment of High Blood Pressure (JNC 7). Normal blood pressure for most adults is now defined as less than 120/80 mm Hg. Adults with a systolic pressure between 120 and 139 mm Hg or a diastolic between 80 and 89 mm Hg are now considered prehypertensive and need to modify their lifestyles to prevent cardiovascular disease. Furthermore, persons with a blood pressure of 140/90 mm Hg or higher may need to take prescription medication in addition to making lifestyle changes.

Also as part of the campaign, ANA embarked on a 10-city national bus tour to reach consumers directly. Sikkema and nurse volunteers from ANA’s constituent member associations (CMAs) held blood pressure screenings, where they educated people about their blood pressure readings, instructed them on ways to control hypertension, and provided referrals to local healthcare providers.

Easterly says that in Atlanta, one of the bus tour stops, GNA nurses saw about 375 people, including one person with a dangerously high blood pressure whom they sent to the emergency department. Nurses in other cities reported similar numbers and findings; they identified a number of young people with high blood pressure and educated them about its consequences.

Now ANA is planning to reach more nurses and consumers through a series of educational materials beyond those available on its website at www.healthybloodpressure.org. The materials would be disseminated through CMAs and support their community outreach activities. One of the products is an online continuing education program, “New Goals for Healthy Blood Pressure,” developed by Dennison. The course will be available at ANA’s website, www.nursingworld.org, as an independent study for contact hour credit.

Sikkema adds that PCNA, an organizational affiliate of ANA, just published a pocket guide for nurses that includes the JNC 7 guidelines; for more information, visit www.pcna.net. Furthermore, AHA recently launched a program that helps hospitals ensure they are consistently treating heart and stroke patients according to the current guidelines; for details, visit www.americanheart.org.

A natural role for nurses
Nurse leaders believe RNs have a natural—and vital—role in addressing hypertension in this country. “Blood pressure measurement is such a basic test,” Easterly says. “It doesn’t hurt physically, even if it’s taken 20 times in one day. What many people perceive as hurting them, however, are the lifestyle changes that may be needed if hypertension or prehypertension is diagnosed.”

“As nurses, we have the knowledge and the trust of patients to help them see the benefits of making lifestyle changes, such as healthier dietary habits and regular exercise, versus the possibility of having a stroke or heart attack. We can show them how very, very important it is for them to know their numbers.”

Sikkema notes that RNs have an incredible reach. “Nurses come into contact with people from all walks of life—in their communities and in all kinds of health care settings,” Sikkema says. “We are perfectly positioned to identify hypertension and counsel people to manage it.”
Dennison adds that while patients often are seen for clinical reasons other than hypertension, blood pressure is a vital sign that is routinely checked. “With each health care visit, nurses can use that opportunity to reinforce blood pressure management counseling, as well as help patients develop a plan that reduces barriers to achieving blood pressure control,” she says.
To that end, the second phase of ANA’s healthy blood pressure campaign is designed to give nurses the updated information and tools they need to work effectively with patients and the public.

Sikkema, a member of ANA’s Congress on Nursing Practice and Economics, also sees ANA as well positioned to lead the nursing community in this national public health effort. In addition to its connections with CMAs, ANA brings together nurses from many nursing specialty groups who can help relay potentially life-saving information to their patient populations, she says. Sikkema hopes the campaign will have yet another benefit: raising awareness among nurses themselves to know their own blood pressure numbers and take steps to become or remain healthy.

Finally, ANA President Rebecca M. Patton, MSN, RN, CNOR, states, “Nursing has always been about health promotion. So I encourage all nurses to learn about the guidelines, stay on top of the research, and work with their CMAs to get our message out about maintaining a healthy blood pressure. Together, we can start to turn this health care crisis around.”
For updated information on the campaign, go to www.nursingworld.org and read upcoming issues of The American Nurse.