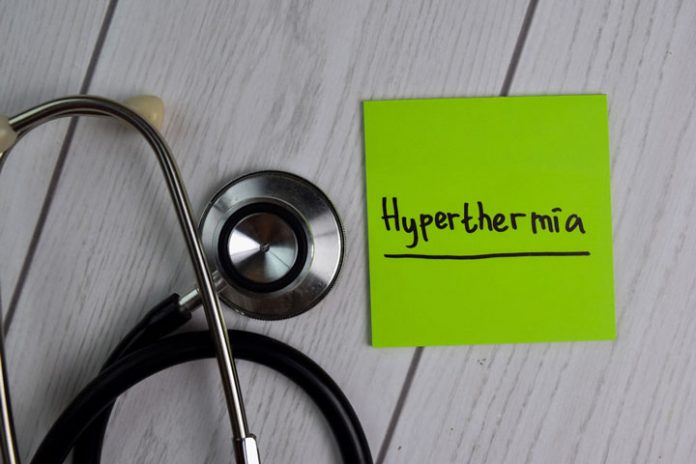 Nate Martin*, an 8-year-old boy, is admitted for a full-mouth dental restoration under general anesthesia. His parents report no family history of anesthesia or surgical issues. Nate was given midazolam 20 minutes before the procedure to reduce anxiety.

The dentist stops the surgery, and Meg brings the MH cart into the OR. Nate’s temperature is 102.9° (39.4°C), so Meg switches the lower body warmer unit to a cooling mode and applies ice packs to his groin and axilla. Andrew discontinues sevoflurane and flushes the anesthesia circuit with hyperventilation of 100% oxygen. He starts a propofol infusion to maintain general anesthesia while Nate receives MH treatment. Andrew starts a second I.V. as Meg prepares dantrolene by diluting the powder with sterile water. Andrew administers dantrolene 2.5 mg/kg.

ABGs and serum potassium levels reveal hyperkalemia and acidosis, which are treated with calcium gluconate, glucose-insulin, and bicarbonate. Meg inserts a urinary catheter and increases the normal saline infusion to 75 mL/hour to maintain Nate’s urine output at >1 mL/kg/hr. Within 30 minutes, his ETCO2 decreases to 39 mmHg and his HR drops to 90 bpm.

Nate is transferred to the ICU where he’s monitored for myoglobinuria and disseminated intravascular coagulation. He recovers quickly and is discharged home on day 4 with an order for a follow-up caffeine-halothane contracture test, used to diagnose MH.

MH is a genetic life-threatening disease of the musculoskeletal system. A mutation on the ryanodine receptor results in uncontrolled release of calcium, triggering a hypermetabolic state. Almost all MH signs and symptoms occur only after exposure to volatile anesthetic agents or succinylcholine. MH can occur anytime during general anesthesia or during the first 12 hours after the procedure.

The discharge nurse tells Nate’s family they must alert providers to their son’s MH before any procedure that requires anesthesia. She also refers them to the Malignant Hyperthermia Association of the United States for information and enrollment in the MH registry.        AN

Veronica Y. Amos, PhD, is assistant director of the nurse anesthesia program and an assistant professor at the University of Maryland School of Nursing in Baltimore.

In a clinical encounter, nurses get to interview a patient, asking them the most private of questions, and with the help of a stethoscope...
Read more
Clinical Topics

The end of the COVID-19 pandemic is in sight. Nurses may think the mental and emotional stressors experienced at the height of the pandemic...
Read more