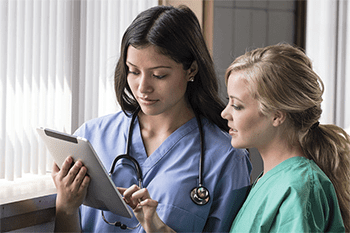 New nurse managers step up to the leadership challenge

Generational differences, staffing issues, communication failures, budgeting ordeals—these are just some of the challenges that freshly promoted nurse managers may face in their new roles. Through on-the-job training, attending specialized workshops, and peer support, RNs not only find solutions to these challenges—but they also find out they’re not alone.

Nurse managers have their leadership skills put to the test as soon as they step into the role. When Christopher Bayne, MSN, RN, became a nurse manager at the University of Kansas Cancer Center Westwood in September 2017, he was nervous. Along with being an external hire, he was the only man in the department. When faced with uncertainty, Bayne chose to be open and honest with his staff. He admitted when he didn’t have the answer to a question and promised to follow up. “I think that honesty helped nurses respect me more,” he said, adding that it also aided him in learning about the department.

Tina Humbel, DNP, MHA, RN-BC, CCRN-K, CPN, a nurse manager in the Emergency Medicine and Trauma Center at Children’s National Health System in Washington, D.C., takes a similar approach. When working with teams from other departments who may question her decisions, “I try not to be defensive,” Humbel explained. In those situations, she reminds herself that making the patient experience better is the overall goal for everyone involved and does her best to resolve issues thoughtfully.

Bayne noted the importance of leading by example. “If you are typically upbeat, the staff will hopefully adopt your style,” he said. “If you are negative, then the morale of the team will be lessened.”

Inside any unit, work styles differ across generations. In general, the three generations in the workforce now see work-life balance in one of three ways, according to a workshop for new managers offered by the American Nurses Association (ANA). For baby boomers, it’s “work first,” for Generation X it’s “50% work, 50% life,” and for millennials, it’s “life first.”

Erica Robinson, RN, an assistant nurse manager in the postanesthesia care unit at New York Presbyterian Queens, has experienced this firsthand in her department. “Baby boomers are very straightforward; Generation X wants to do their work and go home,” she said. She found that millennials want more of a “coaching” style when receiving feedback.

Not every nurse manager finds this approach valuable when communicating with staff. Said Bayne, “I am more likely to tailor the message based on their personality rather than their age.”

Many nurse managers have little to no experience with budgets. Each manager will have a different situation, but most involve on-the-job learning.

After attending ANA’s workshop for new nurse managers, the budget process “became a little clearer,” said Robinson, an ANANew York member. “It has to be part of your everyday vocabulary or you won’t learn it,” she added.

Humbel, who had very little experience with budgets, agreed that the best way to learn is to jump right in. “Now that I have undergone a budget cycle,” she said, “I feel that I am closer to being prepared next time.” She also suggested that nurses meet with their organization’s chief financial officer or department lead to learn more details.

Bayne had never worked on budgets before he became a nurse manager, but plenty of practice helped raise his skill level. “My assistant director and I have sat down many times to review my budget, and I feel much more confident than I did in the beginning,” he said.

One of the most critical challenges that new nurse managers face is learning how to interview. Not only are they looking for the right skills and attitudes, they need to determine if a candidate is the right fit for the department. ANA’s workshop illustrates this with the KASH box (Knowledge, Attitude, Skills, Habits), explaining that most businesses spend their time and money developing employees with the left half of the KASH box (knowledge and skills), while most terminations and departures are due to weaknesses in employee attitude and habits.

Bayne, an ANA member, said he used to interview potential staff from a peer’s perspective rather than a manager’s. Now he focuses more on ensuring the new hire is a true fit for the department and examining his or her long-term goals to see if the department is right for that prospective hire. Another challenge on Bayne’s ambulatory unit is staffing. “Once you find the right person, the next challenge is keeping them,” Bayne said.

When he was a staff nurse, Bayne said he was isolated with just his patients during a shift, only thinking about what he needed to do for the next 12 hours. But as a manager, he has to think about how every nurse’s assignment will impact them. “If we have too many short-staffed days, they [staff] do start to look elsewhere,” he added.

Nurse turnover and recruitment of new staff are among the top three challenges identified by respondents in a 2017 Trends and Salary survey of nearly 6,000 nurses by American Nurse Today and ANA. About 60% of managers say recruiting RNs in the past 12 months has been difficult.

Communication skills are critical for nurse managers and key to building strong relationships with staff. “Let nurses know that they can come to you with an issue,” Bayne said, who keeps the lines of communication open by working with his staff to find the best solution to a problem and then updating them on the progress toward a solution. That’s critical because staff want to know that their voices have been heard, he said.

Robinson learned quickly that her staff needed someone to listen to them. That required a change on her part. “I needed to listen a lot more instead of being reactionary,” she said.

Being younger or the same age as most of her direct reports, Robinson has worked hard to stay professional, especially when tension arises. “I have improved my response to negative interactions and manage my emotions,” she said.

Every nurse is susceptible to burnout, but the increased responsibilities of a nurse manager may bring it on sooner. Signs of burnout include chronic fatigue, anxiety, inability to concentrate, lack of empathy, and disengagement from work, according to information provided in the ANA workshop. The workshop curriculum also suggests a number of interventions, like mindfulness training and self-care.

“You need a good foundation outside of work to keep your sanity intact and help you be the best version of yourself you can be,” Robinson explained.

Keeping work and home separate can be difficult, but it’s necessary. Bayne said, “I work 9- to 10-hour days, but if I can help it, I leave work at work. I know that to be successful and not burn out, I need to be able to step away and have personal time.”

Sharing work responsibilities also can help alleviate stress. “I have a nurse manager partner I share job responsibilities with,” Humbel said. “We complement each other and have a shared vision,” she added. Humbel also prioritizes time with her family and goes for a run when she needs to decompress and reflect.

Robinson agreed. “Having strong support outside of the unit is critical to avoiding burnout.”

Elizabeth Moore is a writer at ANA.

• ANA Up and Comers online community

Bayne, Humbel, and Robinson attended the “New Nurse Managers Workshop: Your Roadmap to Success” at the American Nurses Association (ANA) in Silver Spring, Maryland. Presented by Rose Sherman, EdD, RN, NEA-BC, FAAN, and Joyce Batcheller, DNP, RN, NEA-BC, FAAN, the workshop teaches leadership, communication, management, and business skills for new nurse managers, and provides education in finance and staffing. It also brings together new nurse managers from around the country to network and share their experiences.

“Everybody faces the same issues as a new manager,” Bayne said. “Whether you think you’re alone on an island or on a sinking ship, there’s someone (at the workshop) who’s there with you or has been there.”

Before Robinson attended the workshop, she was uncertain about continuing in her assistant manager role. Once there, she saw that she wasn’t the only one to find management difficult.

“The workshop helped me get a better perspective,” she said. “I learned new support systems and different avenues to explore from the other attendees.”

The 2-day workshop is held several times a year at ANA headquarters. The next workshop is in November 2018. Learn more.