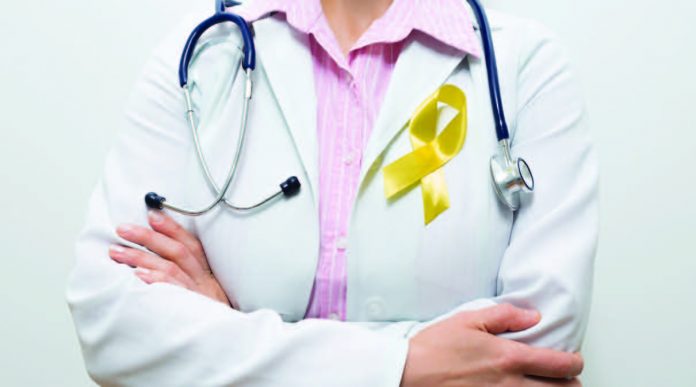 Addressing suicide when it occurs and assessing for risk are key to prevention.

In the article “Grief management after a nurse’s death”, we provided guidelines for helping healthcare organizations support staff as they grieve a colleague’s death. However, when a nurse dies by suicide, grief can be exacerbated by guilt and anger, and a misguided attempt to protect privacy may lead an organization to avoid addressing the death. Our organization has created steps within its bereavement program that are specific to the unique challenges of a suicide death. We’ve also created a suicide prevention program that proactively assesses employee risk.

Suicide and its toll

Research indicates that nurses are at higher risk of suicide than the general population. For every nurse who dies by suicide, countless relatives, friends, patients, and colleagues are left behind to mourn his or her loss. Although the grief experienced after any death can be intense and protracted, sadness and loneliness after suicide frequently is accompanied by guilt, confusion, rejection, shame, anger, and the effects of stigma. Survivors of suicide loss are at risk of developing major depression, post-traumatic stress disorder, suicidal behaviors, and prolonged grief disorder.

Historically, as nurses we have sacrificed our own needs to those of patients. We refrain from burdening others with our own distress and mental health issues. Even if we’re willing to talk about our needs, we may have difficulty finding someone to listen. Stigma adds to the burden of grief after suicide, keeping survivors from seeking support and healing resources. Bereaved individuals report that they have difficulty talking to others because people are uncomfortable discussing suicide. This double-edged sword, can’t talk about it and no one to listen, leaves the bereaved feeling isolated.

The inability to talk about a suicide death frequently is compounded when an organization incorrectly believes that it needs to conceal the cause of death. This conspiracy of silence hinders open discussion and prevents support for those who are grieving. Survivors of suicide loss, perhaps especially those in the healthcare professions, may require proactive supportive measures to acknowledge, discuss, and adaptively cope with their loss.

Organization response to death by suicide

After a death by suicide, we recommend actively—with warmth, compassion, nonjudgment, and acceptance—offering support and informing staff and faculty of resources. Colleagues especially touched by the loss may need relief from assigned duties. Support activities provided after nurse deaths by causes other than suicide include open communication, debriefings, memorial services, and schedule changes (discussed in “Grief management after a nurse’s death”). When a nurse dies by suicide, we also recommend a high-level debriefing with organizational leadership (including risk management and the chief nursing officer) to specifically address the suicide itself. (See Leadership reflection.)

After a nurse’s death by suicide, the bereavement team leader can coordinate and facilitate a debriefing with organizational leadership. The the following questions should be asked during the meeting:

• Did anyone see signals (from the nurse who died or related to events within the organization) that a suicide might occur?
• Has anything surfaced during debriefings that leadership should address?
• Would we do anything differently (in response to a death by suicide or to prevent suicide) in the future?
• Who else needs support and how do we best get it to them?
• Are other employees at risk for suicide?
• Did workplace stressors contribute to the suicide?
• If so, can they be attenuated for the future?

According to the American Foundation for Suicide Prevention (AFSP), no single cause for suicide exists: “Suicide occurs when stressors exceed current coping abilities of someone suffering from a mental health condition.” We know from our employee suicide prevention program (Healer Education, Assessment and Referral [HEAR]) that work-related stressors, such as a new manager, new team, recent relocation and loneliness on the job, feelings of inadequacy due to incomplete orientation, workplace conflict, lateral violence, workload, mismatched values, over-regulation and excessive rules, lack of autonomy and decreased decision latitude, and self or institutional blame for negative patient outcomes, contribute to suicide risk. Workplace stress in some­one with biologic and psychosocial vulnerabilities (for example, pre-existing depression or performance anxiety), other nonwork–related stressors, or untreated or incompletely treated mental health conditions can create a “perfect storm” that leads to suicidal thoughts and even to suicide or a suicide attempt.

To overcome the stigma associated with suicide and proactively assess risk and provide timely treatment, the HEAR program team deploys an annual anonymous, encrypted electronic stress and depression risk screening to all employees and faculty members. Invitations to take the screening are sent via executive team members in staggered batches of 500 so that counselors can keep up with responses. The screening identifies those at risk for suicide and helps program therapists provide feedback, encourage further assessment and dialogue for those at risk, and facilitate treatment referral as appropriate or desired. The encryption, which is managed by the AFSP, allows nurses to remain anonymous throughout counseling and referral if they wish. HEAR has successfully identified approximately 40 nurses per year with suicide risk who have accepted treatment referrals.

The HEAR team mobilizes after critical or stressful workplace events to provide emotional debriefings to anyone affected. Emotional debriefings normalize the situation so that everyone knows that feeling pain, frustration, and sorrow in the face of stressful, sometimes overwhelming, situations is acceptable. The goal of this approach is to make it more likely that employees will reach out for help when needed. In addition, risk management now routinely communicates with the HEAR team so that when an event occurs that requires clinical investigation, HEAR therapists are informed and can quickly offer group emotional debriefings to those who need them and reassure employees that they aren’t alone in their feelings.

The emotional debriefings are culture-shifting interventions that support the healing process and decrease stigma associated with seeking help for mental health issues. We’ve found that as more debriefings occur, word spreads about their benefits, and employees begin to request them instead of waiting for them to be offered. (See Debriefing feedback.)

A nurse’s death by suicide is especially troubling to those left behind. Being open about the fact that the death occurred and recognizing that staff will need to grieve their loss and process their feelings are critical for individual and organizational healing. Take action to decrease suicide risk by initiating a suicide prevention program that educates, confronts stigma, proactively screens nurses for risk, provides referrals to treatment when indicated, and offers emotional support after difficult situations that predictably cause stress. 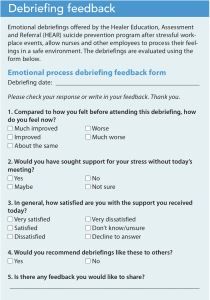 Judy E. Davidson is a nurse scientist at the University of California San Diego (UCSD) Health Sciences and a scientist in the department of psychiatry at UCSD School of Medicine. Rachel Accardi and Courtney Sanchez are program counselors in the UCSD HEAR program. Sidney Zisook is a distinguished professor in the department of psychiatry at UCSD. The authors welcome your questions about developing your own nurse suicide prevention program (email jdavidson@health.ucsd.edu).