Nurses take action and look to a bold future 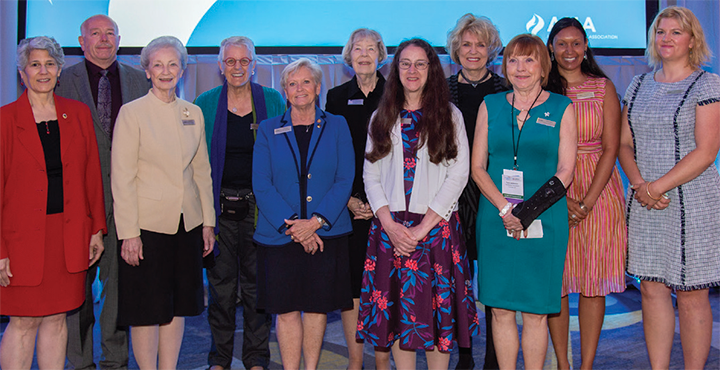 The Assembly is composed of representatives from ANA’s constituent and state nurses associations (C/SNAs), the Individual Member Division (IMD), and specialty nursing organizational affiliates (OAs), as well as the ANA Board of Directors. Attendees addressed nurse safety, advocacy, and ethical issues, and eligible voting representatives elected new leaders— including the first man elected president in the association’s history (see page 27).

During her opening remarks, ANA President Pamela Cipriano, PhD, RN, NEA-BC, FAAN, reflected on the work of the association during her two terms as president.

“Advocacy and activism represent the tone and direction of our work over the last 4 years,” Cipriano said to the nearly 300 Assembly attendees, which included observers. “It’s bittersweet that this will be my last Membership Assembly presentation to you, but I’m pleased to talk to you about how together we have become stronger and what we’ve accomplished.”

Cipriano noted ANA’s visibility and leadership during the Ebola crisis. “ANA had to stop misinformation and reduce fear to support nurses and other caregivers,” said Cipriano. The organization’s actions provided a voice of calm and helped healthcare professionals move from crisis mode to resolving problems.

ANA also used its voice to advocate for nurses who were making difficult ethical decisions, addressed the growing incidence of workplace violence, pushed for safe staffing measures, and helped amplify the healthcare community’s objections to the current Administration’s attacks on access to quality, affordable healthcare.

“Healthcare became a lightning rod issue after the 2016 election,” Cipriano said, leading ANA to devote most of 2017 to fighting against harmful changes to healthcare policy. This hard work in advocacy prompted Forbes magazine to call ANA an increasingly politically powerful lobbying force in Washington, DC, and in state capitals across the country.

Cipriano also touched on one of the most unsettling incidents of 2017: The forcible arrest of Alex Wubbels, BSN, RN, a Utah Nurses Association member who refused to allow a blood draw from an unconscious patient.

“The bottom line is that violence and harm to nurses should never happen, and nurses should not accept it as part of the job. I’m proud of the #EndNurseAbuse campaign,” Cipriano said. Launched in 2017 to address workplace abuse against nurses, the initiative includes sexual harassment and ANA’s strong support for the #TimesUpNow movement that promotes accountability and consequences for abuse, harassment, sexual assault, and inequality in the workplace. #EndNurseAbuse has garnered 14,000 pledges and is still growing.

Additionally, building upon ANA’s zero tolerance policy for workplace violence, ANA convened a panel of experts in May to address barriers to reporting abuse against nurses to foster safe work environments.

The Assembly subsequently approved recommendations that call on ANA to:

New ANA Enterprise Chief Executive Officer Loressa Cole, DNP, MBA, RN, NEA-BC, FACHE, who began her role May 7, addressed the Assembly, expressing gratitude for the opportunity to lead and remarking on the positive atmosphere. “I am so inspired by the conversations, the networking, inspirational messages, and your leadership,” Cole said.

Cole shared leadership lessons she learned throughout her career, specifically in participatory management, quality care, and resilience, and outlined her initial priorities for ANA. Noting that her experience advancing a quality agenda in acute-care settings translates well to her role at ANA, she identified the importance of transparency, doing the right thing, establishing common goals and outcomes, and measuring performance. “We will be transparent, and we will put the interest of America’s nurses first,” she said.

In formulating a vision, Cole said that the ANA Enterprise should be the first thought for resources, support, and education, and be considered a professional home for every nurse. “Starting with the student’s experience, we must meet nurses where they are, and meet them again and again at every milestone across his or her career span,”

Cole said. Cole pointed to a future where nurses lead, saying: “Our nation and our patients are counting on us to show up and speak up. We must not fail them. ANA will be there, and I know you will join us.”

On June 22, ANA joined other nursing organizations commending the passage of the SUPPORT for Patients and Communities Act (H.R. 6), which will extend prescribing authority to all advanced practice registered nurses to help combat the opioid crisis. The bill has moved to the Senate. By acclamation, the Assembly endorsed an updated ANA board statement condemning the Administration’s practice of separating children from families at the United States border (Read the statement at bit.ly/2t9x2mK).

In a session on June 23, participants engaged in six different policy cafés, a rotating format that allowed for briefings on key issues and opportunities to give feedback. Policy cafés enabled ANA to gather input on topics regarding nursing assistive personnel, licensure evolution, opioids, sexual harassment, promotion and disease prevention, and equipment/safety procedures to prevent transmission of bloodborne diseases.

A reflection—and a look forward

Cipriano’s term will end at the close of 2018. Looking ahead, she spoke about ANA’s strategic plan and told representatives that if nurses “are not speaking out, we are not fulfilling our ethical obligation.” Cipriano, who has been an ANA member since she graduated from nursing school, said that she will continue to support ANA from the sidelines and called nurses “the most intelligent and dedicated individuals who are strong and smart and brave and bold.”

— Elizabeth Moore is a writer at ANA.

Harnessing our anger in constructive ways