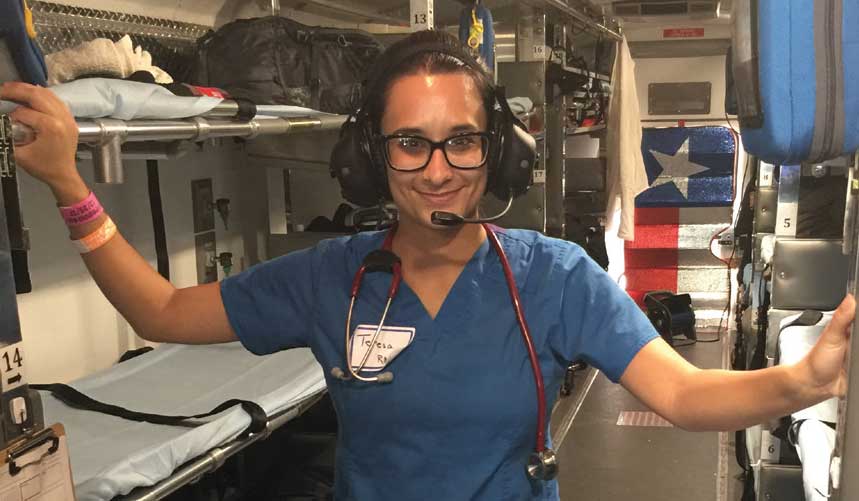 Nurses respond to the needs of patients and their communities.

While working the night shift in the surgical intensive care unit (ICU) of her New Jersey hospital, Teresa Weisneck, BSN, RN, could not help but be moved by the heartbreaking images she saw flashing on the TV screen in her patient’s room. Hurricane Harvey was wreaking havoc in Houston and the surrounding communities. 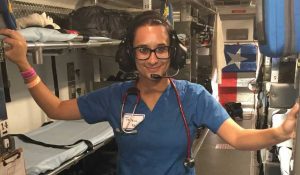 “I had volunteered during Superstorm Sandy a few years ago and remember how much support people needed from nurses,” said Weisneck, a New Jersey State Nurses Association (NJSNA) member. “I knew I had to help [in Texas].”

Roughly 36 hours later, she and about 50 other healthcare professionals landed at Ellington Field Joint Reserve Base on the outskirts of Houston to do just that as part of a trip arranged by the New Jersey Hospital Association and promoted by NJSNA.

During her weeklong stay that began August 31, Weisneck primarily volunteered 12-hour shifts in the ICU to relieve staff nurses at Bay Area Regional Medical Center in Webster. She also spent some of her off hours volunteering at a Houston convention center-turned-emergency shelter, triaging displaced residents with healthcare issues and providing oneon- one time with others who were waiting out the storm and worrying about what they would find when they returned home.

Weisneck is just one of countless nurses who volunteered or worked at their facilities or emergency shelters, as flooding and fires ravaged large swaths of the nation this summer and fall. Disaster relief and recovery in many of those areas—from California to Texas to Florida on the mainland to the U.S. Virgin Islands and Puerto Rico—is ongoing, with some communities still experiencing urgent needs.

Preparing for disasters and their aftermath

Effective disaster preparedness strategies gleaned from previous catastrophic events and reinforced by educational activities, strengthened government and health system partnerships, and some infrastructure changes, such as floodgates around hospitals, have helped healthcare facilities better withstand disasters, according to nurses. That said, the volatility of nature will always remain.

According to disaster preparedness expert Sharon Stanley, PhD, RN, RS, no true test exists of how prepare healthcare professionals will be in a catastrophic incident, but previous exposure to complex situations and incidents build resiliency in practice before, during, and after events.

“As much as you’ve planned and practiced and exercised, it will be chaos [when a major disaster first occurs],” said Stanley, former president of the Association of Public Health Nurses and former chief nurse of the American Red Cross. “The mental gymnastics it takes to practice care in that situation is a lesson learned that can be carried to the next disaster and the next. But you’re never all the way there.”

Further, disaster planning isn’t about putting something on paper. It’s about bringing together all stakeholders, ensuringthey understand their rolesand relationships, and determining together how they can keep their population safe and well, according to Stanley.

Days before the hurricane hit, Jim Allard, DNP, RN, NEA-BC, and Jennifer Nitschmann, MSN, RN, were in full disaster preparedness mode—closely tracking Harvey’s path with other key healthcare system leaders; communicating with their respective staff about their readiness to respond; and ensuring extra food, water, fuel for generators and vehicles, and critical patient supplies were in place. And then they waited. Nitschmann, vice president of Patient Care at the Magnet®-designated Baylor St. Luke’s Medical Center in Houston, knew that her facility could quickly become an island in the middle of floodwaters given the area’s many bayous and canals and the several feet of rain that were predicted.

Late night on August 25 the hurricane made landfall.

“By 4:30 am, rain was coming straight down, and then in sideways sheets,” said Nitschmann, a Texas Nurses Association (TNA) member. “We were blessed in that we sustained minimal damage and were able to keep our doors open and serve patients.”

Floodwaters surrounded but did not enter The Woman’s Hospital of Texas, in the heart of Houston and where Allard is the interim chief nursing officer. The facility, which sees more than 11,000 deliveries a year and has a sizable neonatal ICU, was able to continue functioning, although elective surgeries were suspended.

Visitors and patients who were ready for discharge at The Woman’s Hospital and Baylor St. Luke’s were forced to shelter in place for several days, and both facilities also admitted evacuated patients from other hospitals.

Like Nitschmann, Allard was part of a leadership team staffing a command center.

“My role as senior leadership was to listen to and speak for nursing and patient care,” said Allard, a TNA member.

Ongoing communication with staff, facility and system leadership, patients, and visitors was critical so emergency-response leaders could assess needs, adjust resources, and quell fears. To that end, Allard participated in rounding with other leaders on both day and night shifts throughout the hospital.

“We used these huddles also for moments of reflection, sharing stories, and prayer,” he said.

Looking specifically at the nursing workforce and the disaster preparedness plan, bedside nurses were assigned to team A, which means they respond during the initial hours or days of the disaster, or team B, those who relieve their colleagues. 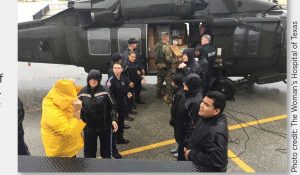 “However, we train everybody in emergency operations,” Allard said. He also noted that both teams are representative of the four generations of nurses who are working at the bedside to ensure an appropriate skill mix throughout. Further, HCA corporate leaders arranged for 75 nurses from other facilities to provide additional relief after the storm subsided.

As for basic supplies, nurses and other staff slept on beds in vacant patient rooms or on air mattresses. And although there was an adequate amount of food for patients, visitors, and staff, choices were fewer during the lockdown phase, which lasted about 5 days.

Fortunately, power and phones remained intact at both hospitals, which gave nurses the ability to maintain contact with their families. On the down side, the impassability of roads and other destructive forces affected some relief team members from making it to their hospitals as planned. Noted Allard, “It was an unplanned exercise in team-building. Nurses and other staff helped in any way they could—from doing laundry to serving meals in the cafeteria.”

“All of our staff gave 110 percent,” Nitschmann said.

Caring for the community

In anticipation of Irma hitting the East Coast of Florida as a category 4 hurricane, Palm Beach County residents with special needs and their caregivers headed for the South Florida Fairgrounds shelter the morning of September 8.

“We had so many people with special needs that we had to open a second shelter,” said Connie Upshaw, MPH, BSN, RN, a community health nursing consultant with Florida Health Palm Beach County who served as the nursing services lead. At its peak, the main shelter housed 450 residents who had healthcare needs, including 15 children, along with their caregivers and public health staff. An additional 80 residents stayed at the quickly opened smaller shelter.

The population was predominantly older adults who required electricity to meet their needs, including keeping their oxygen concentrators functioning and their insulin refrigerated, according to Upshaw, a Florida Nurses Association member. Both shelters had back-up generators.

Public health nurses, and later some volunteer nurses from the community, worked practically nonstop to help displaced individuals with their medications, toileting, and other activities of daily living; perform wound care; and assist with transfers and repositioning on the low-lying cots. Nurses closely monitored residents, some of whom began to decompensate and had to be transferred to the hospital.

Although the hurricane veered toward the Gulf Coast, winds were strong and neighborhoods lost power, requiring the shelter to remain open through September 14.

Looking back, Upshaw said that many of the older adults did not have families or other caregivers to help them, which she saw as a stark need in the community.

“But there was one couple who pushed their cots side by side and slept holding hands,” she said.

On the ground to help

“I remember feeling powerless when watching the devastating effects of Hurricane Katrina, so I was determined, like many other nurses, to be of service,” said Mary Kay Goldschmidt, DNP, RN, PHNA-BC, a clinical assistant professor in community health nursing at Virginia Commonwealth University.

Goldschmidt, three VCU accelerated nursing students, and her daughter, an emergency nurse, flew to the Houston area on August 31 to volunteer their time and skills.

On the first day, they made their way to the massive NRG convention center shelter in Houston. “The Harris County Medical Society was running an urgent care clinic there, and they put us to work almost immediately,” said Goldschmidt, a Virginia Nurses Association member. Goldschmidt provided care for patients in isolation rooms, while her daughter served as charge nurse. Students worked with RN preceptors and also walked around the shelter as part of an interprofessional “go” team to assess the needs of evacuees. 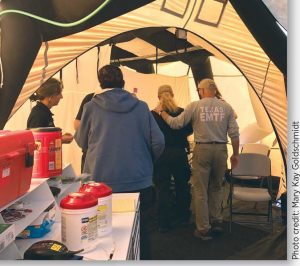 Later they traveled to Beaumont, a low-lying coastal community with extensive flooding, where they provided wellness care at a pop-up clinic and collected information from residents regarding ongoing needs such as unfilled prescriptions

“Most of all we listened,” Goldschmidt said. “People had lost their homes. One woman had walked her way though water and debris to be with her spiritual support network at the clinic.”

Later that day, they also worked at the Beaumont Public Health Department, where they administered about 140 tetanus-diphtheria and hepatitis A injections to emergency responders, many of whom arrived with their clothes still wet from ongoing water rescues.

“We felt of great use and privileged to help,” Goldschmidt said. “Also this was a remarkable experience for the nursing students who volunteered to go to Texas, as all three have an interest in working in public health after graduation. And disaster preparedness, response, and recovery are major responsibilities of public health nurses.”

Many needs remain, nurses step up

A 37-year volunteer with the American Red Cross of Silicon Valley in northern California, Elizabeth Dietz, EdD, RN, CS-NP, has found herself extremely busy for months as she’s helped determine the deployment of nurse volunteers.

“We responded to six major fires in five weeks in California alone,” said Dietz, an ANA\California member. She also recently organized nurse volunteers to help residents in Oregon displaced by a large wildfire, and has been determining how to fill the needs of residents affected by hurricanes Harvey, Irma, Jose, and Maria.

“The biggest issue is that we can’t send all of our volunteers all at once, and right now we don’t have enough volunteers, especially because you are asking people to be away from home for two weeks,” Dietz said. “As in war or other military events, you need three to 10 people backing up each person on the disaster line.”

Dietz is getting ready for her own deployment in November while also preparing the next group of nurse volunteers and debriefing those who’ve returned after witnessing a great deal of trauma.

Back in Houston, Nitschmann said that when a hurricane or other major event happens, an “all hands on deck” response is needed.

“It’s always amazing to me to watch nurses in these situations,” she said. “They all want to provide the best care to their patients and make them feel safe. [During Harvey], they showed a never-quit attitude even when they knew their homes and families were impacted.”

What you can do

Both Baylor St. Luke’s and The Woman’s Hospital have set up disaster relief programs and funds for theiremployees affected by the hurricane. The American Nurses Foundation also created a disaster relief fund for nurses in all areas impacted by these disasters at givedirect.org/donate/?cid=1680.