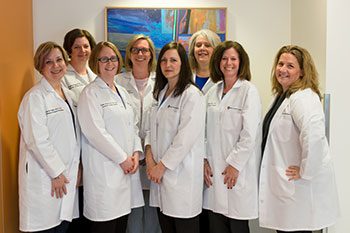 The 10 members of the coordinators of patient placement and staffing at Boston Children’s Hospital pride themselves on their patient and family focus and their willingness to go above and beyond to do what’s right. And, according to Suzanne Reidy, director of patient flow and staffing, they’re “jacks of all trades. We are the in-house supervisors on the night shift, and everyone looks to us first for advice no matter what’s going on.”

All of these qualities are evident in the story this team shared as part of their submission for the American Nurse Today All-Pro Nursing Team award. Here’s that story in their words:

CM was a 2-year-old boy who was born with a congenital heart defect. He had two of the three surgeries that were needed to correct his defect, but after the second surgery, he suffered from poor ventricular function and was placed on the list for a heart transplant and maintained on milrinone infusion at home.

In December 2016, CM was admitted to the hospital for worsening heart failure. In March 2017, he suffered a cardiac arrest and was cannulated to extracorporeal membrane oxygenation (ECMO). He was on and off the transplant list because of sepsis and new seizure activity. Both parents were with CM daily, and they longed for a new heart for their beloved son. More months passed, and CM remained in the cardiac intensive care unit (ICU) on ECMO.

In early September, CM suffered a seizure and was in status epilepticus; he needed to be intubated. When he was extubated a few days later, he exhibited unequal pupils and disordered breathing. A computed tomography (CT) scan showed no new ischemic change, but his neurologic status continued to deteriorate rapidly. He was reintubated, and a CT scan with contrast was performed. The scan showed a brainstem hemorrhage. The parents were present and given the grim findings.

After such a lengthy ICU stay, the parents requested that he be taken to the hospital’s garden for extubation on a beautiful warm September afternoon. My team was called and asked if we could help expedite a garden visit for end of life. We quickly jumped into action. I called the security supervisor and explained the situation. The team was already en route to the garden with the family, so we had to move quickly. We paged engineering to open the door because the garden had just been renovated and wasn’t officially reopened yet. Because the garden is off a busy hallway and intersects three other hallways, we requested that security block each hallway and reroute staff and families.

The staff moved CM to the garden and placed him in his parents’ arms. He was extubated and died peacefully. The family was so grateful for this, and we hope that they can find peace in having their wish granted.

This team of nurses and other healthcare professionals pulled together on a moment’s notice to fulfill a deeply meaningful wish for a young family. The success of their effort speaks to excellent communication among team members and the hospital, a high level of responsiveness, honed decision-making skills, and true professionalism. All attributes of a cohesive and effective nursing team.

First runner-up: Respect is the key 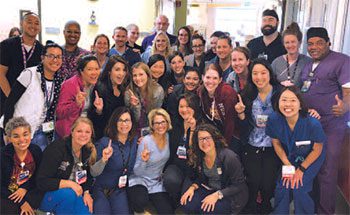 When asked why she submitted the Children’s Hospital Los Angeles pediatric intensive care unit for the American Nurse TodayAll-Pro Nursing Team award, Hui-wen Sato, RN, MSN, MPH, CCRN said, “I wanted to share with a broader audience how nursing can be healthy and not full of negativity and bullying, even on the most chaotic and stressful of days.”

This team’s award submission highlights respect. In response to the question, “Describe your culture of professionalism,” Sato answered: “Our unit is known throughout our hospital for our exceptional managers and our strong teamwork. Our managers are supportive, empathetic, and go out of their way to show praise and both moral and practical support. We see our managers and core charge nurses treat one another and treat us with respect, and it absolutely spills over into how we treat one another at the bedside. We are a blame-free unit, so when mistakes are made, we focus on how to improve our patient care and resolve issues. We don’t focus on gossip or punishing people who make mistakes. This is simply a part of who we are.”

The team’s staffing and assignments also reflect respect. Patient assignments are made with the strengths, weaknesses, and skill level of each nurse in mind. “We also try to assign other nurses with appropriate skill sets in neighboring areas,” said Sato. “We want to ensure that every nurse has the support they need if they have a particularly challenging or very sick patient.”

This multidisciplinary group of healthcare professionals exemplifies teamwork at its best, working to care for their patients and support each other.

Aimee Sharp, MSN, RN, CCRN, NE-BC, nurse manager of the intensive care unit (ICU) at AnMed Health, has a lot to be proud of, according to Jay Wright, MSN, RN, NEA-BC, director of inpatient nursing for cardiovascular and critical care services. “Aimee has done so much to develop a culture of change,” said Wright. “With Aimee’s support, the ICU staff truly embrace evidence-based practice and the staff is fully engaged.” And Sharp says of her team, “We want to figure out how to make things better. I’m fortunate to have this group…what we have is pretty spectacular.”

In this multidisciplinary team’s entry for the All-Pro Nursing Team award, they described their effort to reduce the incidence of hospital-acquired Clostridium difficile (C. diff) in the ICU. They identified a lack of clear responsibility for cleaning some equipment in patient rooms. Some of the steps the team took to solve this problem included creating a checklist that clearly defines what should be cleaned by environmental services and what should be cleaned by nurses. In re-evaluating the way rooms were cleaned, the team found that using ultraviolet light therapy after each discharge or transfer didn’t seem to make a big impact on the C. diff rate. In response, they instituted bleach cleaning three times a week in all rooms. And, in coordination with the lab, the team created a C. diff validation form with strict testing criteria. The result of all of their efforts was an 84% reduction in C. diff cases (from 19 in 2015 to 15 in 2016 to 3 in 2017).

Third runner-up: All in the family

Dorothy Garrison, BSN, RN, nurse clinician at Sentara Norfolk General Hospital, says that the “special care nursery staff see each other as family.” And, based on the team’s submission for the American Nurse Today All-Pro Nursing Team award, they see their patients that way, too.

Debra (not her real name) was transferred to the hospital’s maternal high-risk quaternary care center when her membranes ruptured at 32 weeks’ gestation. She hadn’t received any prenatal care after 18 weeks, and although she was 34 years old, she had the mental cognition of a 13-year-old. Debra’s daughter was born with respiratory distress and was placed on continuous positive airway pressure, antibiotics, thermoregulatory support, and tube feedings.

Debra was discharged while her daughter remained in the hospital. Because Debra had no family in the area, she spent a month at the Ronald McDonald House across the street. During that time, the nurses on the team helped her with many of her basic needs, including food and assistance crossing the busy street; they also communicated with the Ronald McDonald House staff to ensure that she was able to do her laundry and properly store her breast milk.

In addition, the staff helped Debra prepare to go home with her baby. They taught her about proper nutrition, safe sleeping habits, the importance of medical follow-up, and coping mechanisms.

“When Debra’s baby was discharged, there wasn’t a dry eye to be found,” said Garrison. “But that wasn’t because of fear. It was because we knew in our hearts that Debra was going to have the skills, resources, and ability to care for her child.”