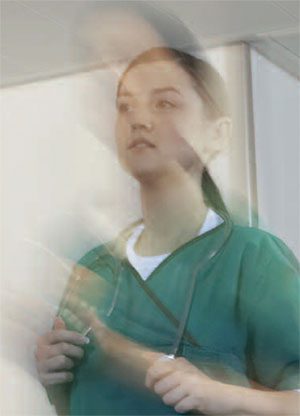 Recognizing complications in the oncology patient

Susan finds Ms. Little to be pale, but alert, with clear, coherent speech. She was dizzy earlier in the day, but had no previous episodes of syncope and now says, “I’m fine.” Vital signs are temperature 98.4° F (36.9° C), pulse 107 beats/minute (bpm), and respiratory rate 24 breaths/minute. Ms. Little says she is a bit short of breath. Blood pressure is 67/51 mm Hg, and oxygen saturation (O2 sat) is 91% on room air. When Susan places Ms. Little on a cardiac monitor, it shows sinus tachycardia.

Susan starts oxygen 2 L by nasal cannula per protocol and activates the rapid response team (RRT). Before the team arrives, Ms. Little says she had a banana and half a glass of milk for breakfast around 7 a.m. She admits she has been nauseated for a few days, information she didn’t share during chemotherapy, and has consumed few liquids. Susan does a bedside glucose check, which shows 110 mg/dL. Susan also learns that Ms. Little received fluids before her chemotherapy.

Ms. Little expresses concern about getting her blood transfusion, which is scheduled for the next day. Susan notes on Ms. Little’s health record that her most recent hemoglobin (Hb) is 7.1 g/dL, but she sees no signs of active bleeding.

The RRT arrives and orders a complete blood count and chemistry panel, as well as a 1 L bolus of normal saline (NS) to be given through Ms. Little’s port, which was placed in her right subclavian vein. Susan sees no ede­ma, erythema, tenderness, or leakage around the site that would indicate infection. Using good hand hygiene and wearing gloves, Susan flushes the port with NS, discards some blood from the catheter, then draws blood for the labwork. Because she knows the catheter is pa­tent, Susan then starts the NS bolus. After the infusion, Ms. Little has a heart rate of 98 bpm, respirations of 19 breaths per minute, and blood pressure of 100/60 mm Hg. Her O2 sat is now 98%, so oxygen is discontinued.

Side effects of doxorubicin include myelosuppression, such as thrombocytopenia, neutropenia, and anemia, cardiomyopathy, and arrhythmias. Ms. Little demonstrated several signs and symptoms of anemia, which include fatigue, shortness of breath, dizziness, head­ache, coldness in the hands and feet, and pale skin.

Untreated anemia can lead to cardiac problems such as hypotension and tachycardia, as was the case with Ms. Little. Although she received hydration before chemo­therapy, her low fluid intake likely made her dehydrated, which further contributed to her hypotension. Fortunately, she responded to fluid replacement, so she didn’t require vasopressors, which should be used only after hypovolemia is corrected.

Before discharge, her nurse reviews with Ms. Little the signs and symptoms that should prompt her to seek help. The nurse also recommends that Ms. Little increase her intake of foods high in iron to help correct her anemia. She is also told to drink fluids along with taking her antiemetic as prescribed to avoid dehydration.

When oncology patients are seen outside their specialty area, nurses need to be alert to potential problems. Susan acted quickly to prevent Ms. Little’s rapid deterioration.

National Institutes of Health. National Heart, Lung, and Blood Institute. What are the signs and symptoms of anemia? 2012.