Reflections on nursing in Vietnam 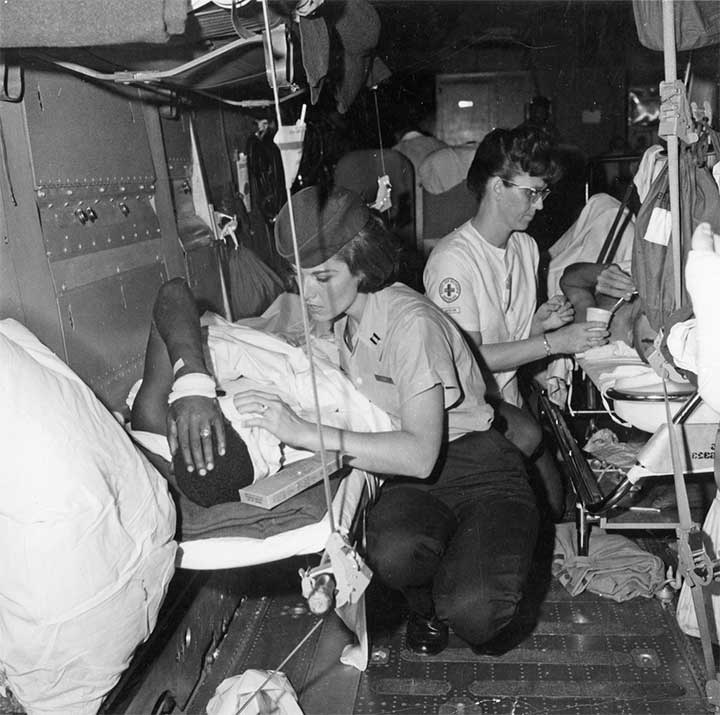 Mary Jo Rice-Mahoney, RN, MSN, Colonel U.S. Army, Retired, knows what it’s like to practice nursing in a war zone. She began her military career during her junior year of nursing school in 1968, when she joined the Army Student Nurse Program at St. Joseph’s College in Emmitsburg, Maryland. Six months before graduation, she was commissioned Second Lieutenant in the U.S. Army Nurse Corps. After graduation, she reported to Fort Dix, New Jersey, where she worked on a busy orthopedic ward and received a crash course in “Combat Injuries 101.”

Tour of duty
In March 1969, Rice-Mahoney received orders to report to the 67th Evacuation Hospital in Qui Nhon, South Vietnam, near the DMZ (demilitarized zone). There, she worked as an intensive care and recovery room nurse 6 days a week in 12-hour shifts. “You worked when they needed you and rested when you found the time,” she says. “If you were asked to work 7 days a week, you didn’t question your commanders. You just responded to the needs of your team.”
During her tour of duty, she didn’t think about the politics of war. She was too focused on developing her nursing skills—learning about ventilators, soft-tissue injuries, abdominal wounds, orthopedic fractures, and neurologic casualties. It wasn’t just the war injuries that kept the nurses busy, but also medical cases (strokes and heart attacks), plus diseases endemic to the area, such as malaria and hepatitis. At the 67th Evac, the patients came from all the services. “We were ready 24/7 to care for anything that came our way.”

Fragments of memory
In Vietnam, explosions were everywhere. Burn injuries were some of the worst casualties of war. They were treated with Sulfamylon, a thick cream applied over affected areas every 4 to 6 hours. “The difficult part was removing the old cream before reapplying more to the skin,” says Rice-Mahoney. “I remember hearing patients cry out even after a hefty dose of narcotics.”
One of her patients, a double amputee in the intensive care unit, received a letter from his wife telling him she was divorcing him. “So not only were these men going through the trauma of combat, but also dealing with struggles in their personal lives,” says Rice-Mahoney. “We were nursing their wounds and their spirits.”

She can’t piece together all the details about her year tour of duty and sometimes needs a little help from her friends. In 1994, she entered her name and military information into a computer database. “A patient I cared for during the Vietnam War found me,” she says. They met in 1995 at the dedication of the Women’s Memorial in Washington, D.C., and have kept in touch ever since. “He remembered everything: my face, the name on my fatigue army shirt, even his surgeon’s name,” says Rice-Mahoney. “What I recalled was his depression after a massive leg injury.”

She listened carefully as he reconstructed his experience at the 67th Evac. “You assisted me from my bed into an old, rickety wheelchair. There were several Vietnamese war orphans in the hospital, and you placed one of the toddlers, an amputee, on my lap.
It was then I realized that if this child could smile, laugh, and live life to the fullest, I could do the same.”

Effects of war
The effects of war are damaging in many ways—not only for soldiers, but for countries involved and their people. Rice-Mahoney bears witness to the results of warfare: “There are no winners in war.”

She encourages nurses who are interested in a military career to join the service of their choice. She tells them, “When you enlist in the military, whether active duty or reserves, you join with the understanding that you’ll be provided with wonderful nursing experiences.”
As Rice-Mahoney looks back on her 30-year military career she smiles. “It provided me the opportunity to travel around the world, learn about different cultures, perform various nursing procedures, make life-long friends, and live through a combat experience. It’s where my love of nursing began.”

How shall we mourn our dead?