Sepsis beyond the hospital 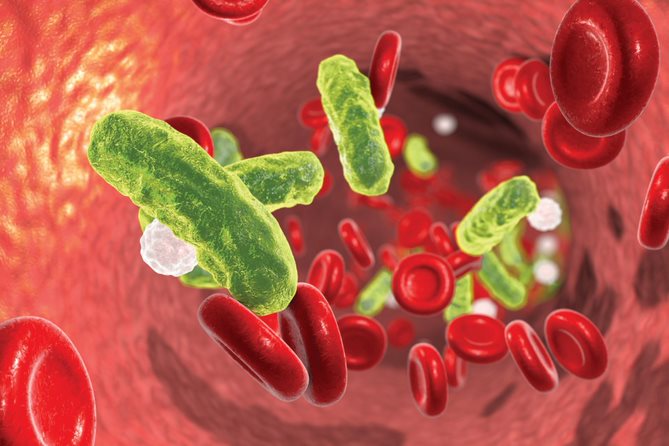 Nurses are on the frontline of preventing sepsis in the community.

HOSPITALS have made great strides in early sepsis recognition and adherence to evidence-based bundles, but patients who have been treated for sepsis may redevelop the condition after they’ve been discharged from the hospital. In fact, 70% to 80% of sepsis cases originate in the community. Unfortunately, little information exists to aid community providers and patients in early identification, assessment, and prevention. (See Sepsis defined.) With adequate training and resources, nurses who work in community settings, including in the home, can provide patient education, promote public awareness, and expedite care. 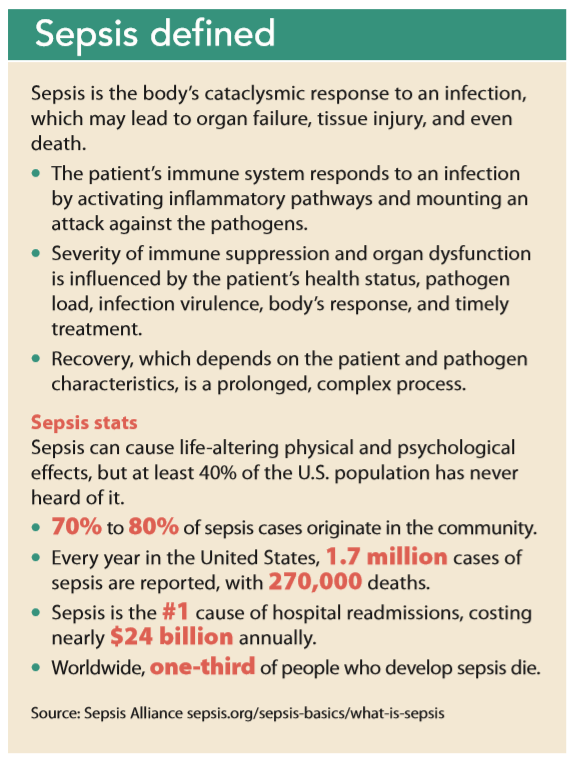 Although the very young and those with chronic health conditions or compromised immune systems are at high risk for sepsis, the highest risk is for people over 65 years old, according to the Sepsis Alliance. Recognizing infections that could develop into sepsis in elderly patients is challenging because of vague symptoms and age-related chronic diseases and pathologic changes.

For example, urinary tract infections (UTIs) may be mistaken for delirium in older patients because they may not display typical symptoms (dysuria, frequency, or hesitancy); instead, they may appear disoriented and confused. Fever may be masked because of diminished inflammatory response. Other nonspecific symptoms include weakness, weight loss, malaise, urinary incontinence, behavior changes, and falls. Red flags include a recent history of or hospitalization for infection, a compromised immune system, fever, tachycardia and/or tachypnea, difficulty maintaining a normal oxygen saturation, decreased urine output, hypotension, and diminished capillary refill. If a patient presents with a variety of these signs and symptoms, nurses should notify the primary care provider or, if appropriate, arrange for the patient to be transported to the emergency department. (See Sepsis signs and symptoms.) 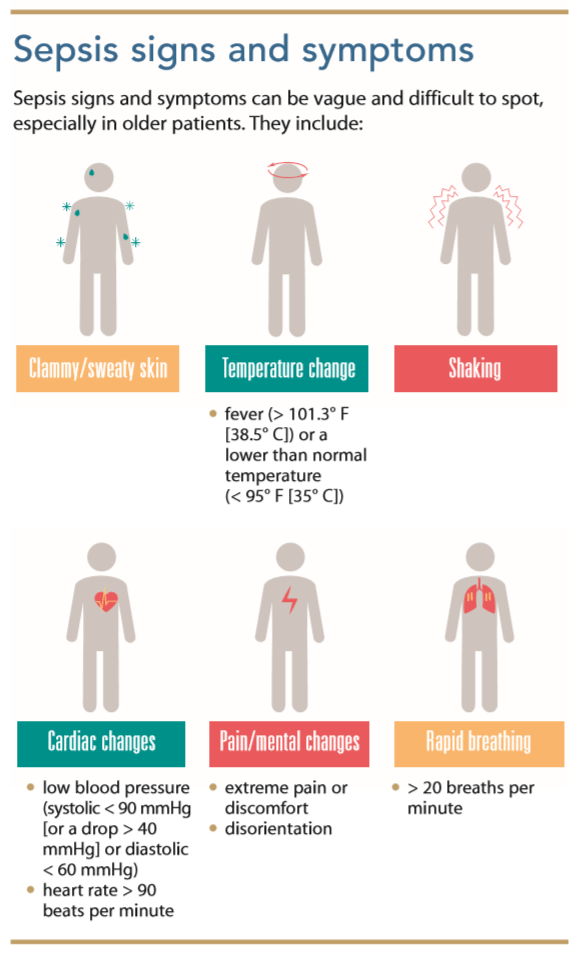 A keen eye and working knowledge of sepsis presentation within this population is essential to ensure quick treatment with antibiotics and fluid management.

According to the Sepsis Alliance, post-sepsis syndrome (PSS) affects up to half of sepsis survivors. The physical and psychological sequelae of sepsis include insomnia, depression, nightmares, thrombosis, fatigue, and decreased cognitive function. The risk of developing PSS is higher among those admitted to the intensive care unit (ICU) and hospitalized for extended periods. Thrombosis and diminished tissue perfusion, which are longterm sequelae of sepsis, can cause gangrene and result in amputations.

Patients should be assessed for PSS when they’re discharged, with a focus on identifying new physical and cognitive issues and making appropriate referrals to physical, occupational, and speech therapy. Nurses should refer patients with new mental or psychological impairments to counseling for emotional support. Many sepsis survivors also report symptoms of post-traumatic stress disorder (PTSD). According to a 2013 Johns Hopkins study, the delirium associated with ICU stays and post-ICU PTSD may be related to the inflammation caused by sepsis, leading to failure of the blood-brain barrier’s protective effect against narcotics and sedatives administered during the hospital stay.

Many patients are unaware that their sepsis diagnosis is associated with cognitive and long-term physical disability. Physical, psychological, and cognitive impairment commonly occur after sepsis, but treatment guidelines provide little guidance about discharge care. Home health providers must be alert for the following to prevent readmission and disease progression:

Follow up frequently with patients who were recently hospitalized or have undergone surgery or an invasive procedure (such as urinary catheterization, central line placement, or intubation). Communicate as necessary with the patient’s primary care provider, and if you see something, say something.

The most common illnesses and conditions leading to sepsis are pneumonia, UTIs, GI infections, and skin/ soft-tissue infections. Common pathogens include Staphylococcus, Escherichia coli, and Streptococcus. Because different types of infections lead to sepsis, talk to patients about their vaccination (pneumococcal and influenza) status. Every year, approximately 1 million adults in the United States get pneumococcal pneumonia and between 50,000 and 70,000 die. Ensure that your patients have received their vaccinations, if appropriate. 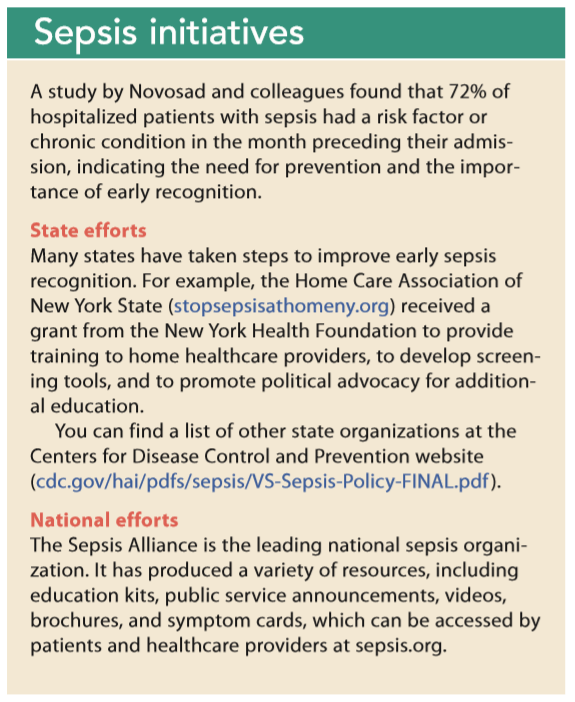 Education is key to prevention. Talk to your patients about early warning signs and the risk factors for infection or recurrent sepsis. Ensure infection control practices (hand hygiene and proper wound care) are followed and advise patients and their families to seek medical care for signs and symptoms of infection. (See Sepsis initiatives.)

In addition to the sepsis risk associated with patients who are chronically ill and those with comorbidities and a compromised immune system, social determinants (such as social, economic, physical, and environmental factors) also contribute to a patient’s risk.

The term social determinants frequently is couched within the broader context of public health. Upstream factors (patient economic stability, education level, social support, access to care, and health knowledge), which frequently are overlooked, are paramount to optimizing patient health status. For example, poor dental care and hygiene practices, limited education about infection prevention practices, and malnutrition all increase a patient’s susceptibility to sepsis. Health insurance is a substantial social health determinant. Several studies indicate a correlation between the uninsured and less comprehensive post-acute care during critical illnesses. For example, Mendu and colleagues found that patients in neighborhoods with a poverty rate of 20% to 40% had a 26% increased chance of developing community-acquired infections compared to those in neighborhoods where the poverty rate was less than 5%, and the risk increased by 49% for those in neighborhoods with a poverty rate higher than 40%.

Home care should be viewed through a public health lens, and area trends should be used to frame nursing interventions. The Centers for Disease Control and Prevention, for example, reports that southern states have the highest sepsis mortality rates, indicating healthcare disparities. Geographical barriers, such as a lower ratio of hospitals per 100,000 people, limited access to care, high poverty levels, lack of medical insurance, and lower social control further compound the issue.

Public health nurses can collaborate with local departments of health to examine the rate of sepsis mortalities within a specific area or community and to use these statistics to engage in social justice advocacy, lead initiatives to reduce disparities, promote educational awareness, and influence public policy and legislation. Visit bit.ly/2Xo18PS to view sepsis mortality rates by state.

Home health nurses can coordinate care and communicate and collaborate with primary care providers during patients’ post-sepsis discharge period to ensure all members of the healthcare team are on the same page. By sharing education with patients and their families, nurses help optimize chronic disease management, increase early symptom recognition, and reduce hospitalizations.