When 35-year-old Tom Jenkins* arrives by ambulance at the emergency department (ED), he’s lethargic. His medical history indicates idiopathic thrombocytopenia purpura (ITP) that hasn’t required treatment since age 18. He takes no medications or supplements. Yesterday, Mr. Jenkins had episodes of vomiting and diarrhea that increased over­night. His wife reports that 2 weeks before he was sluggish but had no other symptoms.

Initial vital signs are blood pressure 70/40 mmHg, no fever, sinus tachycardia of 160 beats/minute (bpm), and respiratory rate of 32 breaths/minute. The ED physician identifies that Mr. Jenkins is hypovolemic and orders an I.V. fluid bolus of 1,000 mL of 0.9% normal saline followed by a maintenance rate of 100 mL per hour. After the bolus is infused and the maintenance rate is started, Mr. Jenkins’ blood pressure drops to 68/38 mmHg. The physician orders a second bolus of 1,000 mL of normal saline. The ECG monitor alarms, showing ventricular fibrillation. Mr. Jenkins has no pulse, and a cardiac arrest is called. ED staff members begin advanced cardiac life support measures, but their efforts aren’t successful. The death certificate documents septic shock from asymptomatic infection as the cause of death.

Sepsis requires the same rapid intervention that’s been successful for patients having a heart attack or a stroke. Because the clinical signs and symptoms of sepsis can vary depending on the type of infection and because symptoms may mimic other health conditions, diagnosis can be difficult, especially in the early stages. However, the key to recovery is early intervention. (See Sepsis facts.) 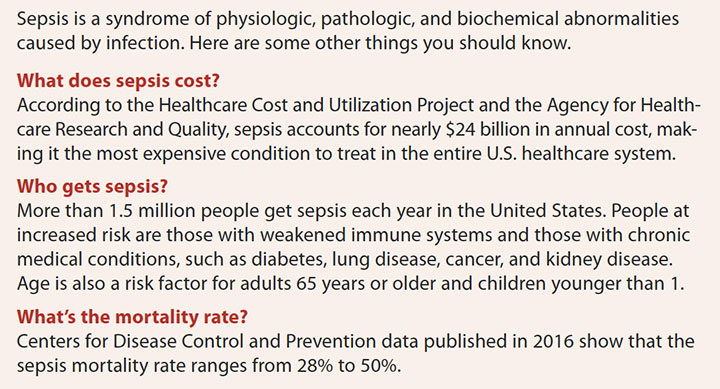 The Surviving Sepsis Campaign and Centers for Medicare & Medicaid (CMS) have developed bundles to encourage early treatment, but these need to be fully operational at the clinician level. (See Campaigning for change.) Our work to do so resulted in a significant reduction in sepsis mortality. 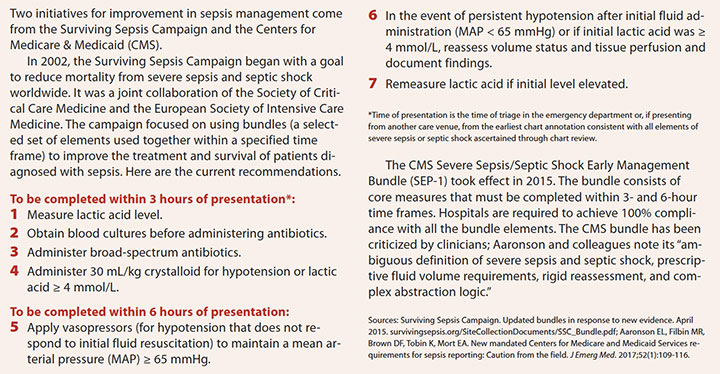 Our hospital used sepsis awareness campaigns to encourage rapid treatment based on established protocols, but we experienced resistance to the CMS sepsis quality bundle, which is outlined in its core measures. Clinicians voiced concerns about the aggressive time frames and the amount of fluids demanded by guidelines. Physicians said the approach didn’t give them time to consider the potential for triggering pulmonary fluid overload. However, the sepsis time clock doesn’t allow time for this kind of consideration.

Although education, data collection, and outcomes were being shared with clinicians, we needed to take additional action to change practice and improve mortality.

In September 2015, the hospital established an interprofessional sepsis team led by the nursing director of emergency and critical care and supported by the department of performance improvement. The team included frontline nurses, res­piratory therapists, pharmacists, physicians, and informatics and quality management staff.

Using the “plan, do, study, act” performance improvement method, the team identified its aim statement—to increase compliance with the CMS sepsis core measure to 80% by June 1, 2018—and gathered baseline statistics. We determined that our severe sepsis mortality was 25% with poor bundle compliance. The team identified several barriers to compliance, including varied physician practice, inconsistent use of the guidelines, and lack of knowl­edge about the sepsis bundle. 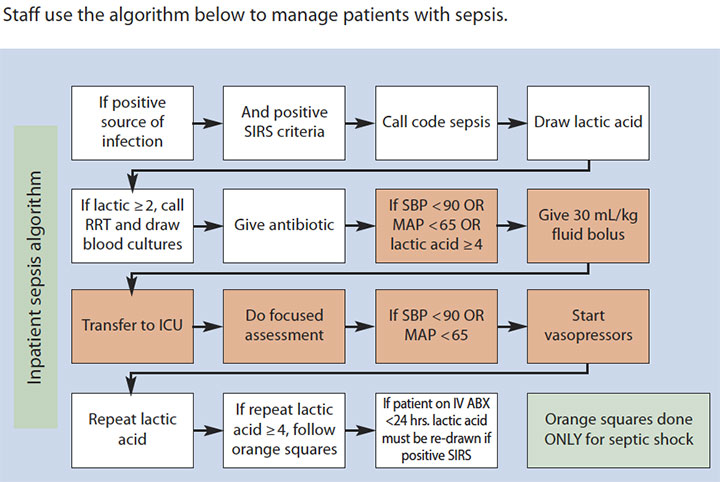 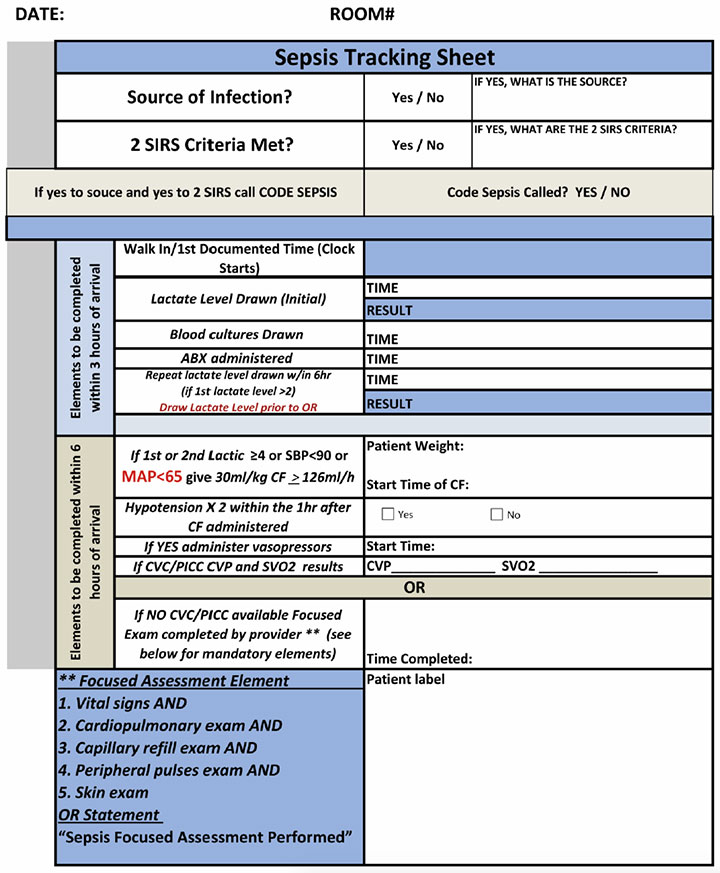 Initial sepsis education for all inpatient nursing staff was conducted using a computer-based learning module. The course objectives focused on sepsis recognition and treatment. Nursing staff from the ICU and ED participated in an advanced course focused on early identification of signs and symptoms of sepsis and early implementation of interventions using the bundle elements. To improve engagement, critical thinking, and awareness of desired outcomes, the course included case studies to present organizational statistics and process gaps.

As part of the sepsis algorithm, every ED patient at initial triage is screened for sepsis and all inpatients are screened (including vital signs and lab values) at the beginning of every shift. If a patient has a source of infection and meets at least two systemic inflammatory response syndrome (SIRS) criteria (temperature < 96.8° F [35° C] or >100.9° F [38° C], tachycardia > 90 bpm, respiratory rate > 20 breaths/minute, white blood cell count > 12,000 mcg/L or < 4,000 mcg/L or > 10% bands) a code sepsis is activated.

In addition, daily monitoring and surveillance processes have been implemented, including reviewing screening tools with leadership and pharmacy staff at daily huddles. Pharmacy support is vital to the success of early identification and treatment to ensure appropriate
antibiotics are ordered. Wins and misses are shared with staff, and
real-time feedback is provided.

Outcomes and implications for practice

By March 2017, our compliance with the CMS sepsis core measures had risen to 78% and our year-to-date severe sepsis mortality had dropped to 13%. Our results show that decreasing the sepsis mortality rate is possible with implementation of a process for meeting the 3-hour and 6-hour bundles as defined by CMS and the Surviving Sepsis Campaign.

Our efforts to reduce sepsis mortality continue. For example, the sepsis performance improvement team is working on improving adherence to the weight-based requirements of 30 mL/kg boluses and reducing clinician resistance to 1,000 mL boluses.

Collaborative practice, diligent surveillance, and continued education are the key takeaways from this performance-improvement initiative. The result is a reduction in sepsis mortality and increased clinician engagement.

Anna Thompson, age 83, presents with nausea and vomiting. Her medical history includes diastolic heart failure and pyloric channel ulcers. Both the cardiology and pulmonology providers are hesitant to administer fluids because her signs and symptoms of sepsis are similar to what would occur with pyloric channel ulcers.

Ms. Thompson’s temperature is 100.5° F (38° C), she has an elevated white blood cell count, and her lactic acid is 4.1 mmol/L. Despite the patient’s medical history, the ED nurse quickly implements the sepsis bundle interventions, obtaining blood cultures, initiating empiric antibiotics, infusing 0.9% normal saline I.V. fluids at 30 mL/kg, and monitoring lactic acid levels. Ms. Thompson is admitted to the ICU, where her blood pressure improves, the nausea and vomiting subside, and her appetite improves.

The healthcare team’s quick action to implement the sepsis bundle interventions resulted in a positive outcome.