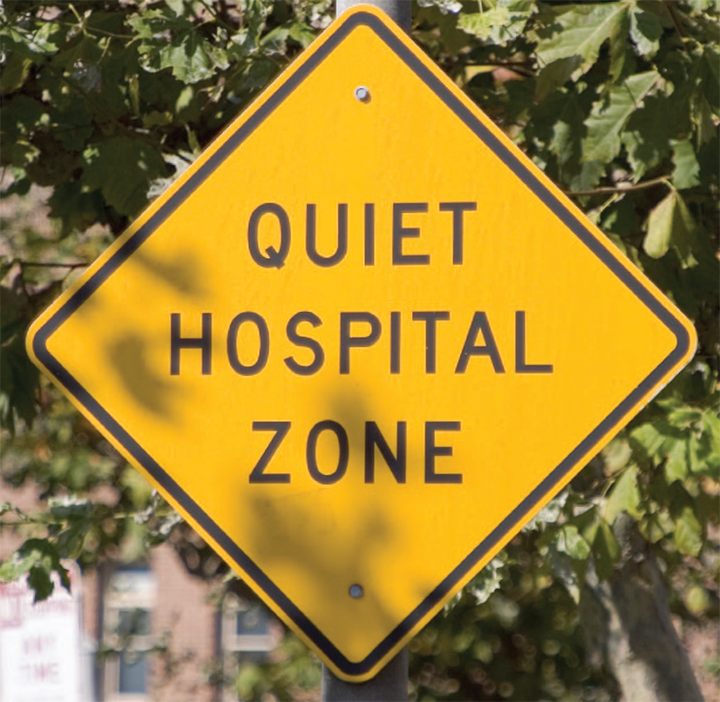 As a child, Pam Ball, BSN, RN, NE-BC, recalls her mother pointing to a sign whenever the family drove past the county hospital that read, “Quiet— Hospital Zone,” and urging the children to lower their voices. 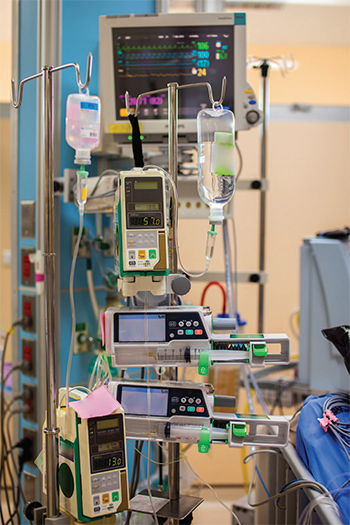 “I thought hospitals were always quiet all the time,” said Ball, who after practicing as a nurse for some 27 years, knows that hospitals generally are far from being quiet places. She points to the beeps of alarms, squeaky wheels of carts, and whirs of air mattresses.

Megan Brunson, MSN, RN, CCRN-CSC, CNL, agrees, adding, “The pumps are often the worst offenders. They are so overly sensitive and ‘smart pumps’ can be too smart. They alarm all the time. We don’t need a 30-minute warning that an I.V. is running low.”

Then there are the loud medication scanners.

“It is the worst to sneak in a room, try and scan an arm band (beep), open the medication cart (beep), scan the bag (beep), hang the bag (beep), reset volume of pump (beep),” said Brunson, president-elect of the American Association of Critical-Care Nurses (AACN), an organizational affiliate of the American Nurses Association (ANA). “The actual intervention is often not the reason the patient wakes up. The sounds from the equipment disturb their rest. We recognize these items are essential to patient safety, but we joke that we wish there was a ‘sleep mode’ on some of the equipment. You can still do all these things, but just take the beep off the medication scanner.”

Because of the importance of sleep to the healing process, Ball and Brunson are among the nurses nationwide who have been looking at innovative and often just common-sense ways to transform hospitals into more restful environments.

Maslow’s hierarchy of needs designates sleep as one of the most basic and critical human requirements. The National Heart, Lung, and Blood Institute affirms that ensuring enough quality sleep at the right times can protect mental and physical health, safety, and quality of life. Further, ongoing sleep deficiency can lead to an increased risk of heart disease, kidney disease, high blood pressure, diabetes, and stroke, as well as a weakened immune system, among other problems.

Looking at environmental factors, a 2015 National Sleep Foundation poll found noise, light, temperature, and mattress type have a greater negative impact on sleep in people dealing with acute or chronic pain than on those who are pain-free.

Those same environmental factors in hospitals can disturb sleep to a heightened level.

“Patients are expecting to sleep when they are in a hospital,” said Turkeisha Brown, MSN, RN, NE-BC, a nurse manager at University of North Carolina (UNC) Hospitals and North Carolina Nurses Association (NCNA) member. But, she added, healthcare professionals traditionally have scheduled many interventions or other types of care around the clock even if patients’ ability to rest suffers.

In other words, patients have to adjust to the rhythm and flow of hospitals, but at what cost?

Barbara Trotter, BSN, RN, CMSRN, co-led a sleep focused intervention project, which was tested on her adult medical unit and a pediatric unit at the University of Virginia (UVA) Medical Center in Charlottesville. She also was among the nurses who shared their efforts through poster presentations at the ANA Quality and Innovation Conference in March.

“We have a very high acuity unit,” Trotter said. “There are a lot of interventions that we have to do with no control over their timing, such as giving I.V. meds and antibiotics and taking vital signs. So patients’ getting an uninterrupted night of sleep is definitely a challenge.”

The UVA project involved reducing patients’ light exposure by switching to red lights during the night. In patient rooms on the adult med unit, the much brighter, white night light bulbs in the ceiling were replaced with less intense red light bulbs. Nurses on the pediatric unit used red “hugger” lights, similar to a penlight that wraps around the neck, during their nighttime interventions.

Additionally, all study patients wore an Actiwatch™, which measured specific light color exposure, sleep, and activity. Participants and nurses also were asked their perceptions about using the lights and the Actiwatch.

In terms of project results, both adult and pediatric patients slept better with reduced white lights, but pediatric patients came closer to achieving more restorative sleep. In addition, the red light intervention met the visual needs of nurses and participants 63% of the time.

According to Trotter, patients reported really liking the red lights, and she added this sleep-promotion intervention holds promise for improving health outcomes. After the study, some nurses on the adult unit began using the hugger lights, as well, which gives them better aim and light during certain clinical interventions at night.

Addressing squeaks and other noise

At UNC Hospitals, nurse managers Brown and Ball’s project focused on reducing environmental noise. First, they and other members of the project team performed sound testing, walking around units at different times to determine noise levels and chief contributors. They also surveyed patients on factors that were affecting their ability to sleep. On that list were bed noises, alarms, squeaking equipment, and sounds from other patients.

The nurses’ efforts led to a number of changes, including replacing the wheels on the trashcans and squeaky wheels on chairs, repairing malfunctioning motors on beds, switching automatic paper towel machines in the hallways with manual ones, and altering the times floors were buffed.

As for noise from other patients, some of it can’t be avoided. “If someone is admitted in the middle of the night or is hard of hearing, there isn’t much we can do,” Brown said.

Ball, an NCNA member, said that nursing staff also developed visitor rules, such as no overnight stays in semiprivate rooms or loud conversations, which they shared with patients and visitors.

In addition to addressing noise, the team reinforced the importance of bundling care to reduce sleep interruptions, and staff offered patients warm washcloths after dinner. “That [intervention] really made a big difference to patients, who told us it contributed to their rest,” Brown said.

Nurses and representatives from other disciplines at UNC Hospitals have continued to expand their sleep promotion mission by testing other initiatives. 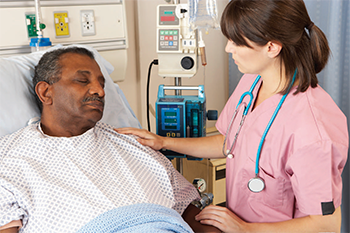 One interdisciplinary effort is called “Quiet Time,” which occurs from 2 PM to 4 PM and from midnight to 5 AM. It includes dimming lights, closing patient room doors, and talking in lower voices. To bolster this intervention, project team members created “Hushpuppies.” Based on a traditional baby shower game, its aim is to build staff awareness and accountability around noise they generate—often without realizing it, noted Brown and Ball, whose poster also was featured at the ANA conference.

At the beginning of the shift, everyone, including physicians, is given a clothespin. If someone hears one of their peers talking too loud, for example, they take away that person’s clothespin. Whoever has the most clothespins at the end of the shift receives a gift card for coffee.

Hushpuppies works so well because it allows people to address loud conversations or other noise and hold each other accountable in a nonconfrontational way, according to Ball.

Other pro-rest efforts that have been implemented range from asking patients about what aids they use at home to help them sleep, such as extra pillows or listening to music, to conducting bedside shift reports outside the patient room based on patient preference.

“Many of the solutions are basically common sense,” Ball said. And while these initiatives have been successful, Ball and Brown both spoke about the ongoing need to reinforce noise reduction with healthcare team members.

Quiet in the ICU

When the ICU that Brunson was working in at Medical City Dallas Hospital transitioned to a more flexible, open visitation policy about 7 years ago, they experienced an upswing in the number of people visiting patients and staying longer.

“Patients would regularly express to us that they were exhausted,” said Brunson, CVICU night supervisor. “They would often ask nurses to be ‘the bad guy’ and ask visitors to leave.”

Given the patient satisfaction Hospital Consumer Assessment of Healthcare Providers and Systems survey’s new emphasis on “quietness of environment” and nurses’ own concerns about patient rest, the unit-based council and Brunson developed a quality initiative to decrease noise levels in decibels.

First they evaluated noise levels with a decibel reader and found that the unit was louder than a construction site both day and night, according to Brunson. The Environmental Protection Agency and the World Health Organization recommend a maximum of about 35 to 45 dB for a hospital environment, but the ICU reading was closer to 75 to 85 dB. They also surveyed patients before and after leaving the ICU on the quietness of the environment. The survey and subsequent interventions were only implemented with patients who were cognitively able.

Instead of restricting visitation, Brunson said the staff implemented “quiet time” from 2 PM to 4 PM and 10 PM to 4 AM.

“We gave patients small hospitality kits with ear plugs, eye masks, and a small card explaining our study, and we offered them white noise machines,” Brunson said. Patients and families also were provided with printed materials on the benefits of rest, such as decreased length of stay, prevention of delirium, and the ability of patients to participate in more educational activities and cardiac rehabilitation.

In addition, overnight visitors were asked to honor the quieter environment by not using their cell phones or turning on TVs or bright lights.

“Although we did not find a difference in the noise levels with decibel readings, our study did find a significant difference in patients’ perceptions of the environment, and their stated quality of sleep highly improved,” she said.

These measures continue to be implemented to this day, with an extra hour added to the overnight quiet time period. And Dallas Hospital healthcare team members also implement other measures, including dimming lights, closing blinds, and limiting interventions, unless medically needed, to avoid disrupting patients who are sleeping.

“We have discovered patients and families are receptive to quiet times, if you explain how essential sleep is to overall recovery,” Brunson said.