Suicide among nurses: What we don’t know might hurt us

This test is no longer available

When celebrities die by suicide, discussion of this stigmatized topic makes its way into the headlines and conversations at work and home. That was true this year when Kate Spade and Anthony Bourdain died by suicide. These shocking deaths of two people who appeared to have it all once again brought our attention to this serious public health issue. We must remember, though, that no group—occupation, race, gender, socioeconomic status—is immune to suicide. (See Troubling numbers.) That includes nurses, who work in a profession that’s strenuous and stressful and requires a high level of compassion and empathy. 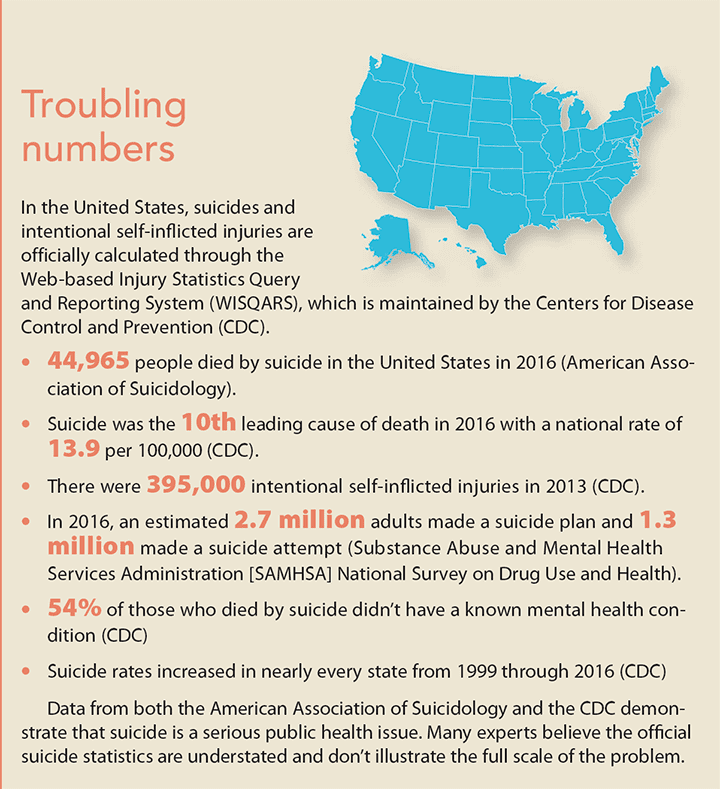 Unfortunately, nurse suicide has been a hidden phenomenon and hasn’t been adequately studied in the United States. The loss of a nurse coworker to suicide is more common than we realize because it’s frequently concealed by the family and organization. However, when we talk about suicide—its causes, who’s at risk, and how we can help to prevent it—we can save lives.

A 1990 report on occupational suicide risk in the United States showed that when adjusted for gender, the odds ratio for a nurse dying by suicide was 1.58 times greater than the general population. Although more recent data for this country isn’t readily available, we can turn to others who have been studying nurse suicide on an ongoing basis. In 2017, the United Kingdom released a report from its Office for National Statistics that reviewed 18,998 suicides between 2011 and 2015 in England and Wales among people age 20 to 64. The report revealed that suicide among female nurses was 23% higher than the average for women in general and the highest among female professionals. The study also showed that most suicides among nurses were by poisoning, which may be linked to their knowledge of and access to drugs. It’s worth noting, however, that identifying occupational risk for suicide is difficult, given the complexity of the relationship.

A general internet search produced no public data identifying a national nurse suicide rate in the United States, yet data on suicide rates are readily available for physicians, teachers, police officers, firefighters, and military personnel. The Centers for Disease Control and Prevention (CDC) maintains a restricted National Violent Death Reporting System (NVDRS), which is the most comprehensive death registry by suicide coded by occupation. It has been growing yearly, with data available for 40 states, the District of Columbia, and Puerto Rico. The dataset has not been queried for nurse suicide statistics.

To address nurse suicide, we must do more, starting with increasing our knowledge and awareness of suicide within the profession, including the cost to society, risk factors, prevention, and barriers to care. (See What’s the cost?) In addition, we need to provide support at all levels with proactive education and risk screening tools (other professions, including physicians, have developed protocols and toolkits specific to their workforce). Individuals, policy makers, professional organizations, and healthcare system leaders (specifically nurse executives and educators) are potential stakeholders for promoting awareness of nurse suicide and implementing programs designed to prevent it. 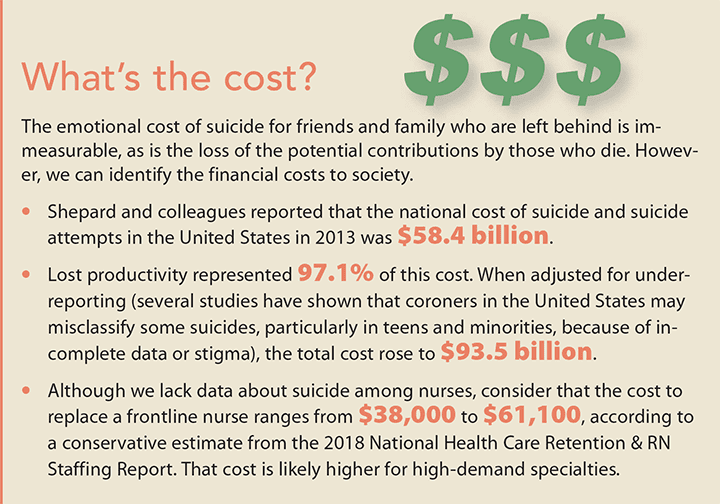 A better understanding of health determinants and their interactions and impact is key to improving and maintaining mental health. Individual and institutional attention to nursing stressors (workload, long hours, lateral violence, bullying, staffing, lack of resources, and dissatisfied patients) may enhance employee engagement and nurse well-being.

With no data to determine the suicide rate for nurses in the United States, risk factors for nurse suicide haven’t received the attention they deserve. What we do know is that the contributing factors related to nurse suicide are numerous and alarming.

Preventing suicide must include two goals: reducing factors that raise the risk of suicide and increasing the factors that protect people from it; often the two overlap. Organizations, nursing leaders, and staff all play a role in prevention, starting with fostering protective factors.

In general, protective factors include access to effective behavioral healthcare; connection to friends, family, and community; good problem-solving and coping skills; and having a sense of purpose. Healthcare organizations can provide additional protection within the workplace by emphasizing teamwork, promoting a culture of safety and wellness (including mental health), providing access to insurance and mental healthcare, establishing support systems, and training nurse leaders and managers.

The American Nurses Association (ANA) and the American Organization of Nurse Executives both recognize the stress in the profession and have called for action to optimize a healthy work environment. And a study on workplace wellness by Baggett and colleagues reported that nurses feel cared for when leaders see them as whole people, recognizing problems they might be having at home as well as at work.

Nurses and organizations may also want to participate in ANA’s Healthy Nurse, Healthy Nation Challenge™, which encourages nurses to take action to improve both mental and physical health (bit.ly/2x41BMH).

In addition, a healthy work environment does not tolerate bullying, which can harm a nurse’s mental health.

Suicide prevention must include strategies that promote mental health and involve both individuals and institutions (communities, workplaces, schools, healthcare organizations).

Prevention starts with research at the state, regional, and national levels. The more we know about suicide among nurses, the better we can advocate for funding to create and disseminate education and prevention programs to healthcare organizations across the country. The first step is developing a standard method for collecting data on suicide among nurses across all healthcare settings.

Lack of research and awareness about nurse suicide stymies education. However, several resources offer suicide prevention information that can be used to educate nurse leaders and staff nurses about what to look for, how to offer support, and where to get help. (See Spotting red flags, taking action.)

All healthcare organizations should publicly display contact information for the National Suicide Prevention Lifeline (1-800-273-8255). The lifeline provides free 24/7 confidential support to anyone in suicide crisis or emotional distress.

Mental health care still carries a stigma. This is particularly true among nurses, many of whom feel that they should carry their burdens alone. Creating an information campaign, speaking openly about suicide and depression, and providing access to mental health resources can help alleviate some of this stigma and normalize requests for assistance.

In 2008, the American Foundation for Suicide Prevention (AFSP), in conjunction with the University of California San Diego Medical School, established the Healer Education Assessment and Referral (HEAR) program. Originally developed for physicians, this prevention program can be adapted to other healthcare professionals, including nurses. (See HEAR.) 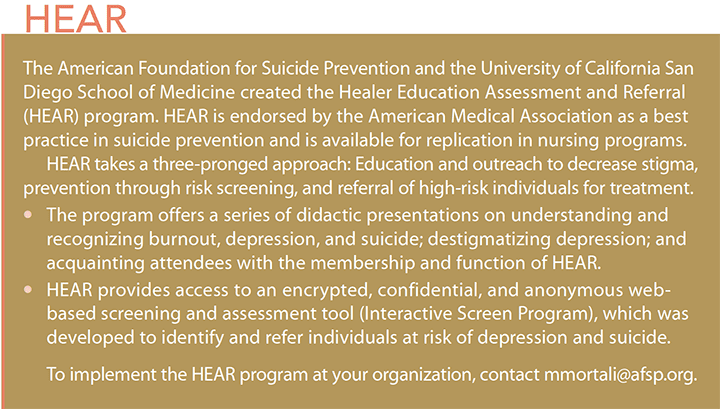 Community activities also can help to reduce stigma. For example, Out of the Darkness Community Walks (bit.ly/2N4OkfZ) not only raise money for AFSP but also draw attention to the issue of suicide.

Before many suicide prevention efforts can be put into action, funding must be secured. Financial resources allocated to prevent suicide are dispersed from various sources, such as the Substance Abuse and Mental Health Services Administration, which, as of September 2017, has awarded $14.5 million in grant money for suicide prevention programs.

Data collection is particularly important because it’s not always collected consistently. Currently, suicide data are most commonly stratified by gender and age. Suicide also can be stratified by means (how the person died), geographic region (which can be stratified from a national level down to the county level), race, and certain occupations.

A national standard for preventing suicide among nurses must commence with the same urgency deployed to address physician suicide. You can take action in your own organization.

Suicide prevention is a team effort that should include nurse leaders, staff nurses, human resources personnel, EAP members, and financial officers. Preventing nurse suicide requires identifying, organizing, inspiring, and facilitating the successful implementation of research, policies, and programs that help nurses at risk or in crisis.

Leah Heather Rizzo is associate vice president for nursing services at Geisinger Northeast in Wilkes-Barre, Pennsylvania, and she’s a doctor of nursing practice student at Carlow University in Pittsburgh, Pennsylvania.


Editor’s note: We want to reinforce to nurses and others who may read this article that it’s important to reach out for help if you have suicidal thoughts. An excellent resource is the National Suicide Prevention Lifeline (800-273-8255).