The multiple causes and myriad presentations of thrombocytopenia 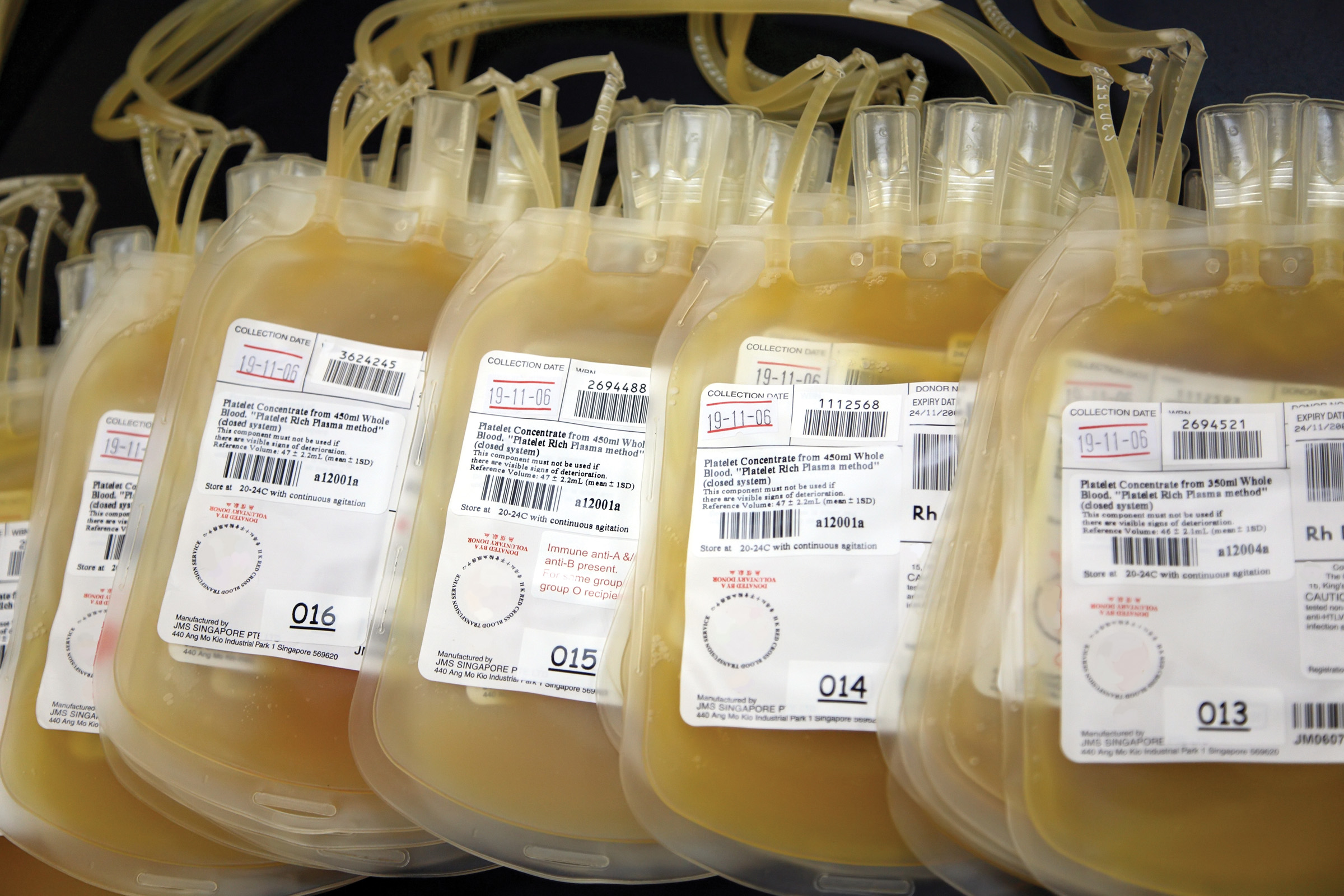 Martin Naber, age 76, arrives at the urgent care clinic with severe bruising of the arms and lower legs. He reports he has had nosebleeds and generalized fatigue for the last week and had an upper respiratory infection about a month ago. When drawing blood samples, the phlebotomist notes Mr. Naber is bleeding more than expected, and applies a pressure dressing to the venipuncture site. Laboratory values reveal prolonged clotting time and a markedly low platelet count. The physician suspects idiopathic thrombocytopenic purpura (ITP).

Since sustaining a pelvic fracture, Joan Baumann, age 56, has been taking prophylactic heparin (5,000 units subcutaneously) every 8 hours. She has been receiving a hep­arin flush through an arterial line. During her second week in the hospital, the nurse notes her right leg is cooler than the left and her pulse is thready. Blood tests show her platelet count has dropped from a normal level to 90,000 cells/mm3; other studies reveal arterial occlusion. The hematologist diagnoses heparin-induced thrombocytopenia (HIT). An emergency thrombectomy is performed to restore blood flow to the leg.

Defined as a platelet count below 150,000 cells/mm3, thrombocytopenia can be innate or acquired. Though relatively rare, it may be complex. Bleeding, the major complication, can manifest as petechiae, purpura on the skin and mucous membranes, and epistaxis (nosebleed) of both nostrils. The disorder isn’t life-threatening unless the platelet count falls below 20,000 cells/mm3. But its complications or underlying cause can be fatal.

Various drugs and medical interventions can affect the hematologic system, leaving patients—especially those requiring critical care—at risk for throm­bo­cytopenia. This article explores the types and causes of thrombocytopenia, clinical features, and treatment.

Acute ITP (also called primary immune thrombocytopenia) is an acquired immune-mediated disorder marked by a platelet count below 100,000 cells/mm3 without obvious initiating factors or underlying causes. It accounts for approximately 89% of thrombocytopenia cases and is more common in children. As in Mr. Naber’s case, ITP may follow an infection. It usually lasts 1 to 2 months and resolves spontaneously without long-term consequences.

Chronic ITP has an insidious onset. It usually arises between ages 20 and 50, affects more women than men, and commonly occurs in persons with other immune-associated disorders, such as systemic lupus erythematosus.

Platelet production may decrease from any condition that injures or depresses the bone marrow, such as cancer, certain drugs and chemicals, and radiation exposure. In drug-
induced thrombocytopenia, an antigen-antibody reaction leads to immune complexes that destroy platelets through complement-mediated lysis. Many drugs can affect the platelet count and function, underscoring the importance of taking a patient’s complete drug history.

Shortened platelet survival due to platelet destruction can result from immune reactions. Snake venom and such drugs as quinidine, morphine, and heroin can destroy platelets through complement activation or a drug antibody-platelet antigen response. Other antigen-antibody responses, such as those seen in sepsis and malaria, can destroy platelets through drug antibody-platelet antigen reactions or complement activation.

This condition occurs in ITP; proteins on the platelet-cell membrane stimulate production of autoantibodies (usually immunoglobulin G), which adhere to the platelet membrane. Although platelets function normally, the spleen reacts as if they’re foreign and destroys them after just 1 to 3 days of circulation.

This phenomenon occurs with splenomegaly. The enlarged spleen can hold a large number of platelets, making them unavailable to the circulating blood volume. Patients with cirrhosis, lymphoma, or leukemia may develop this condition.

Another condition that impairs platelet distribution is disseminated intravascular coagulation (DIC), which arises as a complication of an acute condition. In DIC, platelets are consumed when release of tissue factor activates internal coagulation pathways, as with infection or vascular endothelial injury. The underlying condition triggers a response that causes thrombin generation and secondary fibrinolysis. Thrombin generation activates platelets and increases intravascular fibrin, resulting in thrombocytopenia and formation of thrombi (microclots). Thrombi obstruct capillaries in organs and tissues, leading to tissue necrosis. Ultimately, coagulation factors are depleted; thrombocytopenia and thrombus formation present a clinical picture of bleeding and thrombosis. DIC may occur acutely in patients with acute respiratory distress syndrome or sepsis. It also can be chronic, as in some cases of cancer and aortic aneurysm.

When heparin is the cause

Repeated heparin exposure can cause HIT, an immune-mediated drug reaction. Approximately 3% of patients receiving I.V. heparin develop a transient form of mild to moderate thrombocytopenia. An estimated 600,000 new cases of HIT occur each year. In half that number, thrombotic complications arise.

As Mr. Naber’s and Ms. Baumann’s cases show, thrombocytopenia has diverse presentations. In some patients, signs and symptoms reflect blood loss; in others, increased coagulation and clot formation. General signs and symptoms include:

ITP most often presents as petechiae, purpura, bleeding gums, epistaxis, and menorrhagia. Rarely, patients with acute ITP develop GI bleeding and hematuria. On assessment, they may have a spleen of normal size, no other identifiable causes of thrombocytopenia, and normal bone marrow with a low platelet count. Usually, the diagnosis is made when all other thrombocytopenia causes have been ruled out.

Treatment varies with the underlying cause. To determine if the patient requires treatment, practitioners consider the extent of bleeding; comorbidities that may increase the bleeding risk, complications of various therapies; tolerance of side effects; whether potential interventions could cause bleeding; other medications being administered; and the patient’s concerns, expectations, activity level, and lifestyle.

Treatment guidelines have been established for ITP and HIT. Typically, ITP is managed with oral prednisone or other glucocorticoids, which suppress the autoimmune response. Some patients who respond to these drugs relapse when the drug is withdrawn; they may then receive alternative immunosuppressants, such as azathioprine, cyclo­phosphamide, or cyclosporine. If thrombocytopenia persists despite immunosuppressant therapy or if the disorder causes active bleeding or necessitates a rapid rise in the platelet count, I.V. immunoglobulin may be given. Patients unresponsive to medical management may require a splenectomy.

In HIT, all heparin is withdrawn and the patient is evaluated for less obvious heparin exposure, such as heparin-coated cathe­ters and heparin flushes. Both symptomatic and asymp­tomatic patients are at risk for thrombolic events because the drug reaction can continue for some time after heparin withdrawal. Once all hep­arin is halted, an alternative anticoagulant (such as argatroban, lepirudin, or bivalirudin) must be initiated.

In thrombocytopenia caused by decreased platelet production, the patient’s medications must be reviewed for those that could cause thrombocytopenia; these must be withdrawn or their dosage reduced. (See Drugs that can cause thrombocytopenia by clicking on the PDF icon above.) Drug withdrawal or a dosage reduction may resolve the problem, but some patients may need anti-inflammatory agents for immunosuppression. If decreased platelet production stems from snake venom, antivenin administration may either improve or complicate the clinical picture. Antivenin stems coagulopathy resulting from envenomation but may not reverse all pro­cesses triggered by the snakebite. Coagulopathy may recur and the antivenin’s effect on coagulation may mask initial signs of recurrence. The patient’s laboratory studies should be monitored continuously to assess for stabilization of coagulation or recurrence of coagulation abnormalities.

In thrombocytopenia brought on by altered platelet distribution, the underlying cause must be treated. In many cases, spleen size decreases with treatment and the level of circulating platelets rises.

Nursing interventions include prevention, early identification, and management of thrombocytopenia and its complications. Take steps to minimize the patient’s risk of injury, as by preventing falls, reducing the bleeding risk, and preventing infection. Be aware that thrombocytopenia increases the risk of infection in patients receiving corticosteroids. Steroid-related skin changes, bruising, and bleeding under the skin increase the risk of skin breakdown. Microemboli and altered coagulation raise the risk of ischemia of the extremities and altered organ function. To minimize these problems, ensure continuity of care and evaluate skin and organ function.

When assessing the patient for potential complications and response to treatment, closely monitor laboratory values, especially:

Monitor the patient’s fluid intake and output to evaluate hydration status and check stools for occult blood. Remember that in thrombocytopenia, increased bleeding may lead to hypovolemia, which can affect sensory perception and set the stage for falls and renal dysfunction. If the patient requires isolation due to immunosuppressants or infection, perform a psychosocial assessment to evaluate psychosocial needs.

To minimize the bleeding risk, restrict the use of venipuncture, razors, toothbrushes, dental floss, tampons, and intramuscular and subcutaneous injections. Know that placement of nasogastric tubes, rectal tubes, and suctioning equipment may be restricted. As ordered, withhold drugs that can alter coagulation. In some patients, occupational or physical therapy may be restricted due to the increased risk of bleeding and falls. Good oral care (using oral swabs, a normal saline rinse, or other mouthwash as appropriate) helps to keep mucous membranes moist and minimize bleeding.

Teach the patient and family how to avoid injury. Determine the types of assistance the patient may need with activities of daily living. Point out that some activity restrictions may be needed to minimize the injury risk. Teach patients and family members how to recognize signs and symptoms of infection and ischemia. Make sure they know when to contact the physician or seek immediate medical help.