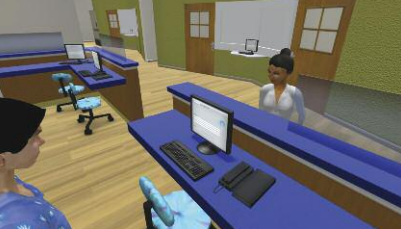 A technological innovation recognized as an exemplar by Magnet® surveyors teaches hospital staff how to navigate their new building before they even set foot in it.

Next summer, our hospital will move to a brand-new building—the Ann & Robert H. Lurie Children’s Hospital of Chicago. This 23-story, state-of-the art hospital is located in the heart of Chicago on the campus of our academic partner, Northwestern University Feinberg School of Medicine. It will offer the latest benefits and innovations in medical technology, research, and family-friendly design.

All 288 licensed inpatient beds in the 1.25-million square-foot hospital will be private, including those in the neonatal intensive care unit. Inpatient unit design will make it more convenient for families to visit and stay together during treatment. Enhanced family amenities include sleeping rooms, in-room showers, Internet access, and shared kitchen, dining, and respite spaces. Through partnerships with Chicago’s premier arts, cultural, and civic institutions, the healing environments have been designed to promote relaxation and discovery. For example, a 5,000 square-foot sky garden in the middle of the hospital will provide a window to the outdoors, offering respite and a translucent interactive light wall that changes color as children approach.

During the multiyear building project, nurses have taken leadership roles in planning the medical spaces, designing patient-care areas, and planning for the move to and occupancy of the facility. Orientation of nurses and other hospital personnel to the building layout and safety features has been essential during the transition phase. This article describes a technological educational innovation, Virtual Path to the Future, recognized as an exemplar by Magnet® appraisers from the American Nursing Credentialing Center.

An important transition-phase activity is orienting employees, nurses, and physicians to the new hospital’s layout, safety features, new clinical technology, and workflow processes. Effective wayfinding and navigation is a key skill for staff. Development of route knowledge (knowing how to navigate between specified landmarks on a known route) and survey knowledge (making a mental map of the building that allows selection of multiple routes) requires repetitive exposure to a large-scale space. But until building construction is completed and a certificate of occupancy is obtained, opportunities to practice wayfinding and navigation are limited. After nurses gain building access, they learn about the new technology and equipment, such as nurse-call communication systems and new cardiopulmonary physiologic monitors.

Virtual Path to the Future

To decompress the amount of learning needed over the last months before the move, our Moment One Readiness Orientation (MORO) team decided to implement a virtual approach to wayfinding and navigation. The team created a computerized training program called Virtual Path to the Future (VPF), which allows hospital personnel to explore a realistic simulation of Lurie Children’s Hospital. The VPF is built within Second Life®, an immersive three-dimensional (3D) environment. Through simple computer-mouse clicks, users can move an avatar to explore a virtual replica of the new hospital. (See Inpatient care team station by clicking the PDF icon above.)

The MORO team had a daunting challenge in building this virtual replica. A nurse educator and a senior instructional designer led the four-member project team, which included individuals with instructional design, graphics design, computer programming, and e-learning experience. Despite team members’ lack of 3D virtual-media experience, they quickly oriented themselves to the project goals, 3D environment, avatar creation and movement, and new lingo. (For instance,
machinima refers to videos produced in the 3D world.) An external vendor with 3D environment-development experience rounded out the team’s capabilities.

When getting started, the MORO team discussed lessons learned with the project leads and a vendor from an earlier proof-of-concept virtual world pilot. The scope of the virtual build supported pilot goals and included the current children’s hospital exterior and selected patient-care floors (emergency department and acute care). The goals were to practice a realistic incendiary-device-with-evacuation disaster drill, to prove that virtual 3D drills are effective in improving situational awareness, and to validate effectiveness of simulation in a virtual world with an after-action participant briefing. Nurses, security officers, and administrators role-played a scenario that introduced suspicious packages and tested emergency-preparedness policies.

Through the pilot, we learned that a healthcare team with no previous exposure to virtual worlds could quickly orient to the environment, become immersed in the scenario, and identify ways to improve communication and processes. We also learned that using predefined avatar roles was an effective way to quickly orient employees to moving about the virtual world. One nurse participant told us, “I’m not into video games so I never had a lot of virtual experience. But it was so easy to become involved in the character [avatar role]. It definitely opened my eyes to a disaster situation and easily allowed me to play along and visualize a real disaster.”

The MORO team chose the pilot vendor to build out the new children’s hospital on four islands (virtual real estate) in Second Life. Because the virtual build was faster than the new hospital’s construction timeline, the vendor built the virtual hospital from architectural floor plans. During the virtual build, the MORO team conducted focus groups with nurses and others to map what a typical day’s footpath might look like in the new hospital. The goal was to provide enough environmental detail for nurses to visualize how they’ll navigate in the new building to deliver care. Nurses told us they wanted to know the location of patient-care areas (diagnostic treatment areas, rehabilitation services, and procedural areas) and new family amenities, such as the healing garden and family learning center. Knowing the location of family resources is especially important to pediatric nurses because they provide family-centered care.

After reviewing focus-group feedback, the MORO team identified 26 avatar roles and footpaths. The next task was to build the avatars with the typical attire and uniforms of the various roles. The virtual environment easily accommodates role-playing and diversity. Currently, employees are given a random avatar for orientation to the hospital’s public spaces and patient-care areas. When VPF updates are completed, employees will be able to select the role, gender, and skin color of their avatar. They can choose an avatar that closely mirrors themselves—or not.

In January 2011, the project team introduced VPF during a town-hall meeting—a forum used by senior leaders to provide updates on the new-hospital construction project. We unveiled VPF through a role-playing skit with avatars and machinima of the virtual children’s hospital. Since then, the project team has provided virtual building wayfinding and navigation tours through a 16-laptop computer lab, guided tours, and machinima demonstrations at departmental and physician meetings. By May 2011, 1,700 nurses, physicians, and other hospital personnel had completed a virtual-building orientation. The virtual experience has prompted dialogue between leaders and employees about getting ready for the move to the new hospital.

Nurses who’ve taken hardhat tours of the new hospital, which is still under construction, have commented on the similarities between the virtual hospital and the real thing. One tour leader remarked, “Last week, several people referenced their Virtual Path experience related to wayfinding, particularly when it came to elevator bank locations. One person said, ‘Oh, it looks just like the virtual hospital,’ which we thought was a good sign—and also kind of funny.” Our community partner liaison said after her recent virtual orientation, “As someone who’s in the new hospital a few times each week on most of the floors, I can tell you it was an incredible experience, and strangely familiar. It was also a lot quicker than walking the actual floors!” The Kids Advisory Board also has had positive things to say about Virtual Path; its members pointed out that the virtual experience gave them a real sense of what it would be like inside the building.

The VPF project exemplifies the use of emerging technology to prepare nurses and other healthcare personnel for large-scale new-hospital moves. We’ve learned much during the build and deployment of this innovative virtual media. We’ve found that vision and sponsorship by senior leaders are critical to success. The chief of new-hospital occupancy and transition planning is a nurse and an enthusiastic senior-level VPF sponsor.

Good business partners knowledgeable in virtual media are important, too, as they can identify time- and cost-saving approaches for achieving project goals. The information technology team also was crucial; we worked closely with them to reach solutions for obtaining Internet access, wiring the computer lab, and configuring laptops for the graphic-rich 3D virtual media.

Finally, the organization must be comfortable with the risk-taking that comes with being an early adopter of new technology. Trailblazing the use of new technology presents issues that demand creative problem solving, as well as project team members who are comfortable pioneering new ways of learning.

During hospital construction, it’s essential that nurses, physicians, and other hospital staff begin to orient themselves and prepare for the transition, even though they’ve been spending relatively little time in the actual building. The new hospital’s architectural partner, ZGF Architects, noted that “training is absolutely critical to the success of the move and the effectiveness of the design to support a new model of care. The Virtual Path to the Future could prove to be a much more effective training tool than the traditional model that uses two-dimensional floor plans.”

The MORO team plans to create orientation machinima of the patient experience for nurses, patients, and families. After the move to the new building, the virtual hospital will be used for new employee building orientation and emergency-
preparedness drills.

The VPF project aligns with our organization’s core competencies of service, innovation, and teamwork. Senior leaders recently recognized the MORO team with the 2011 Earl J. Frederick award for outstanding teamwork. To celebrate, we created a team photo of our avatars on the top floor of the virtual hospital!

Diana Halfer is administrator of clinical and organizational development at Children’s Memorial Hospital in Chicago, Illinois.